Nearly 2,000 garment workers from the W&D factory in Meanchey district yesterday continued a strike for the third day over unpaid seniority indemnity.

Tan Da, a worker who claims to have worked for five years at the factory, said he and other who have worked there longer have not received their dues as required by the Labour Law.

“The striking workers demand their seniority bonus because next year our contracts are changing from being an indefinite period to six months at a time,” he said. “This means that we want our seniority indemnity paid before 2019 for all the years we have worked already.”

The government earlier this year amended the Labour Law, forcing factories to pay workers a seniority payment every six months.

Eng Kim Sanh, who has worked at the factory for 13 years, said negotiations with the company have not been fruitful.

“We want the company to clear all our seniority back-pay,” she said.

Deputy district governor Dy Roth Khemrun said officials are aware of the dispute and are working with both sides to find a solution. 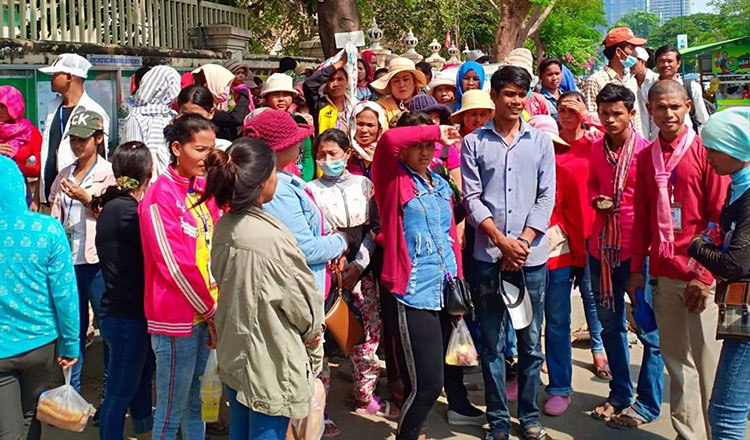 “I want all workers to be quiet, and wait for results because all related sides are working on this case and an agreement will be reached soon,” he said.

In a separate case, workers from the Prestige Garment factory in Kandal province yesterday continued protests over the sacking of a colleague who tried to form a union.

Pav Sina, president of the Collective Union of Movement of Workers, said yesterday that he plans to lead hundreds of workers to protest in front of Prime Minister Hun Sen’s house because officials have still not found a solution after four days of protests.

“In the case that relevant authorities do not speed up resolution for the workers, I will direct the workers to the house of Prime Minister Hun Sen for intervention,” he said.

The workers are demanding that their colleague Houn Sovit be given his job back and that the company allows them to form a union to push for better working conditions.

Some of the complaints over working conditions from the workers include pay being deducted when they take emergency leave and managers forcing workers to toil over their ability. They also want to see an end to insecure two-month contracts.