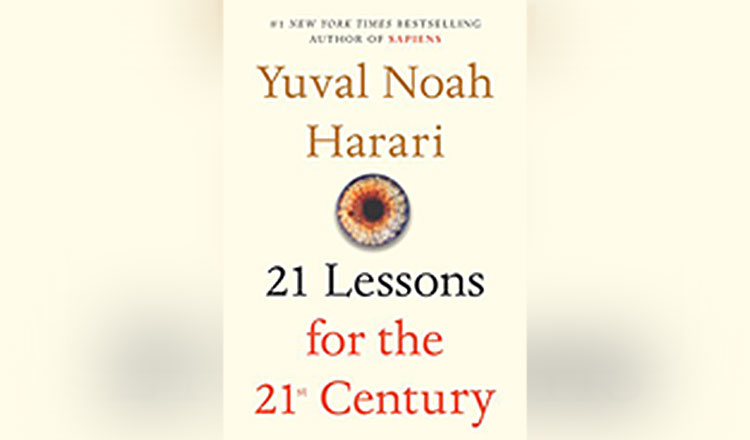 This seems to be the most talked about book this year and certainly is the top of my recommended list. Whether we like it or not, we are now facing profound questions: In the age of Industry 4.0, would Artificial Intelligence take over the mundane tasks of humans, resulting in humans becoming mentally lazy? Is liberal democracy dead with the rise of Trump? Is liberalisation and globalisation a huge racket empowering a tiny elite at the expense of the masses? Why do Britons, Americans, Russians, Sri Lankans and numerous other groups turn towards nationalistic isolation? Would nationalistic isolation doom humankind and the entire biosphere to disaster, with nationalists claiming climate change, while it affects others, leaves them untouched?

21 Lessons for the 21st Century is a must read, if you care about the future of your children and the world that’s going to be bequeathed to them. It’s also a perfect sequel to Harari’s Sapiens and Homo Deus. The enigma of Southeast Asia is this: Asean has become a region of opportunity with a $2.4 trillion economy – the fifth largest economy after the US, China, Japan and India. But much of the region is plagued by a state of demi-democracy and little has been done to address the fundamental problems plaguing it.

And Vatikiotis points out that this democracy deficit cannot be explained away by the kinds of chronic war and related social dislocation afflicting troubled parts of Africa and the Middle East. On the contrary, for the past four decades Southeast Asia has been at peace and growing at a solid 6 to 8 percent per year.

Yet remarkable economic growth and much-improved social indicators have not for the most part translated in Southeast Asia into substantial political progress, defined in a broad sense as pluralistic democratic government, writes Vatikiotis.

This book needs to be taken seriously and Vatikiotis’ experience in the region will speak for itself in the chapters in “Blood and Silk”. His long on-the-ground reporting experience in Southeast Asia, first for the BBC and then with the Far Eastern Economic Review (FEER) – where he rose up the ranks from correspondent to editor – shows in his writing. After the FEER was shuttered, he became a conflict mediator for the Geneva-based Centre for Humanitarian Dialogue. The standoff in the South China Sea, if not well choreographed by China and the United States, could lead to open hostility with the risk of global turmoil caused by a maritime war.

Hawksley reminds us that Beijing needs the trade routes to be connected to the global economy and the US needs China for a myriad of issues that stretch far beyond seven garrisoned outposts in international waters.

“Beijing has no more reason to use its islands to threaten international shipping than America has reason to take them out with air strikes,” he writes.

Books have been written about the South China Sea, but Hawksley’s Asia Waters really stands out in trying to explain China’s rationale in building garrisoned outposts in uninhabited reefs and atolls. For one, the former BBC correspondent explains in detail China’s century of humiliation that started with the First Opium War and ended 110 years later in 1949 when Mao Zedong came to power.

What China learned from the Opium Wars was that the international order is unfair. China had to make compromises to join the World Trade Order in 2001. It found itself excluded from the US-sponsored Trans-Pacific Partnership trade deal, from which the Trump administration has withdrawn Washington.

“China is not safe and has been invaded many times,” Hawskley quotes a professor of history at Guangzhou’s Jinan University. “The way to protect ourselves is to build a great wall of the sea, and you do that with big ships and strong islands.” 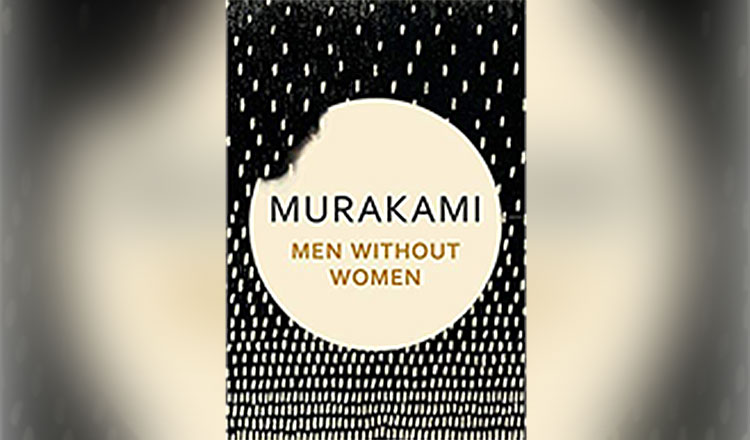 Haruki Murakami is my favourite Japanese author and I was completely blown over when I read his mammoth epic 1Q84 – a cult romance in three books.

The Guardian once asked: “Do Murakami’s stories themselves make people feel as if their lives have some meaning?” Year after year, his fans anxiously await the decision of the Nobel Committee to award him the Nobel Prize for Literature. And every year, there is disappointment.

My favourite Murakami this year was Men Without Women, a collection of seven short stories about men and love – almost all long time single men pining for female company. It starts with a veteran actor who finds himself beholden to his female chauffer and tries hard to get over his late wife’s extra-martial affairs. It then moves on to a cosmetic surgeon who is faced with love and its imperfections – and finally dies of a broken heart. One of the stories is about a recently divorced salesman who opens a jazz bar as memories of an ex-lover “riff and swell”. The other is about a student who keeps failing his college entrance exams, and feels he’s not worthy to be the boyfriend of his childhood sweetheart. He then introduces her to an acquaintance saying: “I figure, if she’s gonna go out with other guys, it’s better if it’s you. ’Cause I know you.”

To appreciate Murakami, you have to love music and his writings are juxtaposed with ramblings about The Beatles (remember his seminal Norwegian Wood?) to jazzman John Coltrane. 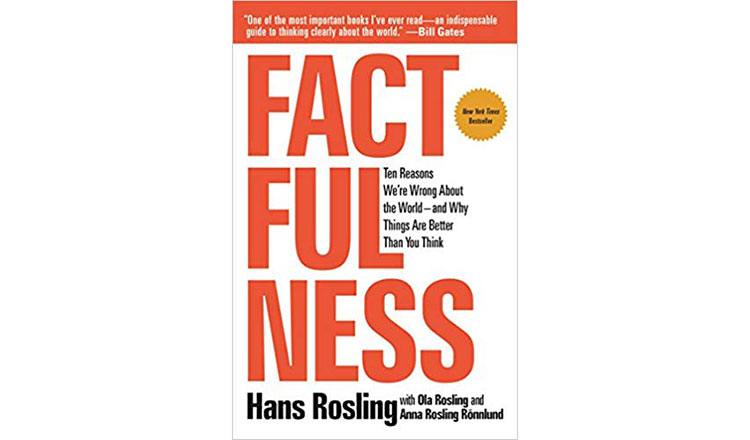 The late Hans Rosling, together with his son Ola Rosling and his daughter-in-law Anna Rosling Ronnlund, founded the Gapminder Foundation in 2005 with a mission to fight devastating ignorance with a fact-based worldview. Hans Rosling was a medical doctor, a researcher and a lecturer in global health.

Factfulness points out, very convincingly, that people misinterpret the facts even when they are right in front of them. It is the overdramatic worldview that draws people to the most dramatic and negative answers to fact questions, writes Rosling. And the media, according to Rosling, is very much to be blamed for that.

“People constantly and intuitively refer to their worldview when thinking, guessing, or learning about the world. So if your worldview is wrong, then you will systematically make wrong guesses,” he adds.

Written in an easy-to-understand format, this book is a must for journalists working with data.

“When we have a fact-based worldview, we can see that the world is not as bad as it seems – and we can see what we have to do to keep making it better,” Rosling concludes.

This is what Bill Gates had to say about the book and its author: “Another remarkable thing about Factfulness – and about Hans himself – is that he refuses to judge anyone for their misconceptions. Most writers would beat people up for their ignorance, but he doesn’t. Hans even resists going after the media. Instead, he tells you about the history of his own ignorance. He explains that these instincts make us human, and that overcoming them isn’t easy.” 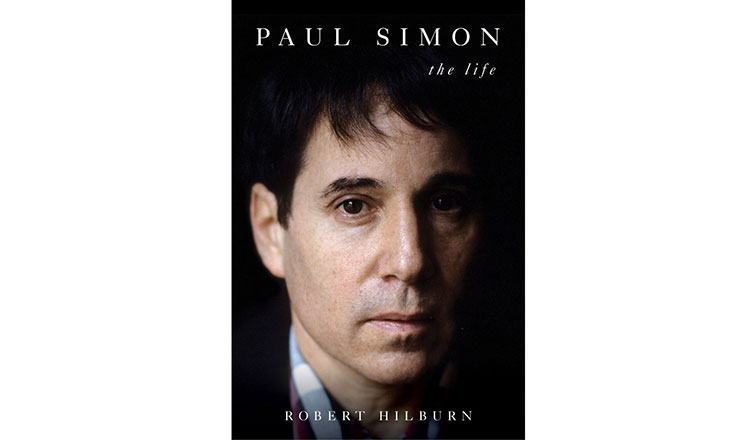 Paul Simon has always been one of my favourite songwriters/singers and as a kid I had always been moved by the melodies of Simon and Garfunkel – from the Sound Of Silence, to The Boxer, I Am A Rock and Mrs. Robinson.

The Life is Paul Simon’s biography written by Robert Hillman who spent over 100 hours across the course of a year interviewing one of the all-time great American songwriters, inducted into both the Rock N’ Roll Hall of Fame (twice) and the Songwriters Hall of Fame, and the only artist to receive Album of the Year Grammy awards for records made in three separate decades.

Has Paul Simon been forgiven by his fans for breaking up the Simon and Garfunkel partnership?

Hillburn’s interviews with Art Garfunkel were more difficult since Garfunkel and Paul Simon are still not on talking terms. Moreover, Garfunkel wasn’t too keen to resurrect memories of their tortured relationship.

But the book does offer insights into Paul Simon’s life. For one it does dwell into his experiences with the potent psychotropic Amazonian brew ayahuasca and LSD. The Rhythm of the Saints is a song about his ayahuasca experience and Simon told Billboard magazine: “Ayahuasca has always been there. Nobody outside of the Amazon knew anything about it. And there are several main sets of healers that use ayahuasca. I wouldn’t say that it heals – but I wouldn’t say that it doesn’t. It seems to work sometimes for some people, seemed to really not work for other people. I’m not a proponent and I’m not a detractor. I just wrote the song because this had been my experience.”

Paul Simon – The Life is a musical journey with Elvis Presley, Everly Brothers, Chuck Berry, The Kingston Trio, Bob Dylan, Carole King, Joan Baez, and The Beatles. Put on Simon’s Graceland if you’re reading Paul Simon – The Life. It won’t disappoint you – both the book and the album.