Home - Never too young to lead

Never too young to lead

80 Cambodian students from 11 different universities, dressed in pepper-and-salt suits and stiff collars, stepped into the world of Asean delegates last week at the Pannasastra University of Cambodia (PUC), Phnom Penh.

During the three-day meeting, students got the chance to hold a simulation of the whole agenda of the Asean Summit and interact with each other by role-playing high-level government officials of 10 Asean member states. The event not only has the goal of helping the delegates understand and learn more about Asean affairs but also with the purpose of honing their critical thinking, improving their ability in negotiation and diplomatic communication.

“Normally, what I learn at school are just theories. So this is a chance to see this thing in real life,” said Chou Vithoureakborndidh, a fresh Cambodian graduate at Ho Cho Minh City University of Social Sciences and Humanities.

21-year-old Heng Makkhy expressed similar views as Chou. “Through this model Asean Summit, I had the chance to understand different stances of each country in Asean from other delegates who were participating in this event. This event also served to be an effective platform for youths to learn how to do diplomacy, as well.” Asean has been getting more and more attention from the world in recent years. It is the region where 60 percent of the population are below the age of 35, making the youth shoulder more responsibilities to build a harmonious Asean community. From this point, Cambodia plays a critical role in the region as it has one of the largest population of young people in Southeast Asia, with 35 percent of the total population aged between 10 to 24.

“It is undeniable that not so many Cambodian students are paying attention to the Asean Summit’s results although we know that we will soon take responsibility of the country,” said Heng, “but by having this CNMAM event, it has brought about many benefits especially to youth.”

“But the latter two pillars are not functioning very well. One way that we can strengthen it is to understand each other. And youth plays a significant role in it, as they’re the generation with the most potential. When youth can integrate and connect very well, then the other two pillars could be achieved smoothly.”

Linnette Franco, Cultural Affairs Officer at US Embassy in Cambodia, also pointed out the importance of nurturing our young people in Southeast Asia to sustain peace, development, and stability for mutual benefits during the opening ceremony.

Before the meeting, the students spent almost two months researching the countries they represent and the three subtopics (Cyber Threat; Digital Economy; Falsehood News) under the theme “innovation”. To prepare the delegates for the meeting, CNMAM threw two coaching workshops to equip the representatives for the conference. They invited scholars and experts from different fields to give lectures and to train the students to be familiar with the whole process of the simulation of the Asean Summit.

“Before joining and doing research on this theme, I thought the digital economy is just referring to e-commerce, like doing business using the digital platform. It was eye-opening to realise that it is something beyond that,” said Heng, an undergraduate student at the Royal University of Phnom Penh.

The first CNMAM is a strategic activity to expand students’ knowledge on diverse cultures and national affairs, as well as promote friendship among the young undergraduates from various universities.

Nget Sokphorn, international relations student at PUC, said, “In term of soft skills, we can learn from each other among students from different universities in Cambodia, and learn how to work as a team.” 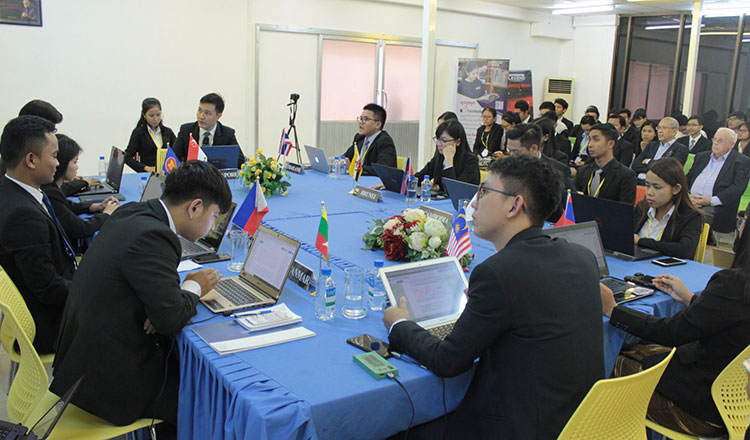 A bunch of activities organised by the local government or international NGOs targeted young people in order to build youth capacities then develop the country. However, as Kim added, “We’re open to young people, but not open enough. We should give more space and opportunities to them. And you can guide them when you’re giving them space.”

As the last rays of the sun started to fade from the building’s top, the first Model Asean meeting in Cambodia ended triumphantly. The delegates walked out the campus with new perspectives, fruitful friendships, more comprehensive knowledge, and also with more critical mindsets.

“As a young Cambodian and also a proud Asean citizen, I wish to inform my countrymen that Asean is important, and preserving peace within this community is necessary because Cambodia also benefits from the Asean,” Chou said.