Speaking at a ceremony yesterday to mark the event, Commerce Minister Pan Sorasak said his ministry applied for GI status for Koh Trong Pomelo with the World Intellectual Property Organisation (WIPO) to “protect the identity of the product and diversify Cambodia’s agricultural exports.”

According to Mr Sorasak, Koh Trong Pomelo has been famous in Cambodia since the 1960s.

“Koh Trong Pomelo is a traditional agricultural product and has great potential to boost local incomes and help increase the number of tourists to the area,” Mr Sorasak said.

He called for more farmers in Koh Trong commune to take up pomelo farming, but stressed that they must follow all relevant guidelines and requirements to ensure their taste, quality and international reputation.

The pomelo is a citrus fruit, similar in appearance to a large grapefruit, native to South and Southeast Asia.

Op Rady, director of the Intellectual Property Rights Department at the Ministry of Commerce, told Khmer Times yesterday that obtaining GI status requires a significant investment in terms of money and time. 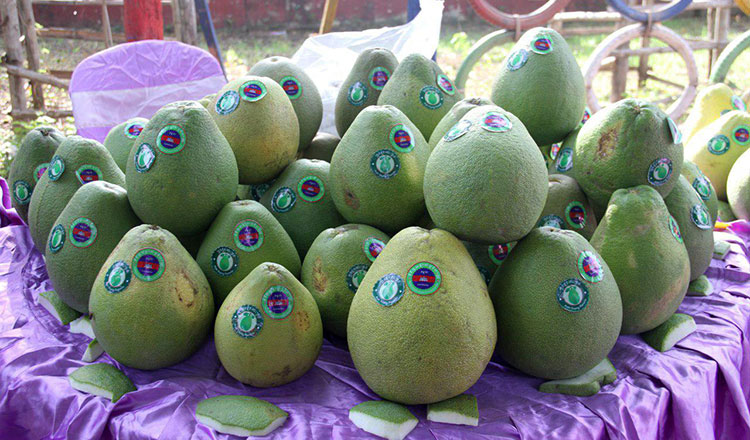 Cambodia now has more than 20 products that could earn the certification in the future, including Kampot salt, Kampot durian, Banteay Meanchey’s Phnom Srok silk, Battambang’s fragrant milled rice and Prahok, according to Mr Rady.

“We have 331 families in Koh Trong commune growing pomelos, and 13,790 pomelo trees. However, only 155 families are members of the Koh Trong Pomelo Producer Association,” Mr Rady explained.

Bun Ban, director of Koh Trong Eco-Tourism Community and vice president of the Koh Trong Pomelo Producer Association, said having GI status for the pomelo will promote Kratie as a tourist destination, and boost living standards in Koh Trong.

He said Koh Trong pomelo sells for $2 to $3.5 a kilogram, with farmers being able to harvest it twice a year.

“It stands out because it is sweet rather than sour and has no seeds when ripe,” Mr Ban said.

The Koh Trong Pomelo Producer Association is now focusing on bringing more farmers into the association, expanding the area used to grow pomelo and selling the fruit in supermarkets and convenience stores in Phnom Penh, Mr Ban added.