Home - Sok Thy unlucky in ONE defeat

Sok Thy unlucky in ONE defeat

Sok Thy, Cambodian Top Team’s Kun Khmer prodigy, will feel desperately unlucky as he went down to Lerdsila Phuket Top Team at ONE: Pinnacle of Power on Saturday in Macau. Although it was incredibly close, the 37-year-old Thai earned a split decision victory – although the majority of onlookers will feel puzzled at the highly contentious decision.

Lerdsila, who held three Rajadamnern Stadium World Championships, amongst several other world titles, pushed the pace early in the flyweight Muay Thai contest with a melee of his famous kicks.

As the opening round progressed, he found a home for his jab, and attacked his calm rival with sporadic knees and a healthy dose of push kicks.

The pace picked up in the second frame, with each competitor exchanging kicks. Although Sok Thy succeeded in dumping the Thai legend to the ground, Lerdsila returned to his feet, and scored with kicks, knees, and punches when the Cambodian left openings. 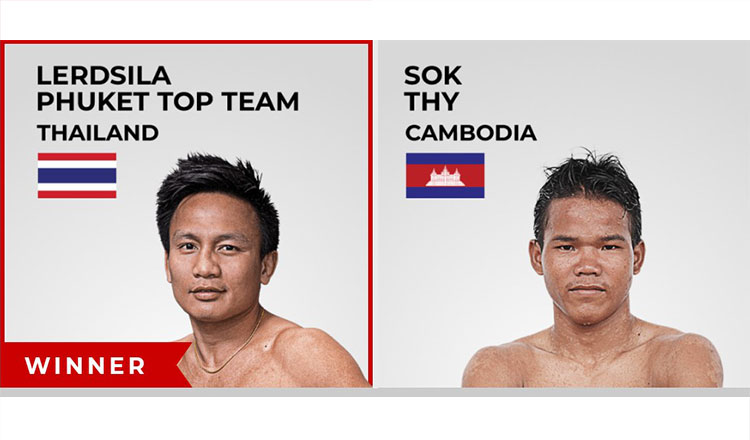 In the final minute of the round, Sok Thy started to catch on to Lerdsila’s game. He started blocking the Thai’s walk-in knee, landed with his right hand, and dumped him to the canvas for a second time.

Both warriors entered the third and final stanza with a sense of urgency. It was Sok Thy who went on the attack, connecting with left hooks, low kicks, and knees. The 20-year-old Cambodian even dumped Lerdsila two more times, but the Thai continued to utilise his push kick and jab to great effect.

The two warriors put on a heart-pumping show, and while the young Sok Thy displayed his immense talent for the world to see, it was “Mr. Lightning” who left the ring with a contentious split decision victory.

It was over for Cambodian fans however as Rin Saroth, the other Cambodian challenger on the card, put on a huge display of heart and skill to score a huge win.

The 24-year-old Cambodian defeated Indonesia’s Mario Satya Wirawan via third-round TKO in the opening bout of ONE: Pinnacle of Power, at the Studio City Event Center in Macau.

Saroth leaned on his Kun Khmer expertise, and utilised his striking whenever an opportunity was presented.

In the opening seconds of the first round, he kept his Indonesian adversary at bay with a plethora of push kicks to the legs and stomach, but Wirawan ran through them with a left kick and right cross of his own. With Saroth in reach, the 28-year-old Indonesian secured a takedown.

Wirawan used this as a chance to display the vast wrestling improvements he made at Bali Mixed Martial Arts. He controlled the Cambodian Top Team product, and picked his shots with punches and elbows. Although Saroth returned to his feet on a couple of occasions, the Indonesian planted him back on the canvas every time. 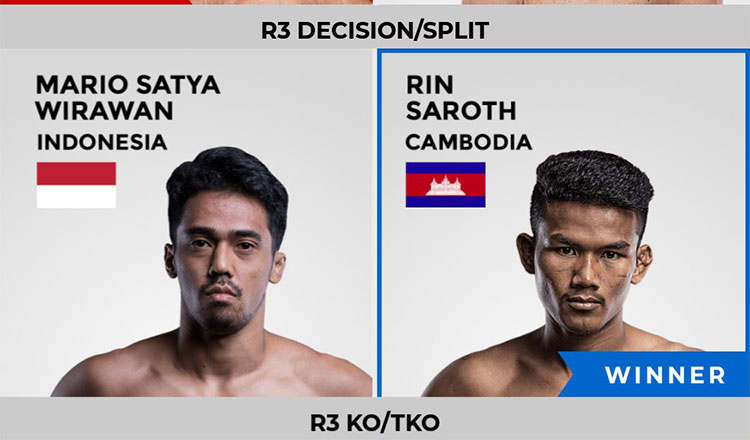 The Bali Mixed Martial Arts representative continued to showcase his grappling in the second frame. He immediately took his rival to the floor, and patiently bided his time to advance his position and throw ground strikes.

Saroth, however, did a masterful job of controlling Wirawan’s posture, and brilliantly attacked with elbows from the bottom.

Following a brief medical timeout late in the stanza to check a possible injury to Wirawan, the action resumed, and the 24-year-old Cambodian continued to cause damage with his sharp elbows.

By the time the third round began, it was clear the strikes had taken its toll on the Indonesian.

Saroth threw punches, and even an overhand elbow, to start the frame. A tiring Wirawan tried to avoid the Kun Khmer specialist’s strikes, and went for a double-leg takedown.

The Cambodian widened his stance to prevent the takedown, and began to unload fierce punches and elbows to Wirawan’s head. Wirawan absorbed the blows, doing little to protect himself.

At this point, ONE referee Kemp Cheng decided he had seen enough. He waved off the contest at the 2:30 mark of round three, and awarded the victory to Saroth.

In the main event, a riveting battle took place between two outstanding mixed martial artists as flyweight rivals Geje “Gravity” Eustaquio and Adriano “Mikinho” Moraes put everything on the line to unify the ONE Flyweight World Championships. Both men went back-and-forth, swapping solid blows and momentum-shifting takedowns from bell to bell.

Neither of the two would give each other any quarter for five rounds as both men traded their best offense all throughout the highly-anticipated title unification contest. After a gruelling encounter inside the ONE Championship ring, Eustaquio sent the crowd into a rapturous chorus of cheers by clinching a split decision win over Moraes to become the undisputed ONE Flyweight World Champion.