SOCHI (AFP) – Germany coach Joachim Loew said his team were rewarded for not losing their nerve at the most critical moment as a 95th-minute free-kick from Toni Kroos secured a 2-1 win over Sweden on Saturday that brought the World Cup holders back from the brink.

The 10-man reigning champions were in deep trouble when Kroos stepped up to steer in his dramatic winner in the final minute of added time at Sochi’s Fisht Stadium.

Before that, a Kroos error had led to Ola Toivonen giving Sweden a 32nd-minute lead and even a Marco Reus equaliser early in the second half appeared to be only a temporary stay of execution for Loew’s men.

But the rescue act from Kroos is a huge lift to a side who saw Jerome Boateng sent off late on. They now have qualification for the last 16 back in their own hands ahead of their final Group F game against South Korea on Wednesday.

“We never lost hope. I think there was a bit of luck there with the goal scored in stoppage time, but it was a result of our belief in ourselves, said Loew. “Despite the adversity, the team kept their cool and turned it around.”

There is still no guarantee that they will avoid the fate of the last two World Cup holders, with Spain four years ago and Italy in 2010 both being knocked out in the group stage.

Not since 1938 have Germany been eliminated in the first round. However, this result will provide an almighty boost to them and is a hammer blow to Sweden, who will face Mexico in their last match with all still to play for.

The late goal was especially sweet for Kroos, who was among the players to come in for stiff criticism in the wake of recent performances.

“We were criticised a lot, justifiably so in part, and a lot of people in Germany would have been pleased if we had gone out today,” he said.​Elsewhere in group F, South Korea’s World Cup hopes are still alive despite defeat to Mexico on Saturday but their coach Shin Tae-yong says there are problems with the country’s domestic game that cannot be ignored.

Korea were beaten 2-1 by Mexico after goals from Carlos Vela and Javier Hernandez put the result beyond doubt in Rostov before Son Heung-min’s stunning late strike.

Son was in tears after the match but his consolation goal could yet prove significant in Group F.

Germany’s last-gasp win over Sweden means South Korea can still qualify if they overcome the world champions next week and the Swedes also lose to Mexico.

But that would mark an incredible turn-around given Tae-yong’s side are yet to register a point from their opening two games in Russia. 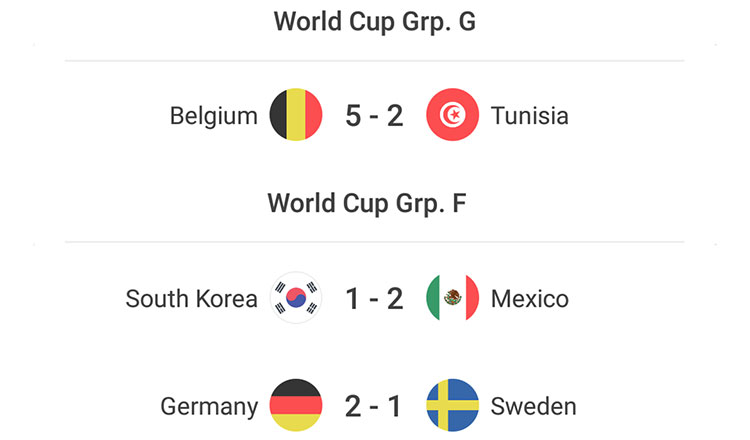 “We have systemic problems,” Tae-yong said. “We must think how we can improve our domestic league and work with young players. We lack experience. That doesn’t come overnight.”

In Group G, Roberto Martinez revealed that Romelu Lukaku is an injury doubt for Belgium’s World Cup blockbuster tie against England after the in-form striker picked up an ankle injury on Saturday.

Lukaku and Eden Hazard both netted twice as the Red Devils routed Tunisia 5-2 in Moscow to leave them top of Group G and on the verge of the last 16.

But the Manchester United forward came off in the second half at the Spartak Stadium in Moscow.​“We need to look at Lukaku’s ankle. He took a knock and has to be assessed,” said Martinez, who revealed man-of-the-match Eden Hazard also picked up an injury.

“Eden Hazard has a calf knock, Dries Mertens has an ankle problem. There will be major changes against England.

“If we could have seven days to prepare, I’d say we’d start with the same team, but the reality is that you are only as good as the 23 players.” 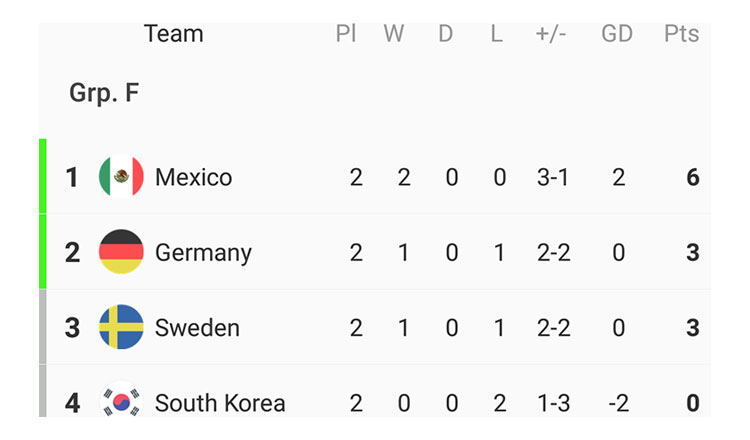 Lukaku’s absence would be a blow to Belgium’s hopes against England, with top spot in the group likely to be up for grabs.

He now has four goals at Russia 2018, making him joint top scorer alongside Portugal’s Cristiano Ronaldo.