City Hall yesterday held a meeting regarding the creation of a working group to monitor the growth of trees along roads in the capital in a bid to create a green city and avoid trees from falling during strong weather.

Officials from both departments are expected to be tasked with observing and ensuring the proper growth of trees on a regular basis.

Met Meas Pheakdey, City Hall spokesman, said yesterday that the measure was created in order to prevent accidents from occurring during storms.

“We were informed of reports saying that trees were falling on parked cars along roads, so the governor held a meeting yesterday,” Mr Meas Pheakdey said. “But we haven’t decided on the creation of the working group yet and meanwhile, the Department of Public Works will keep an eye on the trees.”

He said that the measure would also serve to make Phnom Penh a greener city.

“Our purpose is not only to solve the issue of falling trees, but also to make Phnom Penh a green city,” Mr Meas Pheakdey said. “So the working group will study tree growth in areas suitable and beneficial to the public.” 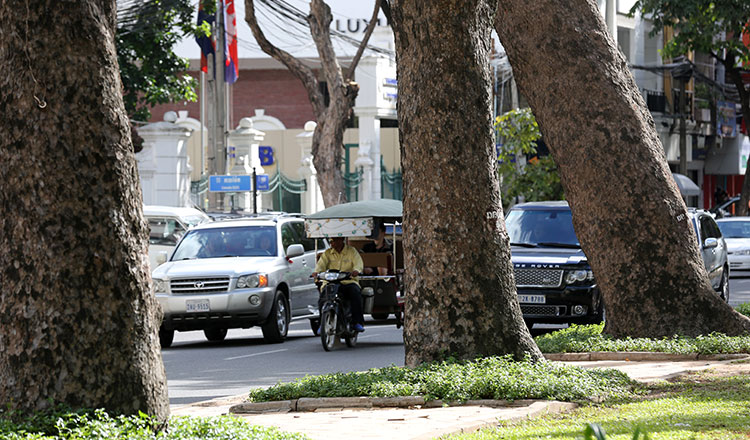 He added that the working group officials could monitor trees on a regular basis and that they would have the authority to plant or cut a tree, noting that natural disasters are unpredictable.

“Right now, we don’t know when there will be rain but strong wind will make trees fall. People should be careful where they park their car, but regardless of what we do to educate them, they always blame us,” he said.

Multiple reports of trees falling on cars have been submitted over the last few months. In one case, a tree fell on electrical wiring and crashed into a parked car underneath, causing serious damage and drawing public criticism over City Hall’s handling of natural disasters.

“People don’t understand how natural disasters can’t be controlled and it’s out of the hands of City Hall,” Mr Meas Pheakdey said. “Don’t compare our country to other foreign countries where their cars have insurance for that type of accident while our country does not have this yet.”

San Chey, executive director of Affiliated Network for Social Accountability, said that trees are important and authorities need to monitor their growth.

“We need trees in the city but the authorities need to pay close attention to their growth on a regular basis,” Mr Chey said. “If we grow them and don’t look after them it is useless.”

Students get three days off for election

Factories to be fined if lacking medical bay