Ms Ry, 66, was in her home baking a cake when a strange woman with flowing hair started to pass through her home.

“I remember it well,” she says. “I was sitting making cake in front of the house, and then there was a woman wearing a black shirt and white jeans, her long hair flowing as she passed through my home.”

“When I looked right at her, she suddenly disappeared and I glanced to the left and the right, but there was nothing,” she adds. “That’s when I realised it was a ghost. I thought she might be hungry for the cake, so the next time she showed up while baking, I threw some cake toward her and she would disappear again and I haven’t seen her since.” 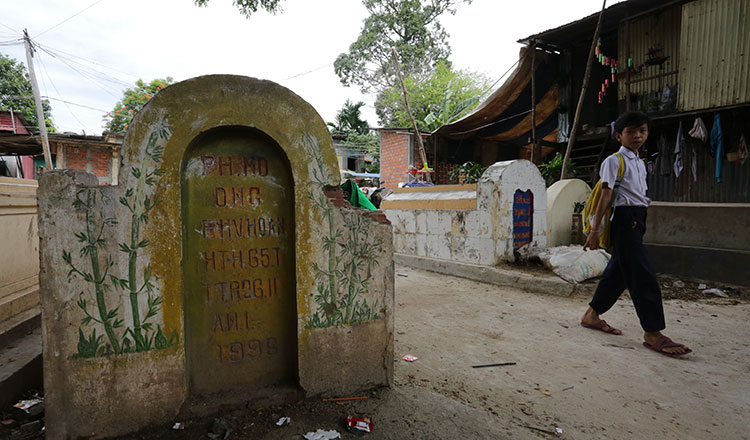 Ms Ry first moved into the cemetery in 1990, and has had multiple encounters with ghosts, but says she is not afraid and is happy to continue living alongside the graves.

“We were a bit scared in the beginning, but not any more,” she says. “I have no where else to go so this is my home. I always burn incense and pray for happiness.”

Ms Ry and her family are just one of about 112 families living in the cemetery, where about 90 homes are located.

The families relocated to the burial grounds in the 1990s as their homes either collapsed into the river or their land was taken over by the state to construct the Chbar Ampov market.

The donations were a show of good faith as Mr Sreng then informed the community that City Hall has prepared new homes for them in Prek Pnov district’s Andoung village, where small homes for each family have already been constructed.

“Prime Minister Hun Sen saw people living in the cemeteries and wanted to help improve their lives,” says Mr Sreng. “The relatives of the dead also find it difficult to honour their loved ones during ceremonies with the community living there.”

“So, Prime Minister Hun Sen told me to prepare and offer new homes to the community members,” he adds. “They are not being forced to leave, we are just offering them new homes.”

However, after the offer, the community came to an agreement to reject the offer, citing the small size of the new homes and lack of land around them.

Sun Ramaly, the head of the community, says that she and her neighbours appreciated the offer made by City Hall, but notes that the new homes are just too small.

“It is unacceptable because the houses provided by City Hall are very narrow, and the families here have many members,” she says. “They have many members, with at least five to six people, and some have more than one family in their current homes. They cannot fit in the new homes.”

Ms Ramaly says that the community has decided to remain at the cemetery because the infrastructure around it is better than the new location and most of the families are too comfortable with their current arrangements and careers.

In the meantime, Ms Ramaly has submitted a request to City Hall for authorities to instead develop new homes for the community in or near the cemetery, or provide them with land elsewhere, even if with no homes built.

Sitting between the four graves in front of her house, community member Toek Channa says that she and her family of seven resettled in the cemetery in 1994 after the state took her old land to use for the development of Chbar Ampov market.

At first, she had a small cottage-like home surrounded by ten graves, but relatives of the deceased moved six of the graves to have their loved ones cremated at a pagoda and Ms Channa was able to expand her dwelling.

“Living here is not difficult,” she says. “I have been living here for more than ten years, and the ghosts have not done anything to make us afraid or make our lives difficult.”

“People here have businesses that are moving forward, and if we have to move to another place, it would take us a long time to be stable again,” she adds.

Ms Channa says many of the community members work at the nearby Chbar Ampov market, or run small businesses out of their homes, including baking cakes for sale.

Thinking back to when she first moved into the cemetery, Ms Channa says she was very afraid of ghosts because she had a frightening encounter and the community was not as large.

“During the first year of living here, we were scared,” she says. “I remember one time, it was about 12am, and I saw a man sitting, smoking a cigarette on a grave. I was scared, but I think it was his grave, and he stayed there and I stayed in my home.”

Ms Channa adds that as the community has grown, her encounters with ghosts has trailed off.

Leak Vongsa, 48, says he acquired land next to the cemetery in 2012 and has been working as a community doctor since then.

“Some people have nowhere else to live, and they saw the land was vacant, so they came to clean the cemetery and make room for living,” he says. “After being here so long, it is home for people and relatives of the dead really don’t mind.”

Mr Vongsa says that every year during Chinese New Year and the Ching Ming Festival, also known as Tomb-Sweeping Day, relatives of the dead come to visit their loved ones and bring food that they also share with community members.

Community resident Khlaing Sokhorn says that the families living in the cemetery are happy and would rather see City Hall develop their current dwellings rather than move them so far away from the market, where many are employed.

The new homes are at least 15 kilometres away from the market, she notes.

“If there is development on the site, we would be happier than them providing a new home for us,” she says.

Met Meas Pheakday, spokesman for City Hall, says that he has not yet received the letter penned by the community asking for on-site development or land rather than the new homes, but notes that it will be reviewed.

“The Phnom Penh Municipal administration has already prepared houses for them in Andoung village because they are now living on the graves of others,” he adds. “But if they have other requests, we will review the letter first and then we will look at the possibilities.”

However, Mr Sreng has already stated that on-site development is not in the cards as it does not solve the issue of the community occupying the cemetery. 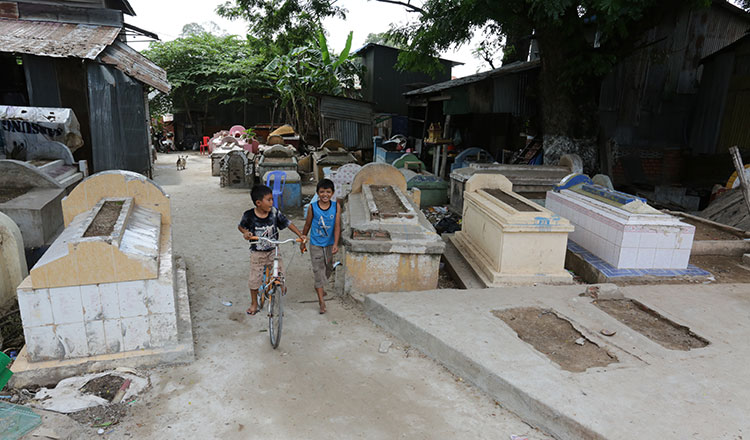 Sam Vichet, regarding this case, a program coordinator with Housing Rights Task Force, says that the location of the new homes are very crowded with residents living there already, meaning there are many job opportunities.

“But the cemetery dwellers have the right to choose where they want to live,” he says. “They can live wherever they can do business, and even though it’s not right to live in the cemetery, it is their right to have a place to prosper and live peacefully.”