Labaab Restaurant is a hidden sanctuary of forgotten flavours, located high enough to distance the venue from the hustle and bustle of Monivong Boulevard, but close enough to the ground so as to not get its head high up in the clouds. Rama Ariadi discovers the exquisite dishes in this ‘hidden’ restaurant whose exterior completely belies the interior.

The Lower Mekong Delta has always been a melting pot of different influences, for throughout its coloured history warring kingdoms and states extended their influences beyond their traditional borders. Then came the colonial powers that established its presence in the region – France was here, the Dutch even attempted to incorporate the region into the East Indies Company (albeit to no avail). The interplay of these various factors, combined with the plentiful bounty of the Mekong Basin, resulted in cuisines that are as unique to the region, as they are distinct from one another. 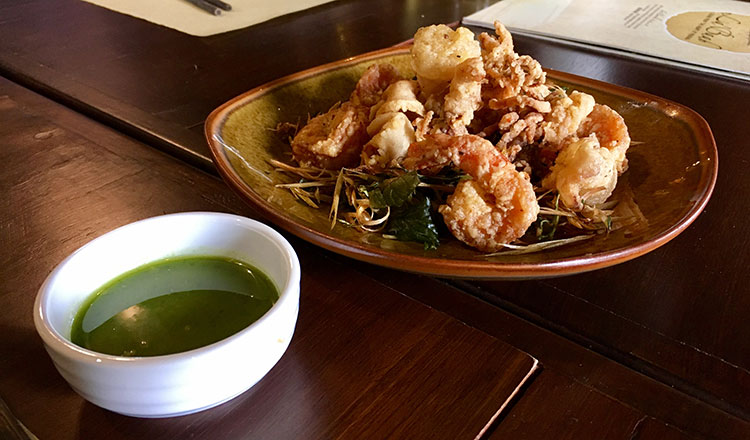 Thai food – for example, are widely represented on tables all across the globe, from hole-in-the-wall eateries to top dining rooms that require a reservation months in advance. Just as prevalent and high-profile as Thai cuisine is the culinary traditions of Vietnam – after all, who in this world has never mispronounced the word ‘pho’ and claimed that banh mi is the best legacy that the French left behind in what was then, Cochinchina?

Sandwiched between these two culinary powerhouses is Cambodia, whose history was tinged with a darker colour compared to its neighbours. For three turbulent years under the Khmer Rouge, there was a massive ‘re-organisation’ of the Cambodian society where every distinguishing feature that reflected any degree of socioeconomic stratification was erased. The result is the almost complete destruction of a rich culinary tradition of a proud nation.

“Many written records of recipes were completely destroyed,” said the co-owner of Phnom Penh’s Labaab Restaurant, Rith Yeoun. “In many cases, the only surviving records of Cambodia’s rich culinary tradition exist only in the minds of the older generation cooks and chefs, many of whom are spread across the country.”

As an architect-cum-entrepreneur, this presents Mr Yeoun with a challenge – it forces him and his business partners to work extra hard to compile and develop the menu that sets Labaab apart from many restaurants and eateries that dot the city. “For almost a year, we travelled across the country to meet with different cooks and chefs – many of whom do not formally work in restaurants but are employed by government officials and what not – to acquire for the purposes of developing a coherent menu that represents the almost forgotten flavours of the Lower Mekong,” he continued.

It was through this extensive research that Mr Yeoun found out that so many variations of a particular dish exist – because each person would modify their methods and ingredients to suit their palate preferences. “There are many variations of the amok, for example,” he continued. “Some are very red in colour, some versions are prepared without the traditional banana leaf wrap – it varies from one cook to another.”

That said, there is one tie that binds Cambodian cuisine together that makes it distinct from its more high profile relatives. “It is the use of astringent kreung paste and prahok – which imparts an umami flavour that sets Cambodian cuisine apart from the rest of region,” continued Mr Yeoun.

However, it would be a gross oversimplification to say that the use of kreung and prahok is the only distinguishing feature of Cambodian cuisine, as the Kingdom under the French protectorate was truly a melting pot of different cultures, and consequently, different cuisines. “There are Chinese influences, there are Vietnamese influences, and many others – which has been indigenised and adopted into what we know now as Cambodian cuisine,” he said.

“To dismiss Cambodian cuisine to the backseat wouldn’t be fair because the culinary tradition of the Kingdom is actually a synthesis of different flavours from different cultures and influences that dominated the Lower Mekong basin,” he continued. “Down in the southeast, the Vietnamese influence is apparent in the use of fish sauce and the ‘clarity’ of the dishes, while the cuisines of the western part of the kingdom is influenced by the Siamese tradition of balancing the five dominant flavours into richer, more complex creations.”

During his extensive travels to seek out new recipes to include in Labaab’s menu, Battambang in particular took Mr Yeoun’s attention – as it was (and arguably, still is) the hub of arts and culture in Cambodia. And this is reflected in the design of Labaab itself. Set in a nondescript shophouse two storeys above a pharmacy in Phnom Penh’s Monivong Boulevard, Labaab is designed to resemble a traditional wooden house that Mr Yoeun saw during his travels – a surprising juxtaposition of the old and the new. “I wanted the venue to capture the essence of this amazing wooden house – which hails back from what was known as the ‘Lordship Era’ when control over Battambang was actively fought over between the French and the Siamese,” explained Mr Yoeun.

The result, is a hidden sanctuary of forgotten flavours, located high enough to distance the venue from the hustle and bustle of Monivong Boulevard, but close enough to the ground so as to not get its head high up in the clouds. “The concept is inspired by the eateries that I saw in Ho Chi Minh City – where there are plenty of ‘hidden’ restaurants whose exterior completely belies the interior,” he said.

“Many were puzzled about our decision to make a restaurant with little signage, as well as our decision to play light jazz as opposed to traditional music – but this is more than just about avoiding cliches,” continued Mr Yeoun.

“I believe our decision goes hand-in-hand with the concept of the restaurant – as we aim to bring the almost forgotten flavours of region to the 21st century.”

While at the moment, the menu is dominated by Cambodian and Vietnamese offerings – the brains behind Labaab are continuously working to expand their offerings to encompass the various offerings from the Lower Mekong Delta.

“We strive to include new items in the menu every six to seven months,” said Mr Yeoun. “Next, we aim to incorporate more dishes from Thailand and Laos – definitely something to look forward to!”