There is undoubtedly no shortage of creative and talented musicians in Cambodia. But after Year Zero, great voices had somehow opted for silence. With great recognition and trust that the local music industry will eventually regain the spotlight here and anywhere else, The Sound Initiative was born. The Sound Initiative helps foster new talent and Agnes Alpuerto was at the music project’s inaugural concert, Soundwave, at Hard Rock Café Phnom Penh last weekend. People – a mix of different ages, genders and nationalities – were all having fun, jumping up and down to every lyric, every drumbeat, and every guitar strum. What’s the point of gluing your feet on the floor and keeping your body static when there’s good music playing live up front?

At the Hard Rock Cafe at Exchange Square last Saturday night, more than a dozen musicians, with singing sensation Laura Mam and pop-rap duo Kmeng Khmer as headline acts, stepped up on stage and performed their original songs in the midst of an overjoyed crowd.

Sam Rocker, the 28-year-old singer, was one of the first artists to go up to the dim-lighted platform, held the microphone and showcased his famous original music, Dream.

I can’t take my eyes off you

That I fall in love with you

And the crowd did fall in love with the tomboy solo artist who has already 10 original songs under his name.

“I like singing pop-rock songs. I have written so many songs already. I write depending on my mood. I plan to release another single next month. They should wait for it,” said Sam, who also proudly admitted he is an advocate of the local music. He added that he wants to help promote Cambodia’s original music both inside the borders and across regions.

After singing “Dream” and “Tell”, Sam gave away the mic to punk rock star Vartey Ganiva, whose presence on the center stage was enough to draw the crowd closer.

There was both angst and sensitivity in Vartey as she jumped and did headbangs while singing “Where’s your future?” and “Evil Husband”.

“Through energetic, kickass live shows, kickass music and kickass music videos, we can make the entertainment industry the best that it can be. I personally want to contribute songs that tackle feminism, women’s rights, environmental protection, sex education and other important things. I also want to help punk music get into the limelight again,” said Vartey in her true-blue punk-rock black outfit.

The audience, who undoubtedly memorised every lyric and note of her songs, jumped and waved their arms along. At 8 pm, Hard Rock Café’s dance floor was filled with singing and dancing and just pure euphoria.

More than 10 other singers and bands were given equal chance to give the best performances suited for a Saturday night fun. Presenting two original tracks each, emerging and highly-established figures of local music scene such as Kanhchna Chet, Sai, Small World Small Band and P-Sand offered their audience reasons to love original Cambodian music through their songs.

The weekend concert, tagged as Soundwave, was a kick-starter for the new music talent mentoring programme – The Sound Initiative.

“There’s a real destination with music. It’s like a journey, and it’s amazing that it provides a room for learning and a room for growth,” said Laura Baker, the managing director of the programme. Laura, a musician herself, was also generous enough to present a classical piece and a duet with Khmer artist Sophia Kao.

The Sound Initiative is a vocational music education programme for local singers, songwriters and music producers who want to uplift the country’s music industry through all-original pieces.

The programme will take young Cambodian artists into a month-long boot camp for music training and a selected few will proceed to an eight-month The Sound Initiative formal programme, which will include mentoring by international music professionals. “Through mentoring and training, we are creating a system of support for original works and the creative minds behind them. We see collaboration as a meaningful work and creativity the product of social encounter. These concepts are key to seeing a new generation of musicians thrive and a creative sector built,” wrote Laura in the official website of The Sound Initiative.

Project ambassador Laura Mam shares the same idea. “When artists come together creativity seems to jump. You learn a lot from being around a lot of different kinds of artists and seeing life as art; it can inspire more creativity than most people know,” she said in the website.

And she told last Saturday’s crowd, “How do we let others hear our music? First, we must educate ourselves. We have to have knowledge on the music that we create so we can deliver this music to the audience. Then, we must prepare ourselves for local and international fame.”

And she’s right. There’s just so much creativity and enthusiasm among Cambodia’s young music artists just waiting to be unleashed. The talents are already there. The intensity of their passion is already almost tangible. The motivation to be heard is immeasurable. They just need a platform, a medium for their unique sound waves. 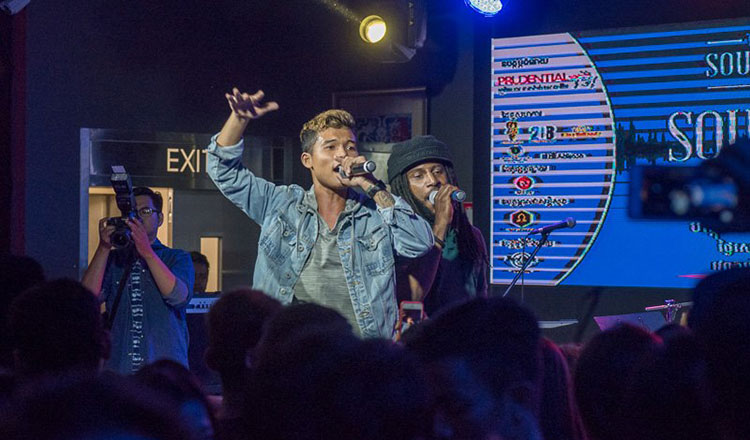 Thanks to The Sound Initiative for providing such.

And thanks to every musician at Saturday’s Soundwave event, who all have raised the bar of the local music industry.

As Laura Mam and Kmeng Khmer climbed up on stage to give their most-awaited performances, everyone was already ecstatic.

Laura Mam sang ‘Knhom Min Sok Chet Te’, one of her most loved dance remakes, and got everyone up on their feet.

And as if the celebration of original music wasn’t enough to end the day right, an unexpected scene transpired on the dance floor – but no, not a salsa or a tango.

In the middle of the singing and dancing mob, Sliten6ix band guitarist, Nara Tsitra, got down on one knee and proposed marriage to his girlfriend, Sophea Hanita. The crowd cheered on as Sophea said yes and put the ring on her finger.

“I felt really excited and nervous because I never thought he would do it in public. He was one of the musicians who performed and it’s just amazing because we really both love music. He did the proposal at the concert, with music and many people, and I am overwhelmed,” Sophea said. The newly engaged couple said the wedding is set next year.

There was so much going on at Hard Rock Café that night – singing, dancing, eating, drinking, talking, laughing and yes, that epic and romantic marriage proposal. But everyone surely felt the fun and bliss of how original Cambodian musical masterpieces – ones that are truly and remarkably ours – can bind people together in one place, in one proud moment.

Hopes for a Cambodia cocoa province