Hopes for a Cambodia cocoa province

At the end of the 19th century, French missionaries made some attempts to start introducing and growing cocoa in Vietnam. But because cocoa didn’t thrive, the agricultural endeavour didn’t reach the borders of Cambodia. But in 2014, Cambodian company Kamkav chose the forested province of Mondulkiri to finally introduce cocoa to the Kingdom for the very first time. The initiative almost failed when a huge drought wreak havoc in Cambodian soil. The plants died. But not the hope and motivation of Kamkav to create Cambodia’s first cocoa plantation. The company started from the beginning, and with perseverance, the Kingdom reaped its first cocoa harvest this year. Struik Stef Lambert, founder of Kamkav Farm, shares his struggles and hopes for cocoa with Eileen McCormick. 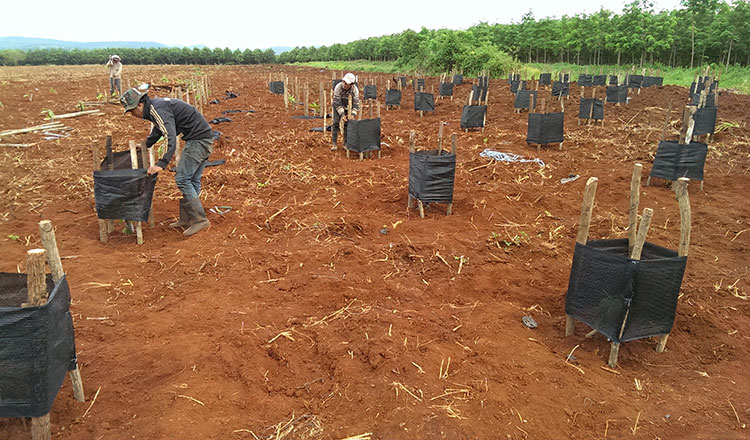 Good Times2: What is the history of cocoa farming in Cambodia or in Southeast Asia in general?

Mr Stef Lambert: For the history of cocoa in Cambodia, it’s impossible to find much or to back it up with information. We did some thorough research but never got confirmation that there was cocoa farming in Cambodia before. In Indochina, meanwhile, there were two initiatives to start growing cocoa but both were in Vietnam – one is by Alexandre Yersin, a disciple of Louis Pasteur, who set it up at the end of the 19th century. He built an agricultural center in Suoi Dau and later in Hon Ba. He successfully introduced rubber trees but the cocoa never took off. Another initiative came from a priest, Father Gernot, in Ben Tre. But also, this adventure stopped after some years. There are no documentations that the cacao in those French colonist times reached Cambodia. In the 1980s, again in Vietnam, Russian and Cuban agriculture specialists tried to introduce cacao again, as invited by the Vietnamese government but the collapse of the USSR stopped the project almost before it started. In 2004 or 2005, Cargill started a cacao training programme, giving free seedlings to 12,000 small-scale farmers in Vietnam. That time, the project was a success. Vietnam did then have 21,000 hectares of cocoa farm.

Good Times2: When did you start cocoa farming? What drew you to running this type of plantation?

Mr Stef Lambert: We started cocoa in Cambodia with the support of Mars Sustainable in Buon Ma Thuot in Vietnam. We bought Forastero (one of the most popular cocoa species) seedlings from them and planted it in Mondulkiri in mid-2014. A serious and horrible drought that plagued the whole of Southeast Asia in 2015 killed all of our seedlings (even the Bu Sra waterfall fell dry for more than a week that time). We started all over again in early 2016. Normally, cocoa takes around three years to fully grow and produce cacao pods (cacao pods contain around 30-60 wet cacao beans), and indeed we have now the first few hundred trees with cocoa pods. We started experimenting last month with fermenting, again with knowledge and support from Vietnam. Our first few hundred kilos of fermented, dried cocoa beans are a fact now. After a failed first attempt, the success of the second try and the quality of cocoa we produced are even much better than what we were hoping for.

Good Times2: How many famers have you been able to train that are now successfully growing cocoa?

Mr Stef Lambert: We already have a group of more than 10 farmers who are interested in starting cocoa but we will wait with the contract farming until early 2019 – when it is time to prepare the land for planting banana, fruit trees and cocoa. That needs to be done in April to June 2019.

Good Times2: Is this project mainly Cambodian-run or are there a lot of foreign partners?

Mr Stef Lambert: Kamkav Farm is actually, at this moment, a Cambodian initiative with support from Holland.

Good Times2: What are some challenges you have faced when you started this new agriculture product?

Mr Stef Lambert: The climate in Cambodia is quite challenging because sometimes it’s too dry, sometimes too wet. But with a good irrigation, it is doable, especially on the very fertile, red soils of Mondulkiri. Cocoa indeed needs shade in the first one to two years. Therefore, we are intercropping it with fast-growing banana trees, and other slow-growing fruit trees like avocados and mangos. This also gives the farmers an opportunity to get extra income from other trees, and it helps in battling fungi diseases and insect attacks in a natural way.

Good Times2: Do you already have buyers?

Mr Stef Lambert: We have plans in 2019 to start with a form of contract farming in which we will contract small-scale farmers – first in Mondulkiri – and provide them with knowledge and technical support to start off with cacao, and guaranteeing to buy the cacao from them against 90 percent of the world cacao price, which they can check themselves online. We will then become a reseller of the cacao to the contacts we are currently building. The most interests we’re getting at this moment come from Central Asia – Uzbekistan and Kazakhstan – and Russia.

Good Times2: What is the process to get your cocoa certified as organic?

Mr Stef Lambert: Organic label requires lab testing and all sort of soil samples. We are currently discussing on getting certified with Singaporean department of the French organisation Ecocert. As stated above, we have found natural ways to handle disease and insects. Hopefully with the support of Singapore, we will get our cocoa officially certified as organic.

Good Times2: What is your hope for the cocoa farming in Cambodia?

Mr Stef Lambert: Our great goal is to make Mondulkiri, and maybe an extension in Rattanakiri, be known as the cocoa province of Cambodia. We will start with small-scale farmers who own one to two hectares of land. Because based on the experience from Vietnam, these farmers – with the right guidance – have much bigger chances to get bigger yield than the large-scale farms. But it also means the development is much slower. If you ask where we will be in the next five years, we expect to see the first 500 or maybe 1,000 hectares of cocoa farm land in Mondulkiri and Ratanakiri.