Prime Minister Hun Sen yesterday reiterated a call for garment workers to support his ruling CPP in the upcoming national election in order to ensure their livelihoods while he also urged authorities to facilitate campaigning for all 20 parties contesting the poll.

Speaking to thousands of workers in Takeo province, Mr Hun Sen said there is only 39 days left before the poll, appealing to authorities to facilitate the campaigns of all parties.

Mr Hun Sen said authorities must make it easy for parties to campaign and install party signs for the public to see.

“We have to know that our party is the ruling party, so we have to think about a free and fair election which can be accepted by all parties,” he said, noting that if all parties are able to campaign freely, the people’s will can be reflected in the vote.

Mr Hun Sen noted that if garment workers support the ruling CPP to continue leading the nation, they will continue receiving employment benefits that the government has rolled out this year.

“In order to ensure employment and income, peace is the first thing we must maintain,” he added, saying that his party can ensure peace and development for the Kingdom so that factories don’t close amid war and chaos.”

“If nieces and nephews make the right decision, it will be easy to keep the situation as it is,” he said. “Revenue will continue rising, so vote for the CPP.”

Mr Hun Sen then reminded the workers that the CPP holds the last position on the ballot, making it easy for voters to remember where to tick their vote. 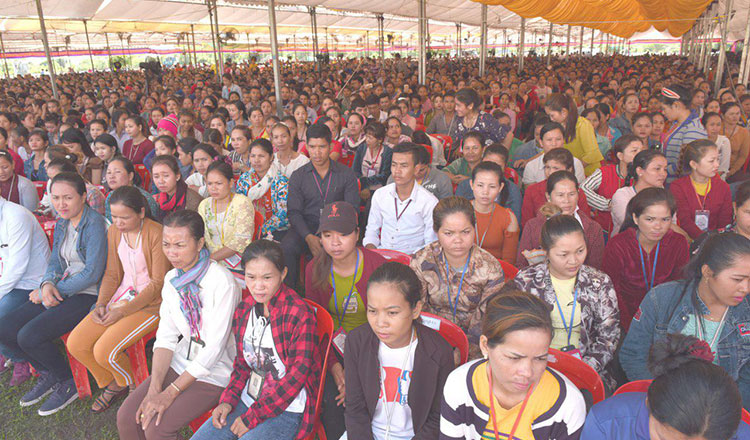 Mr Hun Sen said the 20th spot on the ballot is reflective of his ruling CPP, which ushered in peace for the nation by defeating the Khmer Rouge.

“There are 20 parties joining election, so it means that our party is youngest child, and the youngest child always takes care of the parents,” he said.

Sam Inn, secretary-general of the Grassroots Democratic Party, supported the Prime Minster’s call for authorities to facilitate an easy and free campaign period for all parties.

“So far, we have had some problems in Phnom Penh and some provinces over the installation of party signs,” he said. “However, after his appeal, it is better and we have not received any disturbance from local authorities.”