The body of Prince Norodom Ranariddh’s wife Ouk Phalla was cremated yesterday morning in front of Botum pagoda following a tragic car crash that took her life and left the Prince hospitalised in Thailand.

Ms Phalla’s body was carried from Botum pagoda to the cremation place in front of the pagoda at around 7am in a ceremony that was attended by hundreds of Funcipec officials, her relatives and party supporters.

During the ceremony, Prince Norodom Chakrapong, who attended on behalf of King Norodom Sihamoni, set Ms Phalla’s body aflame at about 9am.

Ms Phalla died hours after a head-on crash that occurred at about 10am on Sunday when a taxi collided with Prince Ranariddh’s vehicle in Preah Sihanouk province, where he was heading with his wife to meet party supporters.

Phann Sothy, a Funcipec lawmaker, said at the ceremony that the loss of Ms Phalla is felt by all of Cambodia.

“Losing Ouk Phalla is losing a Cambodian woman that spent a lot time to study fine arts and joined to serve the nation until she died,” Mr Sothy said. “We regret her death and we are very sad.”

Ms Phalla was born on July 27, 1979 in Phnom Penh and had eight siblings. When she was six-years-old, she began studies at Wat Koh Primary School in Phnom Penh and went on to study at the Royal University of Fine Arts. 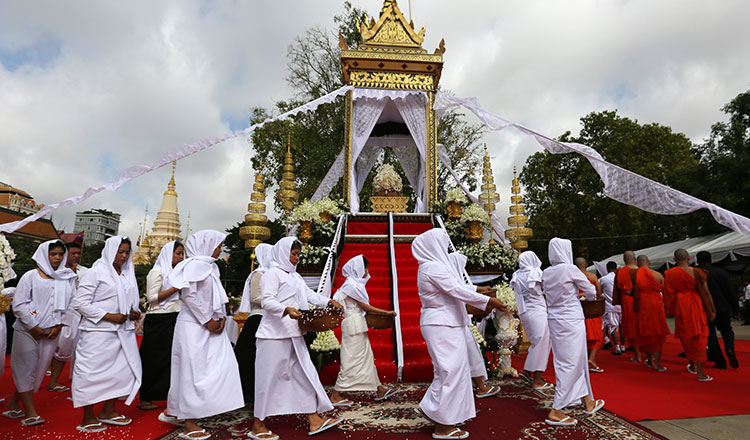 Mr Sothy said due to her wits and hard work, she quickly rose to prominence as an expert Apsara dancer, studying under Princess Norodom Bopha Devi.

“When she was just 13, she was already a very good Apsara dancer,” Mr Sothy said.

In 1993, she became a representative of the traditional dance for the Kingdom and was invited to perform abroad, including in Japan, France, the United States, India, Thailand, Laos and Burma.

In 1999, Ms Phalla began accompanying Prince Ranariddh to carry out humanitarian work. She was due to stand as a lawmaker candidate for Prey Veng province in the upcoming national election on July 29.

Nhep Bunchin, vice president of Funcinpec, said at the ceremony that Prince Chakrapong has asked the King and Queen Mother to help take care of Ms Phalla’s children as Prince Ranariddh continues to recover from a broken jaw, ankle and ribs in Thailand.

“Prince Ranariddh is doing a lot better,” Mr Bunchin said. “But we did not tell him about Ms Phalla’s death and cremation yet because we want him to have a strong mind while he recovers.”

“We are so worried about when he gets better and returns to Phnom Penh and we have to tell him though,” he added. “We are thinking and thinking how and when to tell him.”

Mr Bunchin noted that Prince Ranariddh has asked for a phone to call his wife, but those taking care of him in Bangkok have told him that she is hospitalised and unable to speak.

Mr Bunchin said the party has not sent a formal request to the Interior Ministry yet to have the accident thoroughly investigated, but has made public comments that it seems odd that the Prince was involved in a third accident in the past few years, especially since he was part of a long convoy on Sunday.

“I urge the ministry to investigate this case thoroughly,” said Mr Bunchin.

Mr Saret, who also suffered injuries requiring hospitalisation, has since been charged with careless driving causing injury and death. He has been jailed at Preah Sihanouk provincial prison, where his medical treatment is continuing.