Interior Minister Sar Kheng yesterday urged authorities at all levels to continue cooperating with anti-counterfeit goods officers at an event at which more than 100 tonnes of low quality products and products mixed with chemicals were destroyed.

Mr Kheng said during the Kampong Speu province event that the ministry’s counter counterfeit committee had given priority to cracking down on counterfeit and tainted products such as medicines and foods.

“These products are expired or mixed with chemical substances that are harmful to health,” he said. “Another thing is that they were manufactured illegally, so we have to crack down.” 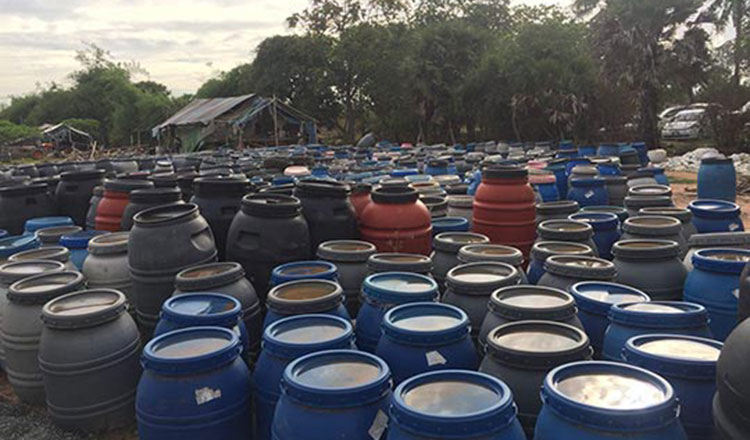 “This problem has affected people’s health, and as I know, these products are not merely sold on the Cambodian market, but also exported,” he added. “Wherever these products go they will cause health problems.”

Mr Kheng urged all officers and police at all levels to continue collaborating with the committee to prevent the sale of counterfeit and tainted products.

He also urged farmers to avoid using chemicals on crops and livestock, which impacts the health of consumers.

Meach Sophana, head of the counter counterfeit committee, said the 116 tonnes destroyed yesterday were of 16 kinds.

These mostly included sausage casings, pig and goat intestines, chicken giblets and some chemicals. They were the subject of a crackdown in November 2017 at an illegal facility producing sausage casings in Kampong Speu province. The owner, Ving Huy, 38, escaped.

Mr Sophana said more than 160 tonnes of counterfeit cosmetics had been destroyed previously. Mam Nam, a worker at the illegal facility, said the animal intestines used by the facility owner to produce the sausage casings were imported from China.

The owner asked the workers to soak the intestines in a basin and mix them with acid, white flour and slippery liquid. The intestines were dried before the sausage was added into the finished product in Phnom Penh.

“In the past, I just thought about working without realising it was affecting my health,” Ms Nam said. “I found out about the risks when the authorities came to crackdown.”

“When I was processing sausage casings it affected my health, but I just kept working when my hands were numb,” she added.

According to a report by the committee, authorities cracked down on 19 cases of counterfeit good production totalling almost 600 tonnes and arrested six suspects last year.

US advocates for release of two RFA reporters