Gilmore Girls, which ran from 2000 to 2007, was a good show, but because creator Amy Sherman-Palladino left before the seventh and final season due to a contractual dispute, the show never got the ending so many fans hoped for. And no one did ever expect that Netflix would give the show a revival that could hopefully give fans and critics some closure. So let me give you reviews on both the original series and the revival, Gilmore Girls: A Year in the Life.

The original series followed Lorelai, a 32-year-old mom of a 16-year-old bookworm. What made this show a cult classic for teenage girls and maybe some boys everywhere were the rapid-fire dialogue that often had pretty solid jokes, and the drama at the heart of their unconventional relationship makes for some pretty heartfelt moments between the family and quirky town characters as they mature throughout the series.

The mother and daughter’s unconventional relationship focused on Lorelai and Rory’s mutual love for good pop-culture and their powerful addiction to caffeine. They also have a knack of loving their small town while making continuous fun of it at the same time.

Lorelai left home when she was pregnant with Rory at 16. Lorelai parents’ are self-righteous and rich, forcing Lorelai to abandon them and live her own life as a teenage mom. She worked in a hotel after giving birth to sustain her and her baby’s needs.

Rory is now 16 and is pursing her academic goals of getting into Harvard. In order to help her daughter achieve her goal, Lorelai reconnected with her rich parents to ask for assistance on Rory’s private school tuition. But the help comes with strings. She resents her parents for not acknowledging the success she has reached after getting pregnant at a very young age. Her parents, meanwhile, were a mix of “I don’t care about you” and “I want you back in our life”. This causes tension throughout the show.

Other significant circumstances on the original series do not dwell so much on individual relationships, but on the traditional coming-of-age challenges faced by the leads. And this is not solely focused on Rory as the teenager, but on her mother and other characters’ realisations and changing perspectives.

But more than the overly dramatic storylines on exes’ seeing each other, the main characters’ journeys towards the attainment of their personal goals made Gilmore Girls watchable for several seasons. Sadly, however, it just never got the ending a long-running and well-loved show deserves.

But with Netflix’s revival of Gilmore Girls, will fans’ expectations be met?

The revival does not give out one-hour episodes. It instead gives ‘seasonal’ episodes, spanning from Winter, Spring, Summer to Fall, and follows the lives of the Gilmores for three months at a time. In what is an extremely rare case for television revivals, all original leading actors have returned to play their roles, ensuring that fans can experience Stars Hollow in all its nostalgic glory for one last time.

Rory is 32, the age that Lorelai was when the original series began. The only thing to keep in mind is that there has been a good 9-10 years since the show ended so there is no way for the show to pick up exactly where it left off but it still does a pretty good job. In the first episode, “Winter,” we learn that Rory is returning home to Stars Hollow after an extended reporting trip. Rory works as a freelance journalist for The New Yorker, and has a piece being considered by The Atlantic.

What makes Rory still very relatable, despite or probably due to her growing age, is her being lost like most millennials are. It’s just that, many viewers equate her personality with being an over-achiever. Something about her being in a subpar relationship and no real fame for her writing seem a bit disappointing. Many critics also feel her mother, Lorelai, has less fire as she did before.

For me, there is enough witty exchanges that exist between the leads, and I just don’t think someone in their 50s can be quite as snarky as a single mom in her 30s. I think the writers did what they could, considering the gap of time. 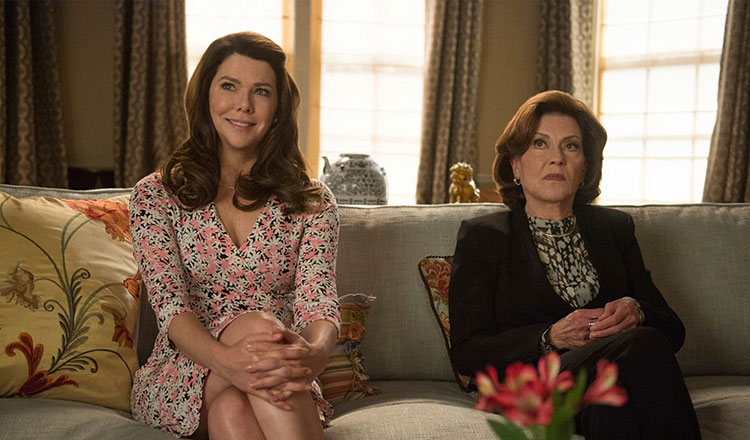 Lorelai has finally committed to Luke, the coffee shop owner who she always missed because of wrong timing. While the two have been together for the past nine years, they never got married or had more children. At first, things seem good between the two until Lorelai starts having a mid-life crisis, leading her to think she needs to do an “into the wild” trek into the Pacific Crest Trail.

All the three Gilmore girls are dealing with the death of Richard, the family patriarch, and how this loss has changed the dynamic of the whole family. This change make for a nice shift from Emily Gilmore (Kelly Bishop), the grandmother and Daughter of the Revolution (D.A.R) queen.

Enveloped with grief, Emily realises she doesn’t want to keep quiet and play by the country club society’s rules anymore. In the past, Emily would easily fire house helps for simple things. But after her husband’s passing, she sees her cleaner’s family moving into her home, speaking a language she doesn’t understand. Somehow, this serves as a beautiful metaphor. Emily, who had a hard time listening and understanding others, suddenly has someone who understands her perfectly despite the fact that they don’t have any verbal communication at all.

The revival’s ‘four seasons of change’ episodes, all running more than 80 minutes each, let us see how these Gilmore girls come to terms with how their lives have turned to be – frustrations, shortcomings, career successes, relationships and everything.

So this weekend, pretend you’re 13 again and invite your BFFs over for some pizza while you binge watch this chick flick. It feels both nostalgic and fresh – a combo you wouldn’t want to miss seeing.