As civil war raged across the country in the 1970s after Prince Norodom Sihanouk was deposed, Sok Touch, who was then a five-year-old boy, ran aimlessly with his father into the jungle.

Mr Touch, who now heads the Royal Academy of Cambodia, says he eventually became a child soldier under the brutal Khmer Rouge.

“I was asked to carry weapons. I was a victim as other boys were under that regime,” says Mr Touch, who took the lead role at the academy, which falls under the jurisdiction of the Council of Ministers, in July 2017.

Born in 1965, Mr Touch says he only realised that he was serving the Khmer Rouge movement led by Pol Pot from early 1979 to 1982 when he became a teenager.

Mr Touch says that he does not care who writes history books on the Khmer Rouge, whether a foreigner or a Cambodian, but he cares who records the facts accurately.

“I don’t have a problem with foreign authors writing books about the Khmer Rouge history. If we write it, there is not much difference,” he says. “It is not important who writes our history; the most important thing is who writes it accurately.”

Mr Touch returned to Cambodia in 1999 from Russia where he was studying since 1989 following a scholarship.

In July 2015, Mr Touch was tasked by the government with inspecting the accuracy of border posts separating Vietnam and Cambodia as the head of a nine-member team from the RAC.

He was a former director of Khemarak University in Phnom Penh and a scholar at the RAC and led its International Relations Institute for years.

Mr Touch also spent two years conducting research along the borders with Vietnam, Thailand and Laos between 2015 and 2017.

He says he faced a lot of challenges while researching border issues.

“When I was working as a researcher along the borders, I promised my mother that I would never provoke problems regarding border issues and that I would write the truth based on research and science,” he says.

“Please remember that the Cambodia-Vietnam border has been only an administrative border,” he adds. “There have been no clear border markers when compared with the Cambodian-Thai border.”

Turning back to the Khmer Rouge era, Mr Touch says he is a defender of January 7, 1979, when Vietnamese troops entered Cambodia and aided its liberation from the regime, a move some still see as an invasion.

“The message is clear,” he says. “If there was no presence of Vietnamese troops, probably all Cambodians would have been killed by the Khmer Rouge.” 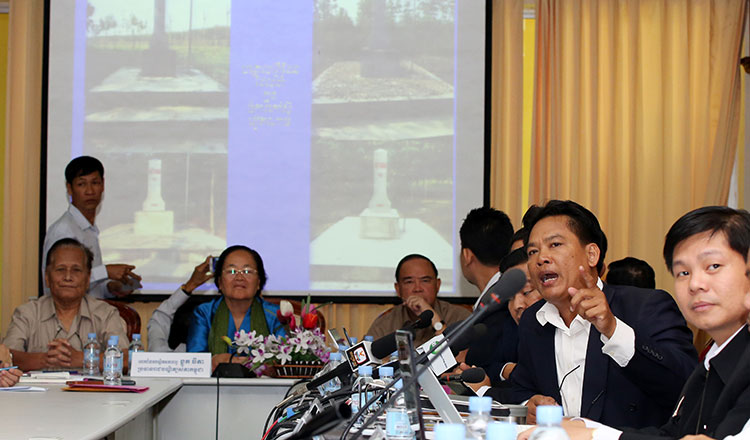 “As an academic, my clear message is that when the Vietnamese entered Cambodia in 1979, they came to rescue Cambodians from the Khmer Rouge regime. If there was no Vietnamese intervention, all of us may have been killed.”

Despite his graduation as a political history scholar in Russia, Mr Touch says he has no intention to become a politician.

“I don’t wish to be a politician because I want this academy to keep growing, so I am delighted to help,” he says. “I can help politicians, but I don’t want to become a politician.”

Mr Touch, who is well known for weighing in on national and world politics, says he does not believe that North and South Korea will ever unite.

“On the other hand, South Korea is the US’s ally while North Korea is China’s ally. The US wants to have influence over the Korean Peninsula. If both countries become one, the US’ army base will not be allowed to stay. And China also needs North Korea,” he adds. “So, I believe North Korea is just playing diplomacy in order to get economic sanctions removed.”

With China in mind, Mr Touch says that he is pleased with the country, Cambodia’s biggest donor, invests millions of dollars in the Kingdom without interfering with the nation’s internal affairs.

“Cambodia is a sovereign state,” he says. “Cambodia welcomes any countries in the world that wish to invest in Cambodia. China has given a lot of opportunities to Cambodia. China aid comes without conditions, but US aid has conditions.”