Prime Minister Hun Sen yesterday urged the public to vote for his ruling CPP candidates in the upcoming national election in order to ensure peace and development for the country, prompting accusations that he was campaigning prior to the official campaign period.

Speaking at an inauguration ceremony for National Road 6, Mr Hun Sen said that a vote for his ruling CPP was a vote for peace and the guarantee that the country would not again fall into war.

“If you want to maintain peace and the development that is already growing, please vote for the Cambodian People’s Party,” Mr Hun Sen said. “We will win on the point that our country is not going to fall into the hands of rebels with us in power.”

Mam Sonando, president of the Beehive Social Democratic Party, said the election campaign period does not officially begin until July 7, but the ruling CPP has so much power that it can do as it pleases.

“The implementation of laws is a challenge that we have faced for a long time,” he said, suggesting that Mr Hun Sen’s remarks were akin to campaigning and therefore against the law. 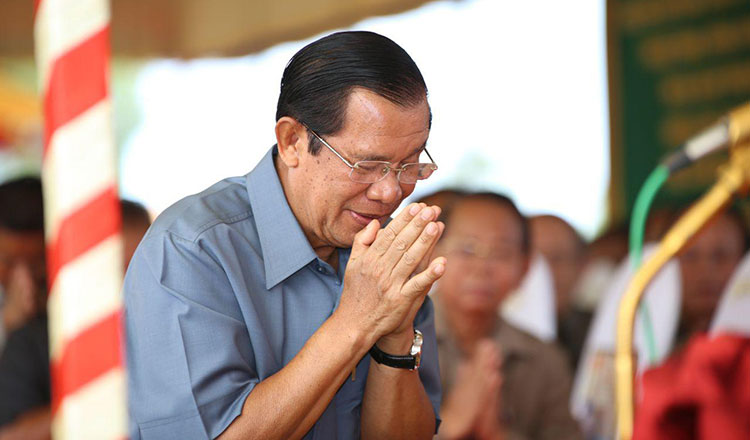 “People with power, if they don’t take the chance to use that power, then maybe they will lose it,” he added.

Hang Vitou, a political analyst, said Mr Hun Sen’s remarks could not be considered campaigning because they were made during a ceremony speech, not a campaign event.

“It is not election campaigning unless they are holding public campaign events,” he said. “If they are on the streets holding megaphones and holding rallies, that’s different; that’s campaigning.”

Mr Vitou added that it is up to the people to decide who to cast their votes for, noting that the ruling CPP seems to only have one strategy to attract voters: threatening a return to war.

“I think the CPP should seek new strategies, including reforms for civil servants at the grassroots level and eliminating corruption,” he said. “Addressing social injustices will gain the CPP more voters.”

“We have to monitor any accusations of campaigning,” he said. “If they manage to cause public disorder, we can consider that it is election campaigning.”

“If they use a public location without permission from local authorities it is illegal,” he added.

Sok Eysan spokesman for the CPP, said that making a general appeal during a speech cannot be considered campaigning.

“All political parties have the right to do political activities like the CPP and it is not against the law because it was just an appeal to the people,” he said.

NEC asks businesses to help workers get to polls