The revelation came while Mr Hun Sen and Chinese Ambassador to Cambodia Xiong Bo presided over an inauguration ceremony for National Road 6 in Kampong Thom province.

During a speech at the ceremony, Mr Hun Sen said that the government dispatched Son Sen’s brother-in-law, who Mr Hun Sen identified as Chhorn, to be stationed in Kampong Thom province as a spy in a bid to infiltrate Oddar Meanchey province’s Anlong Veng, the last stronghold of the Khmer Rouge.

Mr Hun Sen said that this led to Pol Pot suspecting that his long-time commander Son Sen was betraying him.

“We sent a brother-in-law of Son Sen to be stationed in Prasat Balaing district as a base to reach the Anlong Veng area,” Mr Hun Sen said. “His name was Mr Chhorn. He was a key man in getting into Anlong Veng and fomented suspicion that led Pol Pot to kill Son Sen and his whole family.”

Anlong Veng was the last Khmer Rouge stronghold that fell to the government in 1998.

On June 10, 1997, Pol Pot ordered the execution of Son Sen and his family for planning to negotiate with the government.

Several days later, Khmer Rouge commander Ta Mok ordered Pol Pot to be arrested and put him on a trial to distance the movement from its leader.

Mr Hun Sen added yesterday that criminal were killing criminals within the Khmer Rouge during its demise.

“This was a case of a criminal killing a criminal,” he said. “But Pol Pot’s killing [of Son Sen] was organised from the high to low level.”

“His speech is a true history,” Mr Chhang said. “He is a witness clarifying history.” 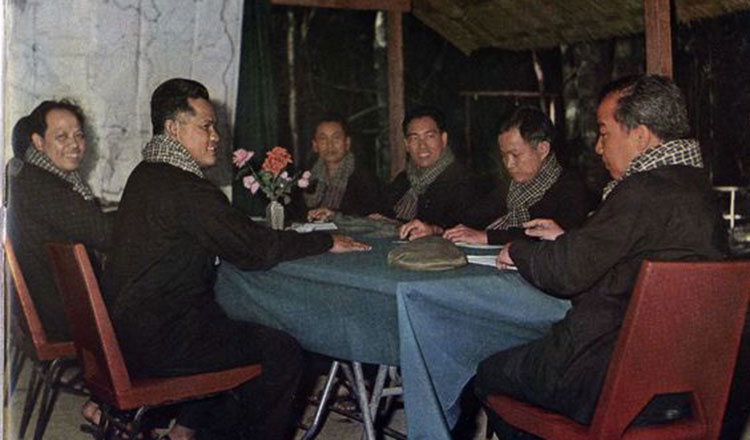 Mr Hun Sen added that the war between the government and Khmer Rouge troops in Kampong Thom province in the 1990s came to an end simultaneously with battles in Siem Reap and Oddar Meanchey provinces.

Mr Hun Sen then urged all people to maintain peace to ensure continued development of the Kingdom and to prevent the return of the Khmer Rouge. Pol Pot was the leader of the Cambodian communist movement that ruled the country from 1975-1979, when an estimated 1.7 million Cambodians died of forced labour, disease, starvation and execution.

Son Sen’s cremation site has become one of 14 historical sites in Anlong Veng district, according to DC-Cam.

The party protecting the Kingdom’s forests