The party protecting the Kingdom’s forests

The Cambodia Indigenous People’s Democracy Party vows to defend rights of minorities and protect their lands.

Plang Sin, president of the Cambodia Indigenous People’s Democracy Party, fears that only his party can protect indigenous people’s rights and the forests that they hold sacred.

Sitting in a guesthouse prior to filing his election paperwork with the National Election Committee in Phnom Penh, Mr Sin says he created the party because indigenous people have always faced hardship in the country.

“We want to find a way to help indigenous people,” says Mr Sin, who is part of the Bunong indigenous minority. “We want to practice politics that focus on protecting the people and their forest, culture and land.”

Mr Sin, a farmer in Mondolkiri province who grows cassava and cashews, says his party’s name reflects its main focus, noting that it does not mean that non-indigenous people are to be excluded from the party or its policies.

“My party’s policies are related to culture, land and forestry because when people lose their lands and forests, they lose their culture, their identities, and we must maintain our culture because when we have a culture, we have reputations,” he says.

Mr Sin says that he and 19 others, including people from the Kuoy, Por and Prao indigenous minorities, formed the party together with the help of some local NGOs who aided them with developing a focus for the party.

Mr Sin says the founders chose the elephant as its party logo because it is the strongest animal in their forests.

“The Cambodia Indigenous People’s Democracy Party’s logo has a white moon and an elephant, which is the strongest animal and polite,” he says. “The elephant is the most important animal in our forests.”

Mr Sin says that before he created the party, he thought only rich tycoons could afford to start political parties. However, after some research, he learned that even poor villagers could unite and create a party.

“My party used donations from our members to start the party,” he says, adding that his meagre income is shared between his family and the party. “We do not have anyone helping us.”

For the upcoming national election in July, Mr Sin’s party is fielding candidates in only 11 locations, including ten provinces and the capital.

“We can only field candidates in 11 places because we do not have enough human resources,” he says. “My party is the poorest among all the parties.”

“It is the first time that the Cambodia Indigenous People’s Democracy Party is competing in a national election,” he adds, noting that his party’s first election battle was last year’s commune elections.

Mr Sin’s party failed to win any seats in the 2017 commune elections, but came in third behind the ruling CPP and then-opposition CNRP in Mondolkiri province, where the party has its headquarters and was created.

Mr Sin says that he is eager to join the national poll and show the world that Cambodia is a democracy, not a dictatorship as some critics argue.

He believes the election on July 29 will be free, fair and balanced, not a sham as some international organisations have claimed.

“Nowadays, they criticise us,” he says. “People say that Cambodia is a dictatorship, but how can that be true when the Cambodia Indigenous People’s Democracy Party is joining the election? We want to join to show that it is not true.” 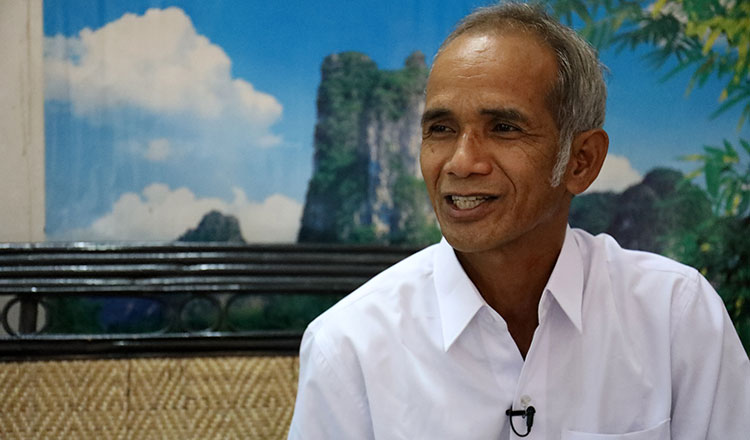 Mr Sin says most of his candidates for the election hail from indigenous minorities, but notes that his party does not discriminate and would have fielding candidates from the Khmer majority if they had shown interest in joining his party.

He says that unfortunately some Khmers look down on his party, but he does not let it rub him the wrong way.

“Even though they look down on us, our Cambodia Indigenous People’s Democracy Party does not discriminate against any people,” he says.

“My party hopes that we can earn even just one percent of the vote,” he says. “Most importantly, we hope that we can win Mondolkiri province; even if we just win that one seat, that’s fine.”

“Only the Cambodia Indigenous People’s Democracy Party can protect the forests because we live in those areas, including the Prey Long area,” Mr Sin adds.