Nhek Bun Chhay has been re-elected president of the Khmer National United Party and addressed drug production charges hanging over him, denying any involvement in the old 2007 case.

Mr Bun Chhay’s denial of the drug charges came on Saturday after his re-election and after he kept mum for more than a month following his release from jail on bail.

Mr Bun Chhay was jailed in August over a 2007 drug production case in Kampong Speu province after his former personal adviser, Chea Chung, who had been convicted earlier over the 2007 case, fingered him as the ringleader.

Speaking to reporters at his party headquarters in Chroy Changva district, Mr Bun Chhay said that he was innocent.

“Before my arrest, why didn’t I flee or go hide somewhere? It is because I am not involved in what I was accused of,” Mr Bun Chhay said. “I know myself. That is why I am staying here to challenge the law and court.”

“I asked the court to thoroughly investigate the case and give me justice,” he added. “Until now, it has been eight or nine months and the court has produced no evidence to implicate me over the drug case.”

Court officials could not be reached for comment yesterday.

After having his presidency approved on Saturday, Mr Bun Chhay vowed to lead the party he founded to secure seats in parliament during the July 29 national election. 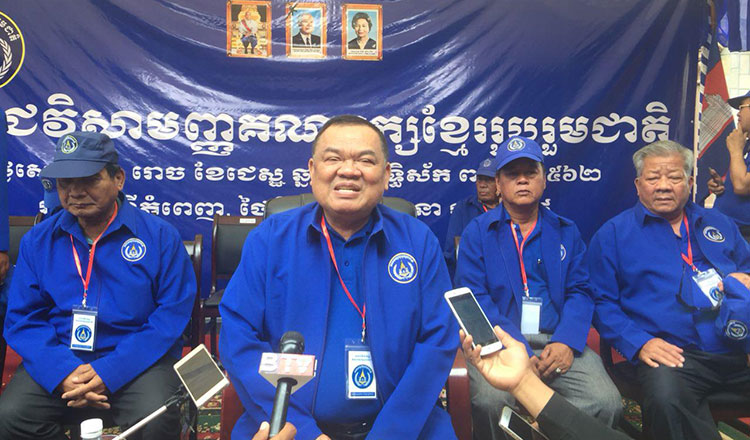 He added that he planned to visit party members and activists in Phnom Penh and the most populous provinces, including Prey Veng, Tboung Khmum, Kampong Cham, Siem Reap, Battambang and Banteay Meanchy.

“We have already discussed it and we will go to the provinces, especially those with many seats,” Mr Bun Chhay said.

The KNUP drew the number one ballot spot among 20 political parties contesting the election.

Mr Bun Chhay was deputy commander-in-chief of the country’s military when Funcinpec shared power with the CPP during the 1990s.

In 2016, he left Funcinpec to launch the KNUP, which became the only party outside of the CPP and CNRP to win a commune chief post in the June 2017 commune elections.

However, after the commune elections he was stripped of his role as a government adviser following rumours he worked with the opposition CNRP.

More than ten KNUP party officials were also removed from their positions within the government.