The announcement came as Phnom Penh Governor Khuong Sreng and Prime Minister Hun Sen and his wife visited the community to distribute provisions to residents.

Mr Meas Pheakday added that the newly-built houses are located in Prek Pnov district’s Andoung village, available to any resident who agreed to be relocated.

“They do not have land to live on, they live in the cemeteries,” he said. “Relatives of the dead were not satisfied with their living arrangement because it was difficult for them to organise religious ceremonies.”

He added that the new homes are being offered without any coercion or notice of eviction. He said that if residents refuse to vacate the area, they can live in the same place as they always have.

“For the new houses in Andoung village, we already have enough infrastructure and nearby factories so people who are willing to leave can work and do business there,” Mr Meas Pheakday said. “And if they live there for five years, then City Hall will give them a land title.”

An unnamed Smor San community resident said that she and some other residents have not decided to move to the new village, saying that they requested on-site development rather than relocation.

“Our houses were near the river, but some collapsed when the river bank collapsed. It took us many days before deciding to live in the cemeteries,” she said. “At first it was hard, but we have adapted to it now and we want to stay here.” 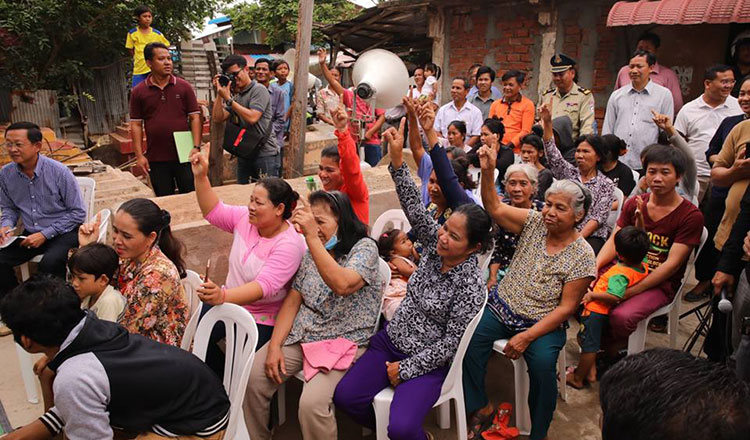 Mr Sreng responded to the residents by saying that the authorities could not develop on-site because cemeteries have multiple owners.

“I don’t oppose on-site development and Prime Minister Hun Sen doesn’t oppose it, but we don’t have the land for it. They live in the cemeteries, so how can we develop the site,” Mr Sreng said. “You can go to the new location or you can stay – there’s no coercion.”

According to Chbar Ampov district governor Cheng Monyra, the Smor San community was created in May 2014, but the community is not officially recognised.

He said during the 1990s, some houses next to the Bassac river bank collapsed, making residents lose their homes and settle at nearby cemeteries. He noted that about 112 families live there now, an equivalent of 90 houses.