It is a noisy morning at the Royal Railway Station in Phnom Penh, and the air is filled with the sounds of heavy traffic and strident honking from the surrounding streets. As passengers get off the train they have boarded in the airport, a group of tuk-tuk drivers waits in a corner of the station looking for their next customer.

“It is not easy to get clients at this station. There are still not many people using this train,” a motodop driver, who is hanging around with the group of tuk-tuk drivers, says.

It is no surprise that the number of passengers is still small: the shuttle service, connecting the central railway station to Phnom Penh International Airport, was only launched in April.

The line stretches for nine kilometres and allows people to travel back and forth from the city centre to the airport. It is managed by Royal Railway, the company responsible for the country’s railway network.

In stark contrast to the cacophony of noises outside, a dozen passengers sits quietly in the waiting hall, ready to board the next incoming train. Some are just here out of mere curiosity, intrigued about what it feels like to ride a train.

While the café, the only one in the station, has only a few customers drinking iced drinks out of straws, the ticket counters are deserted. Tickets are, indeed, not needed to board the train: the service has been free for all passengers since its inauguration, and will remain this way until the end of July, according to representatives of the Ministry of Transport.

Near the coffee shop, a few youngsters huddle around one of the modern-looking self-service ticket kiosks, playing around with its digital screen while murmuring in low voices.

According to railway officers, the first train leaves the central railway station at 5:30am every morning, with trains running every 30 minutes until 3am the next morning, when the last one departs.

“There is not many passengers in each train. Only at around 5pm do trains get busy,” a railway officer says. 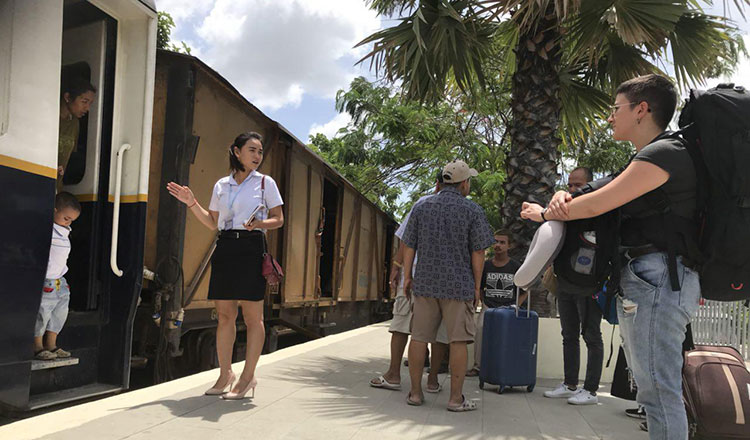 Lina, a young woman waiting for the next train with her 5-year-old son, says she has been dying to try the shuttle service ever since it was announced that it will be free-of-charge.

“I’ve never been on a train before. I’m happy that I can take my son along to experience it,” she says before getting on the train.

The shuttle service takes 45 minutes one way. A person travelling by motorcycle or car could cover the same route in less than 20 minutes, although, in rush-hour traffic, the journey would take at least an hour.

Sun Chanthol, the Minister of Public Works and Transportation, said during the service’s launching ceremony in April that the new shuttle was created to reduce the capital’s worsening traffic problems by increasing the range of transport options available to commuters.

“This new train service will alleviate traffic congestion and help the people of Phnom Penh move around the city more conveniently,” the minister said.

Enjoying the view out of the wide window as the train crosses the city, Phnom Penh resident Soeun says he was glad when the ministry announced the launch of a new train connecting the city centre and the airport.

“I came today to experience the train with some family and friends,” he said. “It’s free of charge, so I really wanted to try it,” the 60-year-old man says.

The train goes slow enough to allow passengers to see clearly outside their windows. Curious children playing near the rails stare back at them, while their parents, not that interested in the noisy machine, carry on with their daily routines.

Already in the airport, passengers sit in an air-conditioned waiting hall. They will be the next ones boarding the train, as it heads back to the city centre.

“There are many more users going from the city to the airport than the other way around,” explains an offer at the information desk in the airport.

The service will be revamped in August, when three new more trains, imported from Mexico, will be added to the line, according to Royal Railways.

For the tuk-tuk drivers parked outside the central station, this is good news. They hope business will pick up in August, when more trains, carrying more people, will be in service.

“For now, we just have to wait. Business is not great, but it will improve in a few months,” the motodop driver tells his friends in the railway station.