More than 100 lawmakers passed the draft law with 33 articles which will benefit workers and the nation as a whole as it intends to promote a decent living, create job opportunities, increase worker productivity and push for increased investment opportunities.

Pen Panha, a CPP lawmaker, said that the minimum wage was set based on decent living standards and the country’s economic conditions.

Labour Minister Ith Samheng said during the session that the government has always paid attention to garment workers, noting the minimum wage rose from $40 in 1997 to $170 per month in 2018.

“Strengthening mechanisms to increase the minimum wage is really important and it responds to the economic situation,” Mr Samheng said. “We have increased the minimum wage and provided other benefits to garment workers 14 times.” 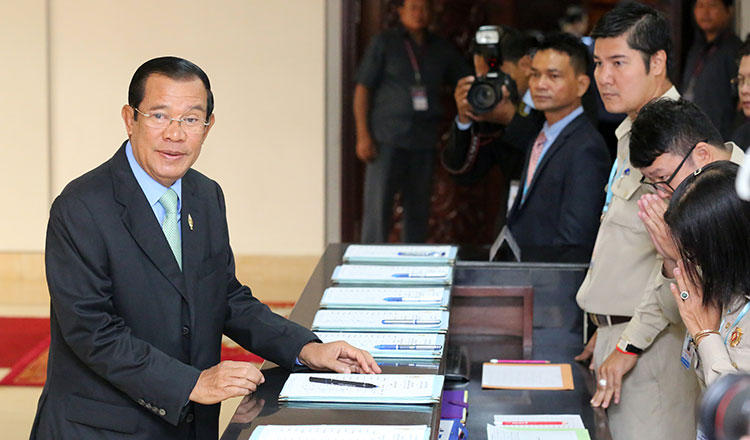 Mr Samheng said that the draft law took more than two years to be finalised.

The Council of Ministers approved it on May 25, while the National Assembly’s legislation committee discussed it on May 31.

Sam Vuthy, a Funcinpec lawmaker, said that because of the law, garment workers will be paid better.

Mr Vuthy added that the government should have more factories built in the provinces to prevent farmers from migrating to neighbouring countries to seek jobs.

“If we move factories to rural areas, it will stop people from leaving their home villages and they will work in the factories near their homes,” Mr Vuthy said.

“For the problem of fainting and traffic accidents, we have mechanisms to solve it,” Mr Samheng said.

Man Seng Hak, vice president of Free Trade Union of Kingdom of Cambodia, said that the law should be well-enforced so that workers could benefit.

Kaing Monika, deputy secretary-general of the Garment Manufacturers Association in Cambodia, hailed the adoption of the draft law, saying that it was a key to negotiate wage raises.

“We welcome the law. The law serves as a good foundation for the wage negotiation process by setting clear mechanisms and criteria to be used to determine the appropriate level of minimum wage raises,” Mr Monika said.

He added that the law should have covered informal workers so that they could benefit as well.

“The law should not be limited to just the garment and shoes sectors, but to the private sector in general,” he said. “With the law, concerned parties are obliged to strictly adhere to the mechanisms and criteria, leading to results acceptable to all parties.”