The ministry said on Wednesday that a 30-capsule bottle of Ceng Fui Yen produced by WELIP (M) SHD BHD, Malaysia, had been analysed.

It was found to contain cyproheptadine hydrochloride and dexamethasone. These products mean that the traditional medicine is considered to be counterfeit in accordance with the Law on Drug Management.

The ministry said the products had been imported without a clear source and distributed to pharmacies and traditional medicine stores across the capital and provinces.

The ministry called on all relevant officials and authorities to collect these medicines for immediate destruction.

The ministry also warned of action under the Law on Drug Management against pharmacies and traditional medicine stores that do not hand in this medicine or continue to import, distribute and sell it. 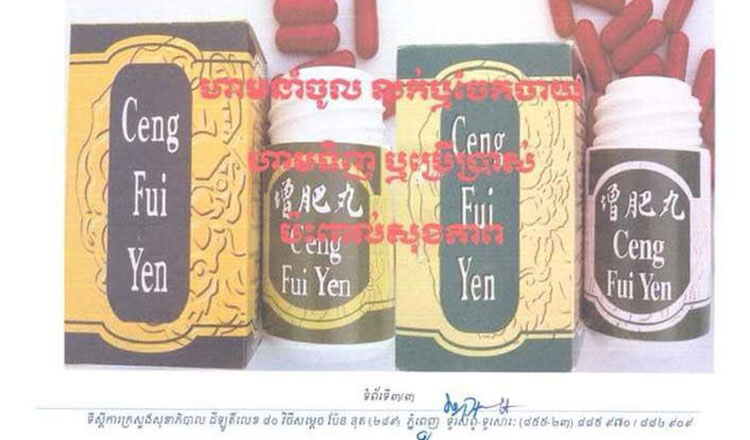 Hean Kimseat deputy director of the regulatory office of the ministry’s drugs, food, medical equipment and cosmetics department, said yesterday that four or five types of this counterfeit traditional medicine were used to treat joint pain.

“This medicine can affect the stomach,” he said. “The more you consume, the worse your stomach inflammation gets, so those with a stomach problem are not allowed to use it.”

“This medicine does not provide such information to consumers,” he noted.

Mr Kimseat did not know when the medicine had started to be imported to Cambodia because the importation was illegal and the source was unclear.

He said the ministry was assigning officers in the capital and provinces to inspect and collect these counterfeit medicines for destruction.

One killed, eight injured in explosion