The Kampot Playboys’ debut album ‘Garuda’ is a fusion of Khmer traditional, rock and Celtic sounds for the creation of happy danceable tunes. Peter Olszewski, in Siem Reap, spoke to the Playboys before they flew off to Singapore on their first international tour, and Sonny Inbaraj Krishnan caught them, on their return, at the album launch party in Duplex, Phnom Penh.

Oh what a Saturday night! Never has Street 278, in Phnom Penh, seen such a huge crowd jam into Duplex to party at the launch of an album by a Cambodian band. The much talked about debut album ‘Garuda’ by the Kampot Playboys, that took almost a year to complete – recorded and engineered in the Siem Reap-based 60 Roads Studio – was finally released.

What really blew the minds of the audience was the fusion of Khmer traditional, rock and Celtic sounds for the creation of happy danceable tunes, allowing one to soak in the vibes, let their hair down and just have a good time without a care in the world. And never have I heard in Cambodia, the tro Khmer – a traditional bowed string instrument – made the lead instrument in a rock band. Are we witnessing the birth of a new genre in music ethnography?

The album ‘Garuda’ reminds me of Carabao’s album ‘Made in Thailand’ released in the late 1980s. The Thai folk-rock band had their fans dumbfounded when they combined electric guitar and bass, drum kit, keyboard, and accordion with Thai musical instruments like the khui (a Thai flute), saw-u (a bowed stringed instrument), and sueng or pin (a plucked stringed instrument). The lead instrument in ‘Made in Thailand’ was the khui, and the album, a blend of country rock and Thai folk songs from Suphanburi province, sold over three million copies, giving rise to a new genre called ‘new wave’ pleng puea chiwit (songs for life).

Now, what’s the Kampot Playboys’ take on this this?

“We always get questions like these. We get called fusion. So what are we? Khmer rock? Khmer folk rock with a twist of lemon?” asks Mark Chattaway, the band’s co-founder.

“Not to be argumentative, but why do we need to classify the music?”

Other than Mark Chattaway on bass, the rest of the Kampot Playboys are Uk Sochiet (the band’s other founder), lead vocals and guitar, Vy Nget, on the tro Khmer, Kev Selby on accordion and Lee Chapman on drums.

In Duplex, the Kampot Playboys opened with the instrumental ‘Riverflow’. The second number ‘Ride the Elephant’ had the crowd rushing in front to boogie on the dance floor. Everyone then goes crazy with ‘Maksy’ with Sochiet encouraging the audience to dance the retro rom Madizone. The party begins with Mark Chattaway dedicating ‘Black Coffee’ (Café Khmau) to the much-loved Steve Porte – photographer, adviser and best buddy to almost all the muscos in town.

In ‘Row the Boat’ and ‘Youth’, Vy Nget’s tro Khmer and Kev Selby’s accordion are in perfect union in call and response encounters giving that special feel of a new traditional Khmer-Celtic and rock sound all fused into one, and why the Kampot Playboys should be taken seriously as the handmaidens to a new genre in Khmer folk rock.

“Garuda is the King of Birds and it was a joking nickname I called Sochiet. And he mentioned years ago (2012) we should record an album called ‘Garuda: King of the Birds’.

“This got shortened to just Garuda. I have a personal interest in the Mahabharata, Ramayana and the Reamker and I love the imagery of Garuda. Everywhere you go in the country there is Garuda. There are also some personal reasons too that I’ll keep private.” 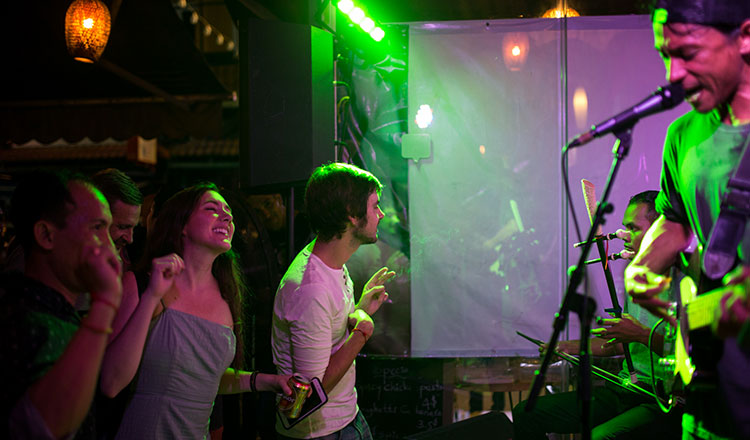 There are 11 tracks in ‘Garuda’ and one acoustic track ‘Arapiya’ with Vy Nget on tro Khmer and Sochiet on guitar. A special guest in the studio was Conrad Kelly, one of the founders of And You Will Know Us By the Trail of Dead, who also played guitar in the album.

“The tracks are a mixture of songs we have been playing live over the last few years. There are songs from our favourite singers like Vor Sarun and Yol Aularong from the late 1960’s and early 70’s and some older Khmer songs plus two original songs that were written a few years ago. All the songs are sung in Khmer,” Mark Chattaway points out.

Cambodia, indeed, is making its mark in the international music scene with 2018 seeing well-recorded and well-engineered works from home-grown studios. The year started off with the release of Scott Bywater’s ‘Shore to Shore’ recorded in the Phnom Penh-based Links Studio. Last month, local hip-hop band Hypnotic Fist Technique released their debut ‘Golden Age: The Sequel’ also recorded in Links. Now we have Kampot Playboys’ ‘Garuda’ recorded and engineered in 60 Roads Studios, in Siem Reap. So what’s next for the Kampot Playboys? After their debut Singapore tour, perhaps a tour in Thailand playing with Carabao on stage? Just imagine Uk Sochiet with Carabao’s Yeunyong Opakun (Ad Carabao) on vocals, Carabao’s Ajarn Thanis Sriklindee on khui and Playboys’ Vy Nget on tro Khmer, Od Carabao and Mark Chattaway on bass, Playboys’ Lee Chapman and Carabao’s Pao on drums, and Playboys’ Kev Selby playing accordion with Carabao’s Keo on keyboards.

The Kampot Playboys’ ‘Garuda’ can be digitally purchased and downloaded from https://kampotplayboys.bandcamp.com/releases

A fine art photographer moves on