Home - Why I take direct action when I see violence

Why I take direct action when I see violence

I have been traveling to Siem Reap by car since I got to Cambodia in 2010 and I love the drive. Passing through the countryside and towns on the way gives me a chance to witness a glimpse of the country life and wonderful views of nature, which we often tend to ignore because we’re already preoccupied with the hustle and bustle of the metropolis that Phnom Penh has become.

The new road to Siem Reap offers a comfortable and quick passage, so the drive is never unpleasant. Yet, there is one stretch of the road, about 50 kilometers out of Phnom Penh, that has turned into an eye sore, at least for me. Along the highway, just on the shoulders of the road, there are makeshift huts. There is a horrid display of dead bush meat, wildlife as well as the hanging carcasses of hairless cats and dogs – all for sale. In the past few months, while driving past it, I have witnessed large dead birds also displayed. I am no expert at recognising the wild birds – but those are certainly not domestic ones.

Generally, I drive without stopping and try to avoid gazing at the huts. Given the efforts to stop illegal wildlife trade by the Cambodian government and many dedicated organisations, this display fills me with a sense of hopelessness and even, desperation. Is there an end to this destruction of wild fauna by human hands? Having observed the never-ending tireless work of Wildlife Alliance and the Wildlife Rapid Rescue Team (WRRT) to stop wildlife extermination, this stretch of road becomes a grim reminder that the work must continue if we want to give a chance for the next generation of Cambodians to see wildlife in its natural environment.

Few days ago, I took yet another trip to Siem Reap and while passing the “death stretch”, as I now call it, I witnessed a large live wild bird being sold near one of these huts: a beautiful, young and terrified Spot Bill Pelican, with its beak tightly shut with a rope.

There were visible blood stains on the bird’s shoulders and wing. There were two private cars parked there and people were bargaining for the price. When I parked, one car promptly drove away and the men selling the bird where obviously concerned, trying to figure out why I was there. Will I buy this bird? How much would I pay? Am I another do-gooder barang with a “hero or saviour complex” that will cash out to pay for the bird to be “rescued”?

I was also rather uncertain about what I was going to do, so I took my phone out and started filming the scene. As soon, as I started recording, the dynamics at the scene changed dramatically. Out of the five or six sellers that were there, four immediately abandoned the hut, jumped on their bikes and sped away. The passengers of the second private car also quickly made their way back to their vehicle and drove away.

I was left there with a young man, who was still holding the bird and another, who hung around, but turned his back on me, so his face was not visible to the camera. I walked towards the bird, took it and told him to let it go. I also told him he was breaking the law by selling wildlife. He hesitated for a while and tightened his grip around the bird’s wing for a second, but then let go and released it. When the bird was released, I quickly took it to my car. Both men, in the meantime, sped away on their bikes in the other direction, trying to avoid further camera time. It became obvious that everyone in this gathering knew that what they were doing was highly illegal. 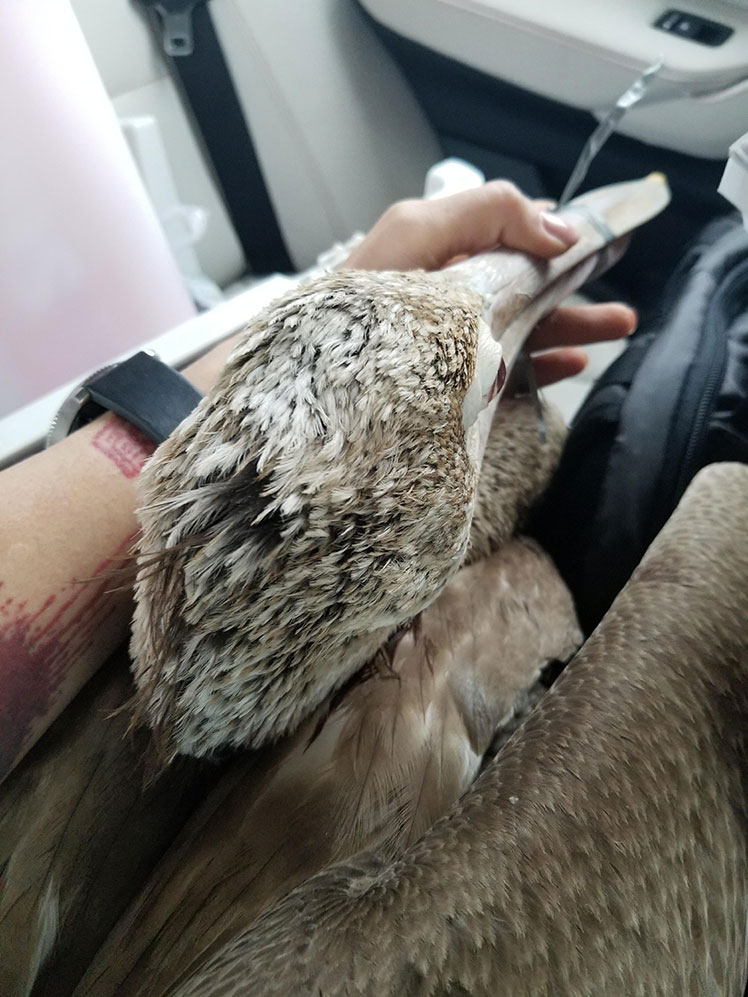 I took more pictures and videos of the bird, and sent them to the team at WRRT and Wildlife Alliance to ensure that I could take it to a safe haven immediately, where the bird could receive the proper rehabilitation it needed before being released back into the wild. I also posted it on Facebook in search for any bird sanctuary contacts in Siem Reap – where we were heading. I immediately got links to few organisations and contacted each of them in search for a solution.

Now, there are few realities about this incident I have to acknowledge. One, of course, is that my personal safety was highly jeopardised. Illegal wildlife traders are in it for cash, are often armed and may become dangerous. This could have escalated rather quickly and the violence might have been used to stop me from taking the bird.

Secondly, a wildlife bird such as this could carry numerous viral (and deadly) diseases such as the dreaded highly pathogenic avian influenza. So, such ad hoc rescue incidents are no joke and should generally be left to the authorities.

Yet, the reality of the situation I faced was rather a gloomy one. I knew very well that no one, and no rescue organisation would be available to seize the bird that late in the day and in the middle of the countryside. If I did not act in the best interest of this bird right there and then, it would end up in a soup that very same evening.

Moreover, if the bird was in fact ill and had been sold to private buyers, it would certainly not be tested for any diseases, and could in fact become the epicenter for the viral outbreak and human tragedies. In my case I knew how to go about this. With the help of social media, I was able to connect with Angkor Center for Conservation of Biodiversity, who accepted the bird that very same evening. The bird will be tested and will stay in quarantine until its release.

I have got some criticism from strangers who proclaimed that such things should be left alone. “You should report it and leave it to the appropriate authorities, if they can solve it. It is not your place to take wildlife from traffickers,” they said.

Generally, I would agree. But, let me ask you this: are we, as individuals and as global citizens, expected to go through life as mere bystanders, passive witnesses or keyboard warriors? Are we not affected personally by environmental destruction? Are we not witnessing personally the largest numbers of species extinctions in history? And all we can, and most importantly, expected to do is call someone, anyone, report and hope for the best?

Although the answer might be different for each, for me they are clear: I refuse to count on someone else to do something about the violence I witness. When I see the law being broken and suffering inflicted onto the innocent or helpless, I cannot stand still, wait and hope for someone else to change it. Each of us is responsible for the world around us. Each of us has a power to stop the injustice. The real tragedy is when we choose not to act, because it is easier to stay out of it or even better, to post on Facebook, gather some likes and hope for the best. This passive existence is the basis of all evils and humanity’s curse.

As my professor of holocaust studies once said, “the unimaginable violence can only be unleashed in its full force when active indifference is at the core of social order.”

When you see wildlife being sold or trafficked, please contact Wildlife Crime Hotline at 012 500 094. Never buy or offer reward for release of wildlife as this will only encourage the traffickers to continue. Seek help from the local authorities or police. Wildlife sales, trade, and ownership is illegal in Cambodia.

‘Archaeologists of the future’