Sonny Inbaraj Krishnan on why Joshua Chiang and his Boxchords are a cut above the other troubadours crooning in pubs all over Phnom Penh.

Joshua Chiang’s shows are always exciting and you can’t really box his music into a single genre – with his renditions vacillating from indie to rock and pop, peppered with Dylanesque folk rock themes and U2’s Bono-like social messages.

U2’s frontman Bono and his take on the state of the world has always been an inspiration to Joshua. In August 2014, he helped organise the “Music Not Missiles” benefit concert in Phnom Penh with all proceeds going to Oxfam’s work in the Gaza peninsula.

“Music can succeed where language can’t. Music is a language without borders that can be and should be used for peace,” he said in a press release. 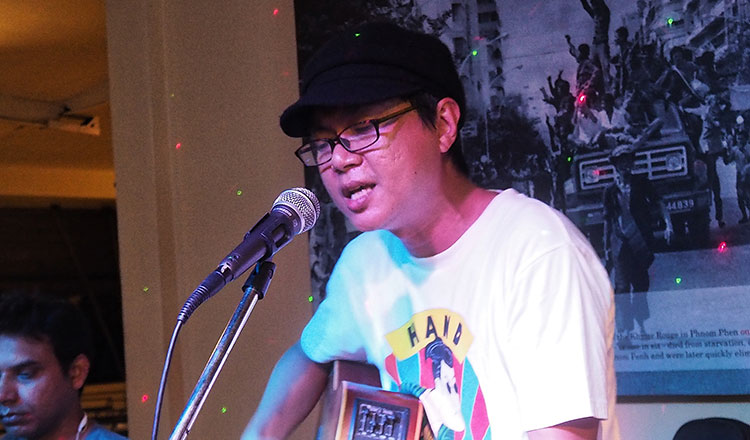 “Palestinians and Israelis are still burying their loved ones as Gaza’s third war in six years continues. There is never an excuse for deliberate attacks on civilians in a conflict. These are war crimes. This is true for both sides. Hamas’ indiscriminate targeting of Israeli civilians is equally unacceptable.”

Of course the finale in “Music Not Missiles” was Joshua Chiang’s rendition of U2’s “Sunday Bloody Sunday” joined by close to 10 musicians on stage in the now-closed Aquarium Bar.

For a guy who learned to play the guitar in his late teens, Singapore-born Joshua Chiang has certainly come a long way.

“I started learning the guitar quite late, at the age of 18, and only because I was injured while doing my National Service (compulsory for Singaporeans). I wasn’t fit for active training for six months, during which I was sent to help out at the cookhouse. There wasn’t much to do most of the time, so I just played around with this rusty guitar that belonged to one of the cooks,” he told Good Times2 in December.

When he’s not playing solo, Joshua Chiang performs with Boxchords – an acoustic trio he founded. With Joshua on lead vocals and rhythm guitar, Pervez Smart, from Pakistan, on percussions, and Filipino Denver Danang on lead guitar, the band reinterprets songs from a wide-range of music genres and also performs originals.

Take for instance ‘(Was a) Perfect World’, a Joshua Chiang R&B original, where he sings:

“It was a perfect world, why didn’t you make it?

It was a perfect world, why did you break it?

It was a perfect world, how did we lose it?

It was a perfect world, it’s too late to miss it…”

It’s Joshua’s interpretation of a ballad sounding like Jason Mraz in the high notes.

In the biblical ‘Prodigal Son’, Joshua cries out:

“Oh Father will you understand,

Why I fail to take your hand,

Oh Father, when I stand at your gate,

Without a ticket, will you let me in?”

But at the end of the day, it’s still Joshua’s ballads that carry him and Boxchords through and makes the Singaporean a cut above all the troubadours playing in pubs all over Phnom Penh. My personal favourite is his original ‘Love Has Its Own Mind’.

In Good Times2, he once wrote: “[The song] … came from this realisation that love – true love – carries you along with it, and makes you a bigger, better person. You also suffer more because the loved one’s pain is also your pain, but you bear with it in spite of yourself because love takes away that self-centeredness.”