Hundreds of football fans from around the world joined Heineken® City of Champions in Greece for the ultimate viewing party and live-screening of the epic UEFA Champions League final, including the first ever group from Cambodia.

The group was invited to fly to Greece after Cambodia successfully hosted the UEFA Champions League Trophy Tour presented by Heineken® featuring legendary striker Ruud van Nistelrooy at Koh Pich City Hall last month. Not only was this the first time for Cambodia to attend Heineken® City of Champions but it was the largest group invited to represent Asia as well as one of the top three biggest groups overall. 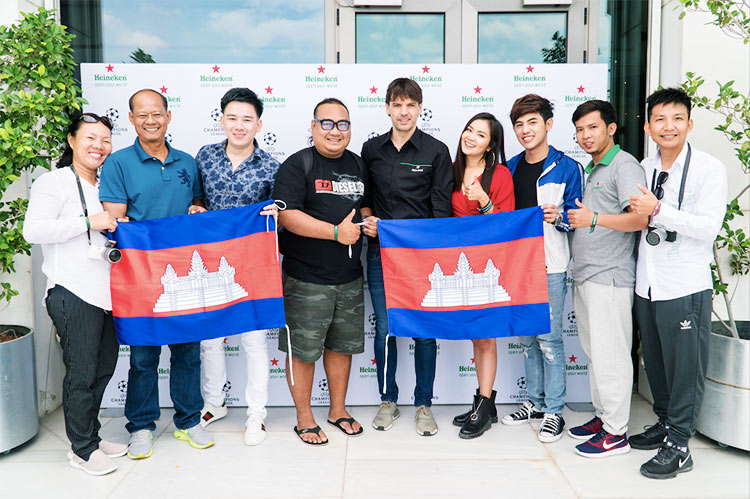 Heineken® flew them jetset style from Cambodia to the City of Champions of Athens in Greece and treated them to an all-expenses-paid five-day experience with a luxury stay at the 5-star Hilton Hotel, rooftop dinners, amazing parties, a beach BBQ and tours to historical monuments in Athens such as the Acropolis, the Temples of Zeus and the Parthenon.

They also met legendary UEFA Champions League winners Fernando Morientes, who played for Real Madrid and Liverpool, and Christian Karembeu, the French international footballer who played for Real Madrid. Both stars were so impressed with the group’s enthusiasm for international football they spent over an hour answering questions, giving tips, taking photos and offering to #ShareTheDrama of their personal Champions League moments.

The last night in Athens proved most dramatic as Heineken® arranged a convoy to take them to a secret destination for an ultimate viewing party of the UEFA Champions League final between Real Madrid and Liverpool. A Greek auditorium was used to create a premium Heineken® experience with an exclusive live screening of the final plus pre-match show countdown and post-match celebrations.

The audience was split between Liverpool and Real Madrid, so everybody had a chance to #ShareTheDrama and despite many shocks, surprises and upsets on the pitch the party atmosphere was extremely positive.

The group from Cambodia enjoyed the party so much they were almost the last to return to the hotel after an unforgettable evening of football, dancing and meeting newfound Heineken® City of Champions friends from all over the world.

The group buzzed with excitement on the flight back to Phnom Penh with everyone agreeing it was a world-class experience only possible thanks to Heineken®, the world’s most international premium beer.

Vattanac Capital celebrates its official inauguration in the heart of the capital, Phnom Penh