Prime Minister Hun Sen yesterday slammed the royalist Funcinepc party for claiming that the party would pay off debts for people if it wins the national election in July.

Speaking to about 20,000 workers in Kandal province, Mr Hun Sen said Funcinpec president Prince Norodom Ranariddh should not cheat people by promising to help pay off their debts if he wins the election.

“Cheaters cannot be allowed to use tricks to attract votes,” he said. “His promise will also encourage some people to take out more loans because someone would pay off debts for them. Please don’t play this stupid game that hurts the people.”

“Where is the money? Only a cheater who can say such a thing,” he added, noting that Prince Ranariddh wrote a letter to him a few months ago asking for a loan of more than $1 million to run his party leading up to the election.

On Sunday, Prince Ranariddh met with villagers in Takeo province and made promises to them that he would pay off debts if he wins the election on July 29, according to local media. 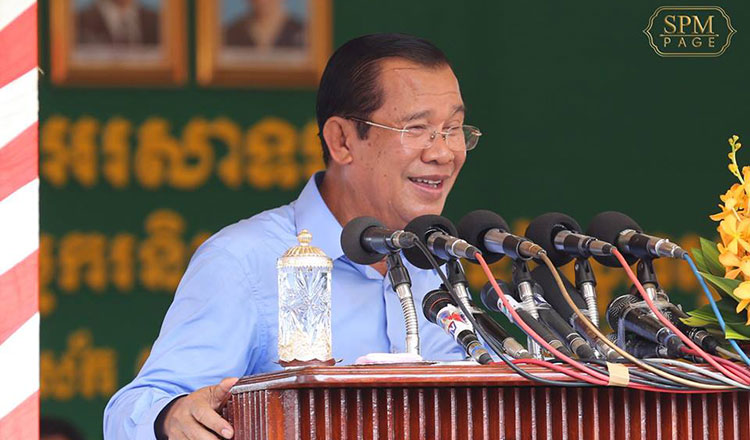 Phan Sehty, a representative of the Funcinpec party, said at a government-organised roundtable forum on Monday that Prince Ranariddh cared about the party’s polices and strategies to help pay off the debt for people who owe banks and microfinance institutions.

Prince Ranariddh and his spokesman Nhep Bunchin could not be reached for comment yesterday.

Mr Hun Sen added yesterday that his ruling CPP did not make empty promises like other parties, noting that the minimum wage for garment workers rose from about $80 per month in 2013 to $170 this year.

The premier also warned the Funcinpec party over its strategy to gain votes via its link to the monarchy.

“Some people [Prince Ranariddh] pretends to be from a royalist party by linking the throne and the monarchy to its political campaign to gain support,” he said. “It is not a good thing. It is not one party protecting the monarchy, but all political parties, and all people.”

“The monarchy belongs to all and it is not a monopoly to any political party,” he added. “And I am the one who protects the throne and the constitutional monarchy.”

Defense Minister Tea Banh yesterday also asked people to watch out for Funcinpec promising to help pay off debts for them.

“Please, everyone, look at the facts and who says the truth? Be careful with cheaters,” Mr Banh said while presiding over a military exercise. “Some people are cheating in broad daylight because one political party [Funcinpec] has promised that they would pay off debts for those who owe the banks.”