The announcement was made yesterday after a courtesy call between Prime Minister Hun Sen and the newly-appointed United Nations Development Program country representative Pauline Tamesis at the Peace Palace.

“Ms Tamesis told Prime Minister Hun Sen that the UN recognised Cambodia’s nineteenth agenda, which is now part of the UN’s SDGs,” he said. “In the SDGs, there were only 18 goals, but Cambodia added one more related to landmines and UXOs.”

Mr Sophalleth added that the UN pledged to help Cambodia to achieve the SDGs, including the mine clearance goal that hopes to see the country rid of landmines and UXOs by 2025. “Recognition provides many benefits,” he said. “First, the UN recognised the importance of demining and landmine issues of other countries, not only Cambodia. Second, the UN will join us to demine Cambodia.”

Mr Hun Sen thanked the UN for accepting and supporting Cambodia’s agenda because the landmine and UXOs issue is a government priority that needs to be resolved, Mr Sophalleth said.

In 2015, world leaders adopted the 2030 Agenda for Sustainable Development Goals to end poverty, protect the planet and ensure that all people enjoy peace and prosperity.

Mr Hun Sen promised during the UN summit on the goals in New York that the government would continue to prioritise mine clearance.

The number of mine and ERW casualties has been brought down from 4,320 per year in 1996 to an annual average of around 100 per year over the last five years.

The Cambodian Mine Action and Victim Assistance Authority estimates that 2,000 square kilometres of land remains to be cleared. 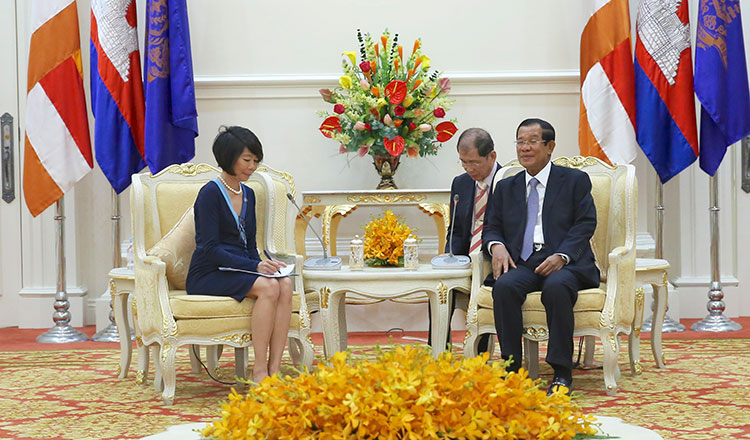 The government is aiming to make the country mine-free by 2025, but an official with the Cambodian Mine Action and Victim Assistance Authority recently said that if donors are unable to raise enough money, the goal could just be out of reach.

Over the past 25 years, the government has allocated $160 million to demining efforts, while the international community raised a total of $473 million to support efforts.

Speaking at a closing ceremony of the National Mine Action Conference earlier this month, Mr Hun Sen reiterated that the UN did not list demining in its SDGs.

“I think that the document organisers might organise the list without feedback, or they do not accept the truths about countries affected by landlines,” he said.

According to a press release issued by the UNDP yesterday, Ms Tamesis said the UN and the Cambodian government have a long history of successful partnerships.

“I feel privileged to continue this strong relationship, particularly at this crucial stage of the country’s vision to become an upper middle-income country by 2030,” she said.

“I also took the opportunity to reaffirm the commitment of the United Nations to support Cambodia’s national development priorities,” she added.