Interior Ministry police are looking to arrest an accomplice of an arrested police officer over the beating of a man who was accused of stealing a motorbike last week.

Iv Borin, director of the judicial department at the Interior Ministry, said that authorities are looking to arrest an associate of Sok Pisal, a police officer who was charged for the crime on Sunday.

“We are still looking for his partner and as of now, we already identified him but we can’t make any arrest yet,” he said.

Mr Pisal, chief warrant officer at the Interior Ministry’s science and technology department, was charged on Sunday by Phnom Penh Municipal Court after he was arrested by police over the beating of an alleged thief who had stolen his friend’s motorbike.

A video published online shows a police officer, along with Mr Pisal, beating the victim as the victim begs for mercy. In the video, the victim denies the accusations made against him by Mr Pisal. 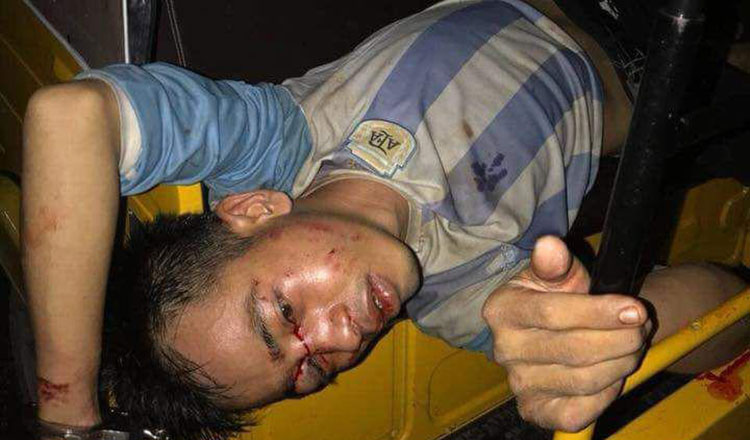 Mr Borin said that he was not aware of the online video and could not confirm whether or not the man in the video is the suspect authorities are looking for.

He said that police are looking for another person involved, but declined to identify the suspect.

Sok Khemrin, director of the penal department at the Interior Ministry, said that there was definitely more than one person involved in the beating.

“For Sok Pisal, we sent him to jail,” he said. “For his partner, we are still waiting for the arrest warrant from the court. From the information we received, there is only one additional suspect, but if there are other people involved, we’ll get them too.”

Mr Pisal was sent to court on Saturday over the beating of the victim Thursday night in Chamkar Mon district’s Boeng Keng Kang 3 commune.

Mr Pisal confessed that he aided his friend Im Panha in his quest to get his bike back from the accused thief, whom Mr Panha knew.