The national election in July is going to be dominated by the presence of male heads of parties. However, one woman will be among a handful of women contesting the election.

Dharmacracy Party is one of the 20 parties verified to participate in the election by the National Election Committee. Sen David speaks to Dharmacracy Party president Pothithey Sawathey to find out what drove her to make the move from being a baker to a politician.

For a video, please visit our website at khmertimeskh.com

KT: I heard that you went from a baker to a politician, I’m sure it was not an easy feat. Can you tell us a little bit about your background and how you became who you are today?

Sawathey: Now, I am 62 years old. My hometown is at Siem Reap province’s Bakong district. I am a single mother – a widow with eight children. I am also an orphan, I grew up selling cakes.

Many think that my name sounds royal but I have no relations at all with the Royal Family. However, a member of the Royal Family supported me when I was young and I was able to study at university and become successful with my cake business.

KT: You come from a humble beginning and managed to achieve so much in business, what made you decide that politics is something you want to get into?

Sawathey: My experience in leadership started when I was the head of an association in my home province. I wanted to do this to help the people of Siem Reap manage their agricultural sector. I supported them by giving loans in my village for agriculture. I believe in spirituality and I have my spiritual mentor at Kulen Mountain. I have always believed in him because he’s highly noble. After I returned from the Netherlands, I felt the urge to help improve the social condition of my village because they were poor. I wanted to help them improve their lives. At that time, I wasn’t able to because my funds were limited. My spiritual teacher then urged me to create a political party and I decided to create this party to contest in the upcoming national election.

KT: How did you become the president of the party?

Sawathey: I am one of the founders of this party and I have the support of Dharmacracy Party cadres – they chose me to be their president. I love them as much as they love me and I help them to improve their lives so they chose me. They think that I am suitable to be the leader of the party because they are confident in my ability to win.

When I first created this party, I had to prepare so many documents and abide by so many rules and conditions. I asked Eng Chhay Eang and Norodom Ranariddh for their advice on what party rules to establish and we compiled 20 pages of party regulations – it’s a lot. It took me an entire day to prepare the rules and conditions and it amounted to 10 pages. Next, I got in touch with the Interior Ministry and after one week, an official letter arrived stating that Interior Minister Sar Kheng had approved the request and then I registered with the NEC. And now my party is recognised by the NEC and we will compete in the upcoming election. 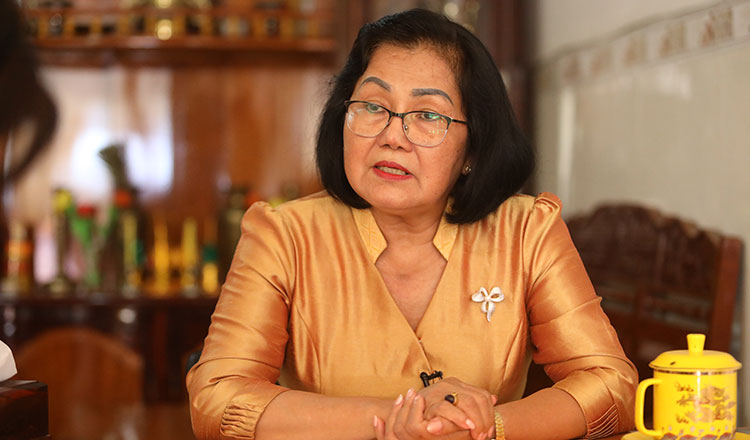 KT: The political arena is dominated by men and here you are the only female party leader. What do you think about this? Do you feel as if you have to work twice as hard as a woman?

Sawathey: That’s a very good question. I am proud to represent women throughout the country. Yes I am the only female party leader. But it shows that women can also do the job as well as men; women can be political leaders. What I want to see is more of our women standing up and being brave and joining the political sector. Don’t be shy and don’t be afraid. Please share your ideas with the public.

KT: What are some of your party’s policies?

Sawathey: Dharmacracy Party has 7 major policies. First we have our social netting policies and programs such as an allowance system for those who are unemployed. Also, we want to offer loans for students to pursue their education all the way to university. Secondly, we want to change the education sector and we want to allow monks to teach in schools owned by the state to instill virtue on our society. Third, we want to provide health insurance for those who can’t afford it. If we win seats during the election, we want to improve the health of all Cambodians. Fourth, we want to create a sustainable agricultural environment for our farmers in order to give them a better life. Fifth, we want to eliminate corruption because it is a sickness of society and an obstacle for the country’s economic development. Sixth, we want to increase the minimum wage to about $300 per month [for garment workers]. And seventh, we want to examine the country’s immigration policies to curb illegal migration.

KT: What are your plans like for the campaign? And how much of an impact do you think your party will make?

Sawathey: NEC has given each party 20 days to campaign and my party has ten electoral rolls like in Siem Reap, Kampong Thom, Kampong Cham, Prey Veng, Kandal, Kampot, Takeo, Kampong Speu and Battambang provinces. We are aiming to do two provinces per day.

If you look at the timing of the creation of the party then maybe my party might not look formidable. But if we consider thousands of our supporters then my part looks very strong. They love me and they have been honest with me since I have been working for the association to help them.

KT: How much do you expect your party to win?

Sawathey: I must be confident if I want to win. I believe that it takes 50 percent to win the upcoming election. I have this policy; if my party wins, we will follow up on the programs I mentioned earlier. We will work to develop this country and Cambodians will live a peaceful life – a better life.

In life we have to do things with confidence because without it, there would be no success. Especially for a woman. I am a woman. I know a lot of a woman’s needs, rights and about how a woman makes a living. So please, believe in my party and your life will be good.

KT: Social media users are on the offensive over a statement you made about voting. Can you clarify what you meant by “If you don’t come out and vote, you will be punished by history”?

Sawathey: Let me clarify. When I first came to register at the NEC, a journalist approached me and asked me a question. I was quoted and it was shared on Facebook. These users only read the title of the article and then they attacked me. They did really read what I said in the text.

What I meant was if residents do not go out and vote, either voluntarily or involuntarily, they would have been punished by history. Why? Because when the election is done, and no one came to vote then that would be a national disaster. The international community will take note and write this in history.

They get confused and they don’t understand but I don’t care. I still thank them for making my party famous and let everyone know our name.

KT: There are those who say that the country is in a political crisis situation. Some say that Cambodia is no longer democratic because of recent decisions by the government. What do you think of the current political atmosphere in the country?

Sawathey: The political situation in the country has been very hot since Cambodia National Rescue Party was dissolved by the Supreme Court. The pressure put on several non-governmental organisations and newspapers wasn’t helping the situation either. There’s international condemnation for our country over democracy. This has to change now. That is why I had to appear and create a political party. I will bring water to extinguish this fire. I have to wipe the tears of the Cambodian people that have suffered from injustice. They have suffered from landlessness, joblessness and other injustices prevalent in this society. The presence of my party and I will bring hope to all people.

More than 100 workers faint at a factory in Kandal province