Home - Public urged to watch out for fake products

The Interior Ministry has issued a wide-ranging appeal for vigilance against counterfeit products after more than 200 tonnes of fakes, including chemicals, were destroyed in the first five months of this year.

The ministry’s Counter Counterfeit Committee made the call to authorities, the public and the private sector to protect people’s welfare. The committee added that another 100 tonnes of fakes were still to be destroyed.

The call was made at a seminar at the ministry yesterday on the management of investigations of criminal offences and transnational crime related to drugs and illegal counterfeit products.

Meach Sophanna, an undersecretary of state and the committee chairman, said that in the past the committee and officials had tried to spread information and educated people about the dangers of counterfeit products.

The committee had also cracked down on hundreds of cases in the first five months of this year, he added. He said there were 100 tonnes of products going through court procedures that they were going to destroy soon. 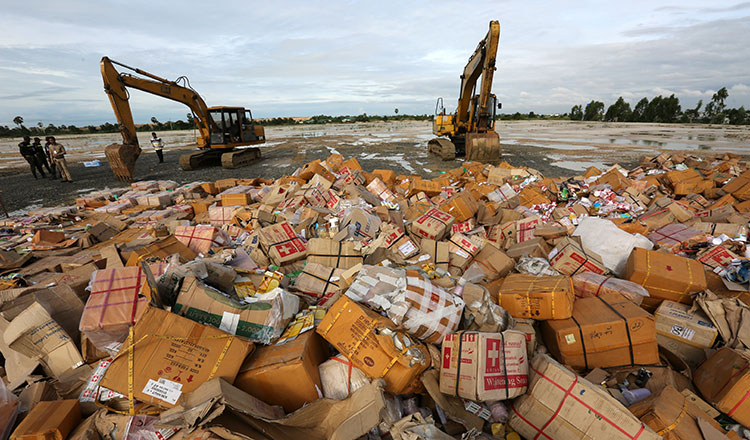 “We want the public to be vigilant, and the police also have to try to check imports and crackdown on counterfeit products,” he said.

Fake products that have been seized include food, coffee mixed with ingredients that are harmful to health, cosmetics, medicine and many other materials.

In April, officials raided a Daithnh coffee production facility which was mixing more than seven tonnes of ingredients in Phnom Penh’s Prek Pnov commune amid rumours of Vietnamese authorities cracking down on coffee production that used battery chemicals.

Mr Sophanna called on all facility owners and vendors selling coffee to produce it using proper raw materials, and to avoid mixing it with roasted corn, roasted soybeans, butter, coconut milk and other ingredients that harm consumers.

“These crimes have been investigated in accordance with the law and the evidence,” he said. “Products have been seized to be destroyed.”