Sinon Loresca was kicked out of home as a teenager after coming out to her parents as gay.
Years later, things have dramatically changed for her as she tells Rama Ariadi her life story.

Sinon Loresca is by no means an ordinary individual. As soon as she makes her entrance, she commands the attention of everyone in the room – and I found that out in NagaWorld last weekend. After all, Loresca cuts a striking figure that is really quite impossible to miss.

In a way, she is a personification of a post-modernist individual. Unbound by the conservative societal norms, she straddles the social construct that is gender, sitting comfortably between traditional masculinity and hyper-femininity with her distinctive signature that earns her the moniker “King of Catwalk”. Balancing the opposite ends of the spectrum isn’t as easy as it seems – and what Loresca had achieved is no feat to be underestimated, especially considering that she did it – day in, day out – on 12-inch platform heels. 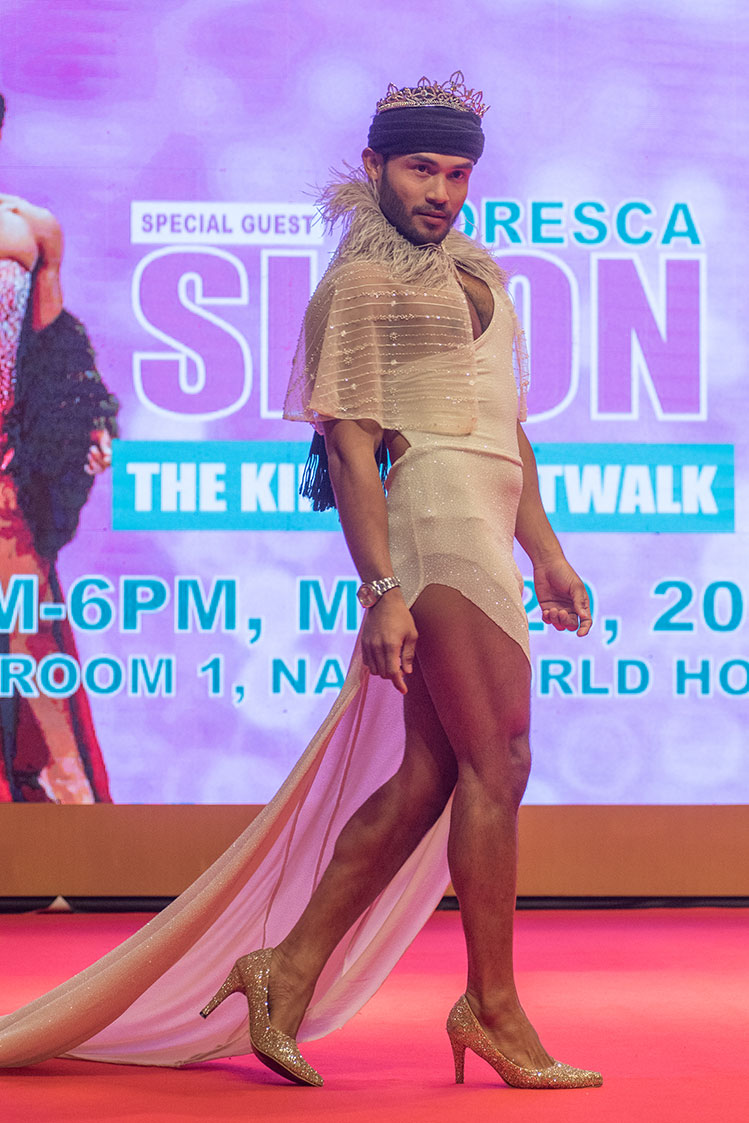 While these days, her life is filled with glitz and glamour, things were not always so easy for her. As a child, Loresca never felt comfortable in her own shell. Her childhood was not made easier by the fact that she grew up in the Philippines’ Bicol region, in a deeply conservative, Roman Catholic family, where norms are expected to be adhered to, to a tee. “Growing up, I was never fully accepted by my family because I was different,” began Loresca. “I was expected to ‘straighten up’ – to get married to a nice woman and give them grandchildren.”

Upon coming out to her parents as a gay, transgender man, Loresca was kicked out at the age of 18 from her family home to live with a relative. “[My relatives] couldn’t understand what I felt, or what I was going through – but at least they would let me be,” she continued. While this may sound like a breath of fresh air, things didn’t immediately take a turn for the better for young Loresca.

Her relatives that took her in were not by any means well-off. As such, Loresca had to fend for herself to live. “At one stage, I worked in the streets as a recycler,” she reminisced. “I picked up plastic bottles and scraps from the streets for chump change – I did what I had to do to survive.”

Despite the challenges that she had to endure during her formative years, Loresca never gave up. “Since I was a child, I’ve always dreamed of becoming a supermodel,” she continued. “Beauty pageants are huge in the Philippines – and I told myself that one day I will prove my doubters wrong, and make a name for myself by being true to myself and my dreams.”

After years of hard work, Loresca’s fortunes began to look up in 2010 – when she moved to the United Kingdom to live with her sister and her family. “It was then when I realised that the Filipino community in the UK is very robust, and many of them longed to see and hear stories and jokes that reminded them of home,” she continued. “So in 2011, I decided to create a YouTube channel for exactly this purpose – to be the bridge that connects the diaspora community to the Philippines.”

As luck would have it, Loresca’s YouTube channel turned out to be the beginning of her international career. “My videos received more than one million views, and that’s when it piqued the interest of the producers of a variety show in the Philippines,” said Loresca. “But it was the catwalk videos that I made in 2016 that became viral, and earned me the moniker, the King of the Catwalk.”

And indeed, something bigger did come her way. Since her debut, Loresca has starred in multiple TV series and movies. Stardom, it seems, is within her reach, but she didn’t stop and rest on her laurels. Loresca wants her life story to inspire and empower individuals who are facing the same challenges that she once had to work so hard to overcome – that is, to break the glass ceiling of heteronormativity.

“The world is changing, that is a fact that cannot be denied, but ultimately, we have to be content with ourselves first,” said Loresca. “For everyone out there who feels like they cannot pursue their passion because of social stigma, don’t be discouraged – keep the fire alive, and persevere until the goal is within reach.”

Not just a plain housewife