To improve the standard of Cambodian football and produce talented players that bring glory to the national team, it is important to enhance the development of the sport at grassroots level.

With this in mind, NagaWorld yesterday launched the Football Development Programme at Kampong Speu, a two-year initiative hosted through NagaWorld Kind Hearts. The pilot programme will see sports teachers from all 94 secondary and high schools in the province of Kampong Speu receive free professional training in football coaching techniques and training equipment.

Teachers will start with a four-day course, held from October 2 to 5 at the Department of Education, Youth and Sports in Kampong Speu, after which they will receive an official D-license (grassroots) coaching certificate from the Football Federation of Cambodia (FFC).

“Moving forward, to create a systematic and sustainable development of football in Cambodia, we will be focusing our efforts on providing a skills training platform for sports teachers. This training programme will teach educators to become proficient football coaches with an eye for talent. Once armed with these skills, coaches will in turn be able to train and develop the next generation of football players,” said NagaWorld Managing Director Pern Chen.

Kampong Speu Governor H.E. Vei Samnang said his province is overwhelmed by the helpful gesture of NagaWorld in moulding its youths to become the future faces of Cambodian football.

“We are delighted that NagaWorld and other organisations are hosting this programme in our province, which stands to benefit approximately 18,500 male and female students between 12 to 18 years old,” the Governor emphasised. 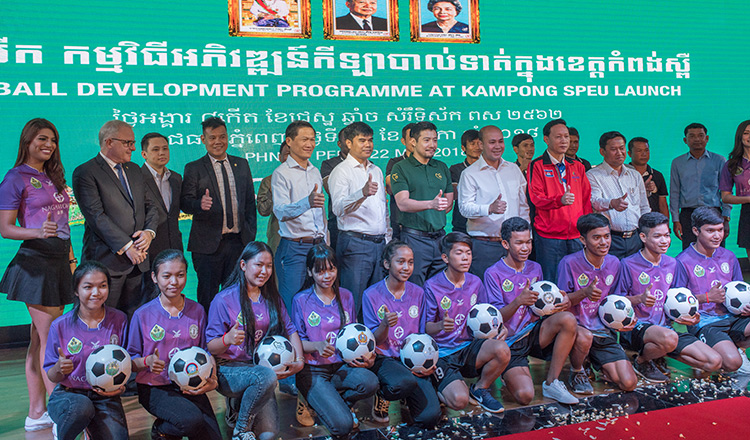 Aside from the FFC and the provincial government of Kampong Speu, the Ministry of Education, Youth and Sport (MoEYS) and the Union of Youth Federations of Cambodia (UYFC) have also expressed full support and cooperation with NagaWorld in this new initiative.

MoEYS Secretary of State H.E. Sean Borath reiterated that instructed coaching at schools is the best way to develop football skills among youngsters in the provinces. He added that the sport, which has become hugely popular in the Kingdom over the years, has become a bridge in building solid friendships among Cambodian youths and those of other nations.

President of the Union of Youth Federations of Cambodia H.E. Hun Many, who also holds a seat in the National Assembly representing Kampong Speu constituency, expressed his support to NagaWorld’s programmes for youths. The government, Mr Many said, is committed to developing local sporting talents and raise the standard of school coaching, which will in turn generate the best players for domestic clubs as well as for the national team.

With the new development programme, teachers will be expected to enhance their football coaching at their schools and eventually help unleash the potential of young Cambodians on the football field.

Two-time Cambodian League champions NagaWorld FC – who currently head the table with an unbeaten record – and other football clubs will be looking to offer professional contracts to the best performing students from the programme.

As H.E. Hun Many and other guest speakers kicked footballs into a net to officially commence NagaWorld’s new football development programme, there’s high hopes that Cambodia’s passion for sports will continue to grow.

True grit Sharapova back with point to prove