About 70 people representing thousands of Kampong Speu province households yesterday gathered once again in front of the Land Management Ministry to appeal to the authorities to take action against three rubber plantations and a sugar cane plantation over more than 2,000 hectares of disputed land.

Im Chem, a villager representative, said that three groups of people from Hoang Samnom, Sangke Sratob and Trapaing Chor communes are locked in a land dispute with Fortuna and HLH companies.

The villagers came to the Land Management Ministry in Phnom Penh after previous requests for intervention from the government were neglected.

“The land is the people’s lives. So the ministry, please help get our land back as soon as possible,” Mr Chem said. “This month is the rainy season and we have no land for farming. Our land was cleared by companies in 2011 and we haven’t seen any development.” 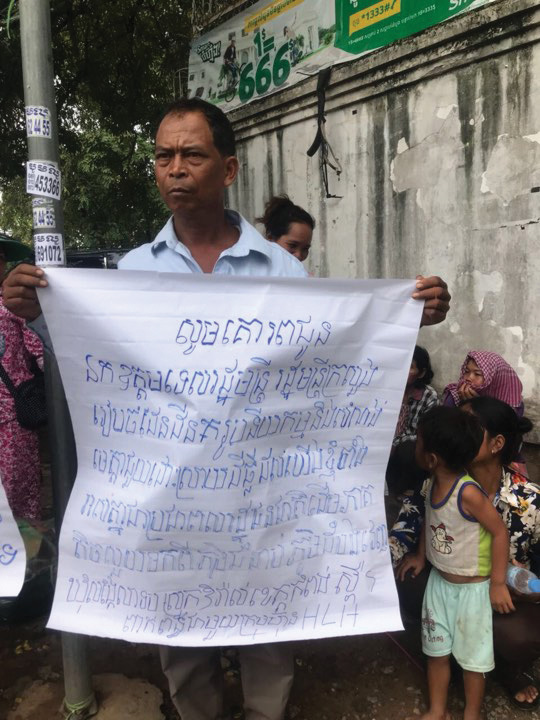 Heng Ran, head of Land Management Ministry’s Working Group for Land Dispute Resolution, said that the working group is ready to commence the identification process of all stakeholders from the disputed land starting in June.

“I will go in the first week of June. I will go there to Haong Samnom commune first and then meet other communes,” he said. “I would like to go there to meet people so that they can say what they want to us directly. We will work hard to solve this dispute.”

Vei Samnang, Kampong Speu provincial governor, met with villagers yesterday in front of the Land Management Ministry office. He came with food and transportation with the intention to facilitate the villagers’ return to the province.

“We have their documents in hand and I have assigned an official to be in charge of solving the dispute,” he said. “But it is too early to solve, we need to find out exactly who is involved.”

Company representatives could not be reached for comment yesterday.