The Labour Ministry yesterday announced that 12 domestically-produced trucks were being donated to two NGOs tasked with getting factory workers in Svay Rieng province to work safely, adding that a micro-financing scheme might be put in place to help drivers obtain safer vehicles.

The Daehan Auto Cambodia Company donated the the trucks to Prime Minister Hun Sen yesterday and the premier decided to hand six to the Union of Youth Federations of Cambodia and six to the Techo Volunteer Youth Doctor Association through the Labour Ministry.

The donated trucks are enclosed and have seats for the workers, a safer option than the open flatbed trucks that currently carry standing workers across the country.

Labour Minister Ith Samheng said that through the two organisations, the trucks could help assist factory workers across the province get to work safely.

“We appreciate Daehan Auto Cambodia Company for producing this in our Kingdom,” he said. “The trucks will be used to transport workers and ensure their safety and comfort.”

Kaing Monika, deputy secretary-general of the Garment Manufacturers Association in Cambodia, said that his organisation welcomes the initiative from the government.

“It’s very good as it will bring about a higher level of safety and comfort,” he said. “The buses and vans produced in Svay Rieng province are both technically and legally fit to transport passengers.” 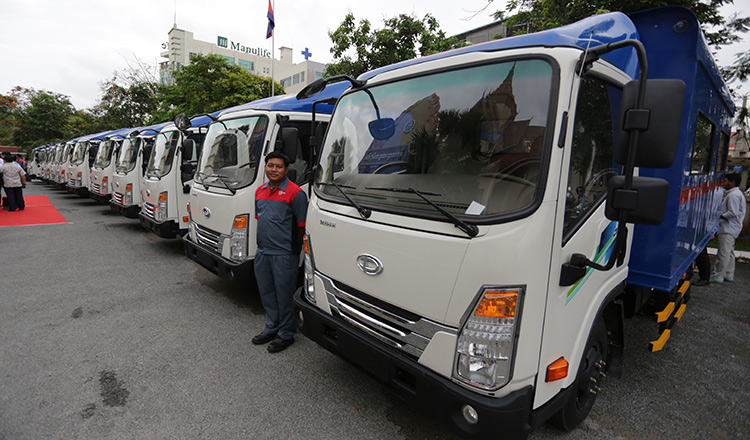 Prime Minister Hun Sen said earlier this month during a visit to an assembly plant in Svay Rieng province that the government is taking a close look at the possibility of starting a micro-financing scheme to help drivers obtain safer vehicles to transport workers.

“Through a low interest rate loan, factories can transport our garment workers across the country more safely,” he said. “I hope that automobile factories in Cambodia can produce good quality and safe automobiles.”

“We are discussing with Daehan Auto in order to create a bank providing low interest loans for truck drivers,” he added.

Mr Monika responded to the statement by saying that a government-led mechanism should be put in place so factories may provide safer trasport for workers.

“One of the major problems in terms of worker transport safety is the availability of proper vehicles that meet safety standards,” he said.

The National Social Security Fund released a report two weeks ago saying that traffic accidents involving garment workers declined in the first quarter of this year when compared to the same period last year. The report said that there have been 524 traffic accidents in 2018, a 46 percent drop.

NSSF spokesman Cheav Bunrith attributed the drop to an increase of safety awareness.

“For the first four months of 2018, NSSF officials held traffic road education events 216 times at factories,” he said at the time. “About 46,000 workers came to listen and we provided events to drivers 82 times.”