Two officers were killed yesterday morning when the car they were travelling in toward Phnom Penh smashed head-on with a cargo truck on National Road 4 in Preah Sihanouk province’s Prey Nop district.

Seng Chamroeun, deputy police chief of Prey Nop district, said that the two officers were likely in the wrong as they crossed into the oncoming lane and got hit by the truck.

“It is confirmed that the death toll is up to two and according to what I heard, it was likely that the small car carrying the two officers ran into the oncoming lane,” he said.

The National Police reported that the head-on accident happened at about 11am when a Camry car crashed with a container truck, leaving the car seriously damaged. 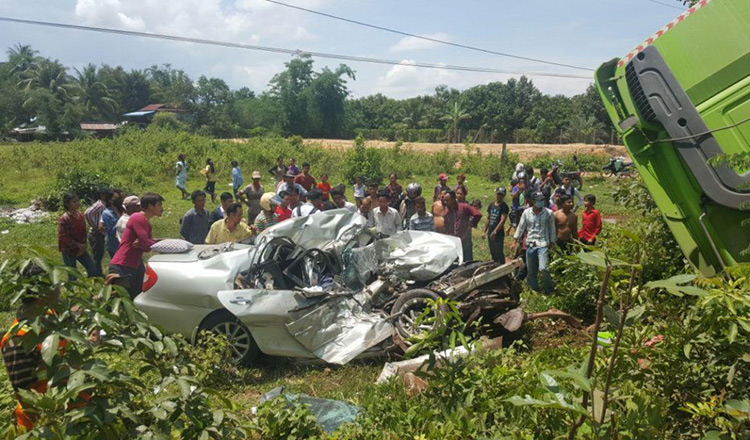 Chuon Narin, provincial police chief, said that the officers were on their way from the province to the capital to deposit $11,300 with the National Treasury.

“They were on their way from Preah Sihanouk province to Phnom Penh to transport money to the National Treasury and they got hit by a large green truck from the opposite direction,” he said.

Mr Narin said that Mr Sokny was pronounced dead at a private clinic in Veal Rinh commune and Mr Nov died at the scene, while the truck driver was not injured and fled the scene.

The two vehicles were impounded at the Prey Nop district police and the money was securely kept by the police, he added.