Prime Minister Hun Sen said yesterday that he gained his close relationship with Cambodian people through his Facebook page, which hit ten million ‘likes’ on Sunday.

Mr Hun Sen said on Facebook yesterday that the platform has allowed his relationship with civil servants, armed forces, citizens, youths, and workers across the country to develop.

“Through Facebook, I have also got to know the well-being of compatriots and have received a lot of requests from you and successfully solved a great deal of problems for you, nieces and nephews,” he wrote.

Mr Hun Sen said that citizens should use Facebook in a useful way for themselves as well as for society.

“I would like to thank all of you living both inside and outside the country, including all my foreign friends who love me and support me on Facebook, for helping me hit over ten million ‘likes’ today, and congratulations to you all,” he said. “I wish you good luck.” 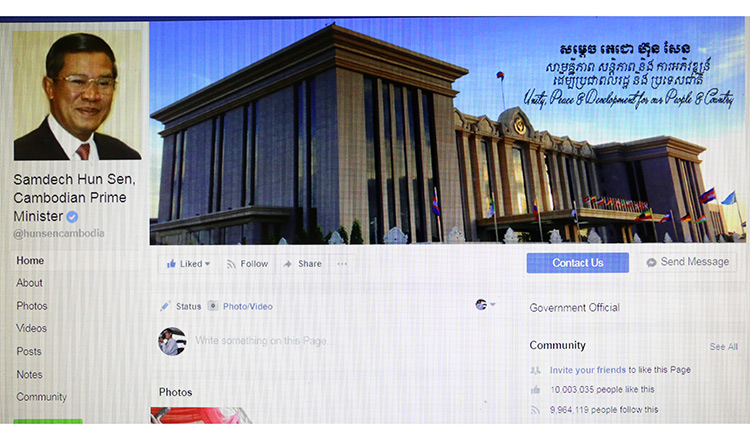 Earlier this month, Mr Hun Sen ordered the Ministry of Health to reverse its stance on the process to accredit medical school graduates from universities in Vietnam without any additional exams after graduates complained on his Facebook page.

Cheb Vandara, a Cambodian medical student who studied in Vietnam, said yesterday that thanks to the premier’s Facebook page, the graduates’ problems were ironed out.

“Related to solutions via Facebook, he wants to know everything from all of his citizens and officials and he needs all information from locals so that solutions can be found,” Mr Eysan said.

An analysis by social media firm Socialbakers showed in 2016 that only 57 percent of Mr Hun Sen’s Facebook ‘likes’ came from inside Cambodia, with the rest coming from other countries, including India, Thailand, the Philippines, Vietnam and Brazil.