Representatives of the LGBT community have renewed their plea for the government to reform the law on marriages and adoptions.

Rainbow Community Kampuchea urged the government to give full legal backing for the changes and to provide legal documents to LGBT people.

RoCK coordinator Pisey Ly spoke on Wednesday at the launch of the latest Destination Justice report, Revealing the Rainbow, at the Royal University of Phnom Penh.

Ms Ly said LGBT people had strong support from the government, local authorities and the public. They could openly appear in public without fear of being judged as bad or strange.

“In the past, we have also worked in cooperation with local authorities with discussions starting from personal matters, family, society, and the problem of racism in the communities,” she said. “So, we see that we can work together, but we can not work fully due to legal obstacles.”

“We have rights, but our rights can not be used comprehensively yet,” she added.

Ms Pisey urged the government to provide legal documents to LGBT people so that they can get the same full rights as other people. These documents include marriage certificates, family books, and the provision of national ID cards following their sex preference and adoption. 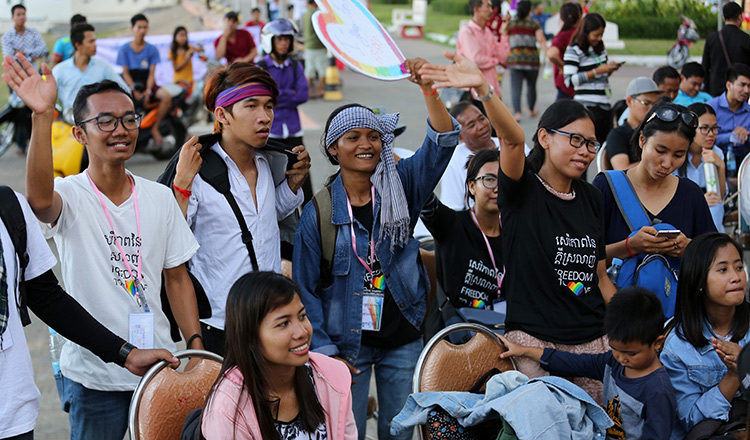 LGBT community member Tuy Reaksmey said these legal documents were very important to them, and helped to show their loving relationships proudly in public.

“I’ve been living with my partner for four years already,” she said. “Our families have recognised us but we still need legal recognition and protection to make our relationship more confident.”

Justice Ministry spokesman Chin Malin could not be reached for comment yesterday.

However, Kheng Somarith, deputy director general in charge of the civil code at the Justice Ministry, said that generally birth certificate details determining whether a baby was male or female were provided by the parents.

Other documents such as identity cards, passports and family books were made in accordance with birth certificates because the law did not allow for sex change depending on the person’s desire.

The law has not yet allowed for same sex marriages because the issue takes time and requires deeper study and analysis in detail of the advantages and disadvantages that can occur when a person asks for a sex change, he said.

Despite the promotion of such rights, he had seen that some LGBT people were still subject to discrimination in the community, in hospitals and in the workplace.

“On behalf of OHCHR, we have always committed to work with civil society, organisations and the government to promote human rights, and homosexuality is also a human right,” he said.

According to the government, the country has more than 33,000 LGBT people including about 5,000 couples who live together. However, the law still has not yet recognised the legitimacy of their marriage.