It all started with individual skills and passions. Rothana Chhourm was into drawing and sketching, and later found ways to learn animation. Visal loved computers and was always curious about programming. Piseth, the eldest of the, was into business and marketing. He has spent years selling products to clients and has eventually learned the ropes of producer-consumer relationships. Malis, the rose among the thorns, was into Information Technology. She, too, learned digital artistry on her own.

In 2014, the siblings ventured into the gaming scene with nothing else but passion, skills and love for video games as their capital. Four years since they established the game design startup, they are now rapidly becoming leaders in the industry as their humble company, DirexPlay Lab, continues creating and publishing mobile games that have become popular among Cambodian gamers. Being both the employers and employees of their own company, the four siblings play separate roles and responsibilities.

Piseth, 28, acts as the Managing Director. He deals with clients, sponsors and game publishing platforms. He does the musical scores, sound effects and dubbing of the games, too. Malis, meanwhile, is responsible for the overall look of the game. She creates the environment where the characters play and fight. The 24-year old IT graduate takes her time to create realistic settings as she gets inspiration from real buildings and iconic spots in Cambodia and in the region. Rothana, 26, gives the face of the characters. His task focuses on the animation – the movements of both the protagonists and antagonists, as well as the directions of the other elements. Visal, the youngest of the siblings at 23, does the final but equally challenging task – putting everything together and making sure they all fit perfectly.

It’s a daunting work considering the complications of the digital world, let alone creating one. They have to spend several months designing and developing one game and wait for approvals or rejections from the game distribution services before they can call their endeavour a genuine success. Piseth Chhourm recently spoke to AGNES ALPUERTO and SAY TOLA.

GoodTimes2: How and when did you start DirexPlay?

Piseth Chhourn: We really started with Windows Store. That’s where we developed our first game. Then in 2015, we started to expand to Android. That time, my siblings were still studying and we were still at the stage of testing the potentials and limitations of our skills. But we realised that in Cambodia, or even in the whole world, people play games. Some digitally, all of us in real life. So we took that opportunity to provide something to the people, to the local market. We wanted to give them quick source of fun. So we started creating video games. The concept of a mobile game isn’t really complicated. It’s not something grand as being educational or informative. It’s just for fun – a break from work or school or while waiting for the bus.

GoodTimes2: How do you come up with the concepts of your games?

Piseth: Our concepts and the characters usually come from Khmer textbooks or from mythology. We browse through several books to see if we can create a game out of the existing cultures, beliefs, traditions and arts in Cambodia. And we always make sure that our characters and the environment where these characters exist are realistic and natural. We don’t want to create confusion among our players. We still want to uphold what’s real. It’s like we’re just making a mobile game version of the real society. We give credits to the books and written references as our source of ideas and information. We have several books with us that we read often for guidance and accuracy-checking. Also, even if our games contain mostly action or fighting scenes, we make sure they don’t appear violent. We use water guns as weapons and our characters have cartoonish bearings.

GoodTimes2: Take us to the process of creating a mobile video game.

Piseth: We brainstorm our ideas and concepts for the games we want to produce. When we finally agree with one concept, that’s when we start prototyping. After we see that the game can be further developed, we move forward to creating the real game. We establish the environment or the setting, and then give the characters their designated personas. Then fit them all together and see if they’re good. What’s hard with having three people to do the individual elements of the game is that we’re not really sure if all of their works will fit nicely. After we complete the project, we submit it to Google Play or to App Store for review. They have their own policies and regulations. If they find any violation in our game, they’d reject it. Then we work on the changes again and re-submit it. It’s a no-sleep job, really. We have to wait and pray for the approval.

GoodTimes2: The Jailbreak video game is considerably the first of its kind – a game based on a movie – in Cambodia. How did you deal with the creators of the film?

Piseth: With Jailbreak, it was a different work for us. Our workflow changed since the concept was already there. We had to abide by the flow of the story. But it was really one of the best games we’ve ever produced. The game was released on the day the film was shown in cinemas. But before that, we had to redo some parts as Google Play initially questioned our ties with the film production. We submitted the game on January 28 and didn’t sleep until we got the final yes. Jailbreak was a surprise success. We expected to get 50,000 downloads in three to six months from the release date. But in just a month, we already surpassed the target. It’s record-breaking. We ranked first on the game digital distribution platforms. But we have taken down the game now as the phases or stages of the game have already ended. We’re still thinking if we’d develop it further or just kill it permanently, as we are currently working on a new game concept.

GoodTimes2: How is the mobile game market in Cambodia?

Piseth: I don’t think there’s a solid and stable market in Cambodia yet. We are just starting to get a grip of the concept of locally-made video games. Surely, there are many people installing games from foreign developers. But for Khmer creators, we’re just on the stage of introducing our concepts to the consumers. There are only two or three game developers here. And while some of the game companies get third-party services for the creation and releasing of games, we do everything on our own at DirexPlay. Even the music and dubbing, I had to learn how to play the keyboards and some string instruments so we can put original scoring on the new games. In entirety, our real competitor for our consumers’ attention and time are the foreign mobile games, video and music streaming apps and social media. People hold their phones at least 14 hours a day. Do you think they’ll spend all that time playing games? I doubt that.

GoodTimes2: Are you full-time game creators? How do you earn revenues for your games?

Piseth: These are our full-time jobs. With all that we do, it’s really impossible to get other work. We spend all day and all night thinking of concepts and turning those concepts into games. Even in our dreams, we still try to squeeze out good ideas. And in order to create a game that is relevant and appealing to the market, we need to give our focus and time on it. 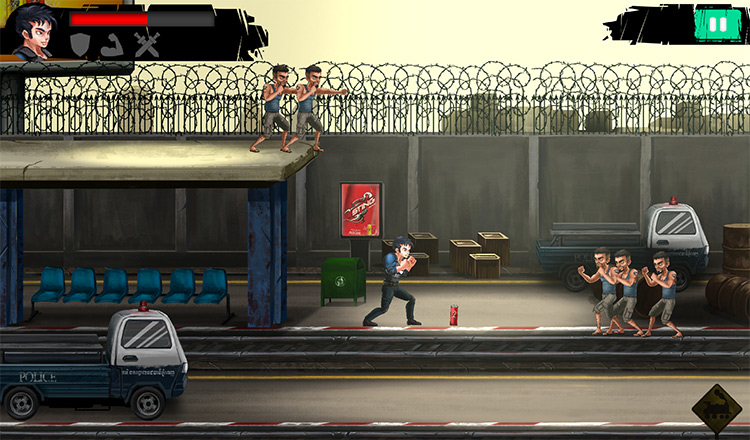 For revenues, we basically earn from the consumer purchases on the games they download. The download is basically free across all platforms. However, there will be times that the player is asked if he wants to buy coins or change the characters, so they have to pay for that. But then, we know that most of our players don’t have credit cards. And even if they have money, it’s unlikely that they’d spend money for a game. So, we also get monetary support from sponsors and clients. For Jailbreak, we had an energy drink sponsoring the game. For our Khmer ECard, we were financed by a soft drink company. For these clients, we always make sure that we serve them without jeopardising the gaming experience of our market. So instead of bombarding them with banner ads that will distract them, we use the products as part of the environment or part of the game itself. For example, when a player dies, he can choose between watching a 15-second video advertisement or go back from the start. I’ll call it a creative and innovative way that produces a win-win result for us, the clients and the gamers.

The call of the jungle and the hills