Home - So near, yet worlds apart

The village of Chong Kos – or Kampong Sampan, as it is known among its residents – is located quite literally a stone’s throw away from the glowing neon lights in the heart of Phnom Penh. The village lies on eastern bank of the Mekong, at the confluence of the four rivers, which is widely believed to be one of the most auspicious location in the capital, the Chaktomuk. Given the proximity to Phnom Penh’s CBD, one may be forgiven for thinking that living conditions here should at least mirror that of the city’s peripheral districts and communes. But the Cham minority group that has lived along the Mekong river basin for generations are eking out an existence that cannot be compared to their urban counterparts across the river. Rama Ariadi recently joined a team from Maybank Cambodia that distributed food aid to this Cham community, at the start of the Muslim holy month of Ramadan.

As soon one steps into what passes as the unofficial boundary of the village, it seems like taking a step back into time, if not an entire geographical region altogether. As midday approached, the sound of the adzan – the Islamic call to prayer – broke the flurry of activities across the village. Local residents began to move, almost in unison, to a makeshift stilt house constructed out of corrugated iron and scrap fibreboards, with sheets of tarpaulin doubling as windbreakers along the walls. What looked like a place to hide underneath the oppressive sun, turns out to be a surau, a small prayer hall where local Cham villagers congregate five times a day to pray – from sunrise till sundown.

Surau Al-Mukmini, as the prayer hall is known, is the sole place of worship for more than 290 families that reside in this shantytown of a village. Not only does it act as a place for worship, it is also a place for locals to mingle with each other in the absence of a proper shelter – as many Cham residents, who traditionally rely on the bounties of the Mekong, continue to live on boats, precariously moored to eastern bank of the Mekong and at the mercy of the river’s ebb and flow. With the implementation of the ban on commercial fishing on waterways that intersect the city’s boundaries, many are living in a state of despair – with no job prospects, and no plot of land to work. Many residents have no choice but to wait, may it be for aid, or the plot of land that they were promised should the Chams of Chong Kos agree to relocate away from the riverbank.

But on one sunny Sunday, the surau was abuzz with activities. Residents left their huts in hordes to the humble prayer hall – not to pray, but to queue for rations that are traditionally given away by affluent Muslims to ‘cleanse’ their earnings ahead of the first day of Ramadan, which fell on May 17. Despite the ground crew’s efforts to keep every beneficiary in line (stampedes that resulted in death have been widely documented across the region), the crowds seemed completely oblivious to the instructions and wait for their turn.

To some, this may seem like a blatant disregard for decorum and manners – but if one takes a more sympathetic perspective, it reflects a much bleaker reality. It is a scene that reeks of desperation – made worse by the fact that this other face of daily life in Cambodia is surrounded by an ever-increasing number of grand edifices of modernity; a short ferry ride away, yet worlds apart in reality.

“This is one of the reasons behind our decision to distribute aid in Chong Kos,” said Nurbazilah, the manager of International Programme of Islamic Relief Malaysia (IRM) – one of the main implementing partners of Maybank Cambodia’s first ever corporate social responsibility (CSR) project in the Kingdom.

“Zakat funds should ideally be distributed to the poorest subsection of the community, and we have identified Chong Kos as one of the poorest Muslim communities within the greater Phnom Penh area,” added Nurbazilah, who uses only one name.

This is corroborated by the findings of Cambodia Care – the local implementing partner of IRM in Cambodia – which found that the average income of a Chong Kos resident hovers around $2 per week, which they earned by scrounging scrap metal and unwanted refuse from the city. This heartbreaking reality really is impossible to miss, as scores of makeshift huts litter what tiny stretch of land is left along the riverbank.

Further up the river, what used to be fishing boats that were once used by Cham fishermen to seek out sustenance have been repurposed into floating homes. Forget modern amenities that Phnom Penhers take for granted – what passes as a source of electricity are modified car batteries and old generators that have seen better days. What counts as a water source is the mighty flow of the Mekong, to be used for bathing, cleaning, and even cooking. After all, no matter how unfortunate this may seem – beggars cannot be choosers, right?

Nurbazilah added that although there were pressing concerns that needed to be addressed immediately, there needed to be a more holistic approach to tackle the root causes of the problem. A way through which this issue could be addressed, according to Nurbazilah, is by increasing and improving access to basic education. After all, as much as poverty is a state of being, it is also a state of mind.

“From our observations, we still need to educate the children, as they need to be aware of what the future holds for them and their families,” she added. “They need to think beyond mere survival, and help their families to escape the vicious cycle of poverty.”

Sustainability is, indeed, a very important aspect of aid that is often forgotten by many charity organisations and non-government organisations that distribute aid to many disadvantaged communities. Unsustainable distribution of aid could create further a cycle of dependence – which is especially dangerous for a community that is already highly dependent on handouts to survive, day by day.

“This is why our main goal is to focus on capacity building,” said the chairman of Maybank Cambodia, Dato’ Johan Ariffin. “Whatever aid that is being distributed must be geared towards empowering these communities by providing them with the right skill set so that members of the community could lift themselves out of poverty.”

“We have discussed the possibility of implementing other programmes in the future with the local community leader of Chong Kos,” added Nurbazilah. “Some of the programmes that we hope can be implemented in the near future include programmes that are specifically aimed to empower women in the community to weave and sew to generate extra income for their families, and construction of latrines to improve sanitary and health conditions of Chong Kos residents.”

As refreshing as these upcoming projects sound, it will take some time for local residents of the village before they can reap the benefits of these upcoming projects. However, a journey of a thousand miles begins with a single step, and one would find it hard to argue that this a step in the right direction. 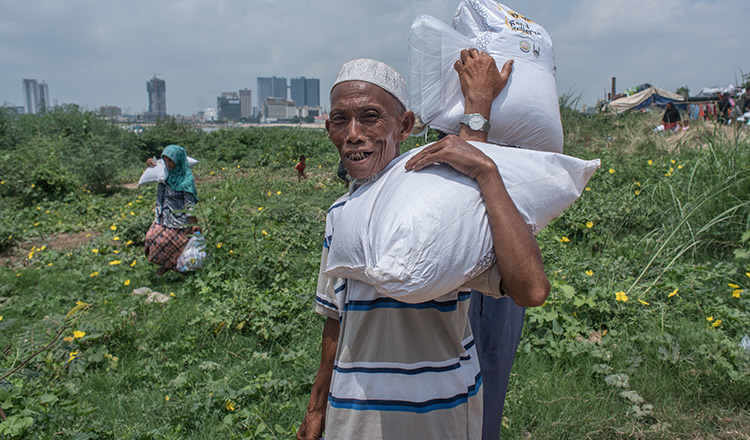 While they may have to continue to make peace with their living conditions for the time being – at least when the sun rose on the first day of the holy month, residents of Chong Kos could have a taste of what their more affluent Muslim brethren are having to start their first meal of Ramadan, even if it is only for just one morning.

The GURUS of hypnosis!