Home - The GURUS of hypnosis!

The GURUS of hypnosis!

One of the best recordings this year to come from Links Cambodia, run by musician Adrien Gayraud (Moi Tiet), will undoubtedly be Hypnotic Fist Technique’s ‘Golden Age: The Sequel’.

“This is just the beginning, too.The facilities are starting to pop up here and there where you’re able to record top quality stuff,” Hypnotic Fist’s drummer Todd Bazley says in a video produced by What’s On Phnom Penh, just before their album launch last Saturday at Hard Rock Café Phnom Penh.

“Our album is out there and hopefully it’s going to push other people to realise that they, too, can produce top quality stuff here in Cambodia,” adds Todd.

The album’s superb audio quality is due to the ingenuity of sound engineer Elie Ommering, with the final mastering done in France’s Studio Vox.

There are 12 tracks in ‘Golden Age: The Sequel’ and a skit titled ‘Fried Chicken Technique’, which co-vocalist/emcee Gaurav Raul says represents a pattern.

“We consider the 90s as the Golden Age of hip-hop and a lot of the albums back then had a very strict pattern to them. The second song will be an important song, as will be the seventh song and the tenth song. An intro, an outro and two skits in the middle and stuff like that,” he explains in the What’s On Phnom Penh video.

Michael Bridgett aka Mike Dynamo, the other emcee of Hypnotic Fist, elaborates further.

“Golden Age: The Sequel as a record is designed to give you that feeling of diversity and be brought along – whether it’s the more aggressive side or the softer side. And then as far as the lyrics go, too, these are not shallow mainstream songs,” says the burly Texan.

Take the Leonard Cohen-like lyrics of ‘Jesus Piece’, for instance:

“There is only one way to learn how to read in an opponent’s attack,

You have to get hit a lot,

So many times you have your teeth clattering along the pavement like a dice game,

Won’t make you rich, when you think no one’s looking,

But the strong, and the too strong, no need to see you winch when you understand your weakness,

Your presence is enough to come down from the mountain top,

Your fortunes are good enough for the demigods to stoop down in grace.” “This is a body that you can take with you and listen. This is who we are as a collective. It’s also a golden opportunity, with this album, to enjoy life and do something nice for yourself,” says Mike Dynamo in the pre-album launch video.

“We are this group of very diverse musicians that came together – we were into reggae, hip-hop, R&B, metal, grime. There were a lot of eclectic influences. So we’d mix it up. It’s not just being the boys in the band. It’s really about creating an experience that’s worth going to see live.”

‘Golden Age: The Sequel’ starts with the band’s signature ‘Hypnotic First Technique’ – a racy hip-hop number. It later moves to a more mellow ‘Peaches’ with its Lynyrd Skynyrd-like rock rhythms. ‘Best Not Delay’ starts off as a slow rock number and then the rapping follows. ‘The Second You Wake Up’ is a soulful R&B and ‘Still Not Over You’ has a superb lead guitar riff by Ian Francisco aka ‘I the Mic Factor’.

All in one, the album has state-of-the-digital art synth squalls, heavy metal and rock blast beats, slick guitar excursions and old-school rap flows.

Hypnotic Fist Technique was born in Show Box in 2014 in one of its open mic sessions, and Gaurav recalls the band’s birth in the pre-album launch video.

“I started going to Show Box about four years ago where a lot of musicians were coming together and showing people what they’ve got.

“Ian and Mike Dynamo had already moved to Cambodia. I saw Ian perform with his electric guitar and I said wow! Our first drummer was Henrik, from Norway, and he was just busting out some sick beats on the drum. There was nobody getting up on stage. He then turned to us and asked: ‘Why don’t you come up and drop some freestyles to this beat I’ve dropped under?’

“I decided not to back down. You can’t do that in hip-hop. So I decided to get up there and just started flowing on it. When I woke up from the stupor of my performance, I was just looking around and everybody was just speechless!”

Mike Dynamo, who was also in Show Box, then decided to also get on stage.

“Mike saw me perform as I was just rapping over these beats and he just happened to be walking by. He asked me: ‘Can I get on this?’ And I replied: ‘Yeah, for sure.’

“So both of us started jumping on the mic and eventually one by one came. Danzo Kelly picked up the bass and Ian picked up the guitar and before you knew it, we were performing our asses off,” Gaurav recalls.

Mike Dynamo adds: “It was just freestyle and we were going back and forth. It just grooves out of nowhere – whatever we could do just at that moment. 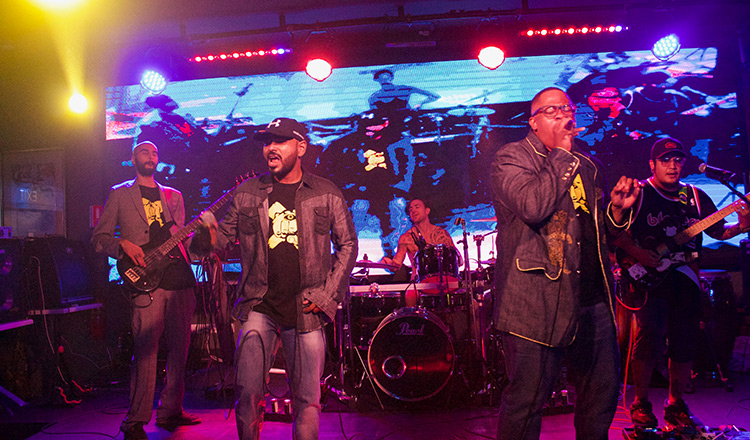 “We very much came out of this culture of open mic, where we’re gonna get together and make something happen.”

And on last Saturday night, magic did happen in Hard Rock Café when Hypnotic Fist Technique took to the stage. The golden age of hip-hop had returned where rhymes matter most. Hypnotic Fist’s lyrics don’t have answers but it’s the sound of honest confusion that’ll get you dancing. Enjoy LIFE!

‘Golden Age: The Sequel’ costs $20 and can be downloaded from https://thetechnique.bandcamp.com 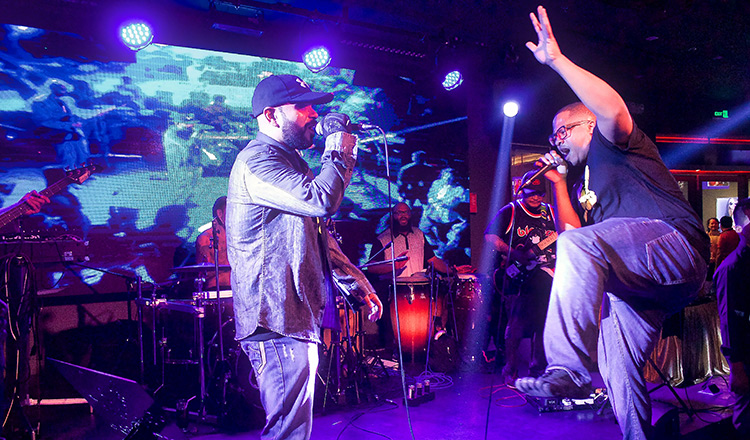