Deputy Prime Minister Ke Kim Yan, president of the Cambodia Veteran Association, yesterday awarded medals and commendation letters to more than 1,000 former soldiers in Banteay Meanchey province, prompting a critic to say that more work needs to be done to ensure the well-being of veterans.

Mr Kim Yan said that the award ceremony, held in Phnom Srok district, was part of the government’s effort to examine the well-being and difficulties faced by Cambodian veterans. He also praised the efforts of Prime Minister Hun Sen in developing the country.

“Under the leadership of Prime Minister Hun Sen, the country has become peaceful,” he said. “We are committed to preserve peace that stemmed from bloodshed, devotion and the flesh of our veteran brothers and sisters.” 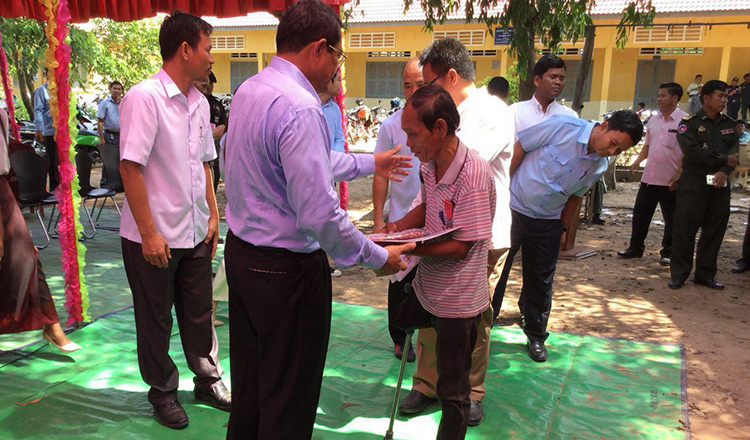 He said that gratitude will come in a form of benefits such as an increase in monthly allowances and free medical check-ups.

San Chey, executive director of the Affiliated Network for Social Accountability, said that the awards were a nice gesture, but urged the government to focus on improving living conditions for veterans.

Mr Chey said that he wants to see those who fought for the country treated with more dignity by honouring their sacrifices made during some of the darkest times in the history of the country.

“The medals and commendation letters are just a short-term gift and it helps the least,” he said. “The government has to find a better way to provide veterans with better living standards like implementing the social security fund more effectively.”

Prime Minister Hun Sen in December said that 200 houses had been given by senior government officials to the families of veteran soldiers stationed along the Cambodian-Vietnamese border in Svay Rieng province.

General Kun Kim, deputy commander-in-chief of the Royal Cambodian Armed Forces, said the houses given to the veterans’ families are about six metres wide and seven metres long, with accompanying land 40 metres wide and 50 metres long.

Cambodian veterans are given $105 per month in pension while members of their families receive the same benefits as civil servants and members of the armed forces.

Villagers locked in land dispute dispersed by the authorities