Home - Villagers locked in land dispute dispersed by the authorities

Villagers locked in land dispute dispersed by the authorities

About 100 security personnel were deployed yesterday to evict 600 residents who have been occupying Wat Chas pagoda in Chroy Changva district after they refused to retreat pending a Land Management Ministry decision on a petition to solve land disputes in three provinces.

Security personnel, made up of district security guards and military police, were deployed to the pagoda and told the residents that they could no longer occupy the location, citing security concerns.

Ol Sokyos, an admin officer with the Land Ministry, met with the residents at the pagoda prior to their dispersal and told them that officials are looking for a viable solution for all stakeholders.

“I come here on behalf of the ministry to tell you that the ministry is working to find a solution,” he said to the crowd. “As long as there is a petition, expert officials will examine and solve your problem.”

“The authority and ministry representatives told them to go back to their homes in the provinces while awaiting a solution scheduled for Friday,” he said. “The district authority forced the people to go back, we had no choice but to go back and wait for the provincial authorities and ministries.” 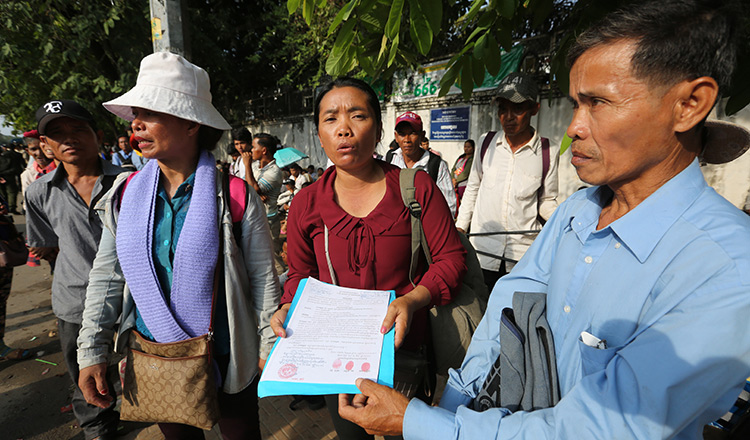 A villager from Kratie province’s Snuol district, who was only identified as Chhayna, said that about 500 people representing 665 households locked in a land dispute with Memot Rubber Plantation flocked to Wat Chas pagoda nearly two weeks ago after filing a petition with the ministry and years of government inaction.

“We came to Phnom Penh but now they are preparing a bus to take us all home,” he said. “If we don’t, we fear that they might take legal action against us, so we are complying.”

Rout Sophal, a representative of 210 households from Kiri Sakor and Botum Sakor districts in Koh Kong province, said that the forced dismissal was an effort to intimidate people.

“We are really disappointed that we can’t stay here anymore. We were just here waiting for the result of our petition,” he said. “But it turned out that security forces want to dismiss us, so we have no choice but to go back first and wait for the results.”

Ouk Pheaktra, Koh Kong province deputy governor, told residents from his province that the solution is going to be delivered near their homes and directed residents to a bus that will take them back to their homes.

Residents responded by vowing to return should negotiations fail and a solution is not agreed upon.

Met Measpheakdey, City Hall spokesman, could not be reached for a comment, while Khlaing Socheat, deputy governor of Chroy Changvar district, declined to comment.

Hundreds of villagers demand their land