The Royal Government is expected to award almost 700 million riel – over $170,000 – to medallists from the recently concluded 9th Asian Taekwon-Do ITF Championships in Ulaanbaatar, Mongolia.

The Cambodian delegation arrived back in Phnom Penh yesterday morning and were given a warm welcome by Keo Remy, Cambodian politician and Chairman of the Taekwon-Do Federation of Cambodia, and Ouk Cheakhat, Director of the General Department of Sport and other officials from the Ministry of Education, Youth and Sport (MoEYS). Representatives from the Embassy of North Korea were also part of the welcoming contingent.

They were then whisked away to the National Sports Complex in the north of the capital where they met with Sean Borath, Secretary of State at the MoEYS who convened a welcome meeting with other officials praising the young medallists for their success.

Cambodia sent 24 athletes to compete for medals in the regional event with competitors among a field of 20 other nations. 13-year old Sopheak Chan Oudom topped the medal tally for Cambodia, with a remarkable haul of three gold, a silver and a bronze. Other medallists included Pal Chivorn and Mat Sok Mean.

This latest crop of medal wins is expected to do much to boost the prestige of the sport in Cambodia. In March, The Taekwondo Federation (ITF) said it would be pushing to include the sport at the 32nd Phnom Penh SEA Games in 2023.

“The tournament of ITF Asian Taekwon-Do Championships in Mongolia is over, said Mr. Remy, who also serves as President of the Southeast Asian Taekwon-Do Federation – ITF. “The Cambodian team defeated traditionally strong Kazakhstan, who have always been gold medalists. Whether it is Asia or the World, our coaches make sure our players are given the best chance.” 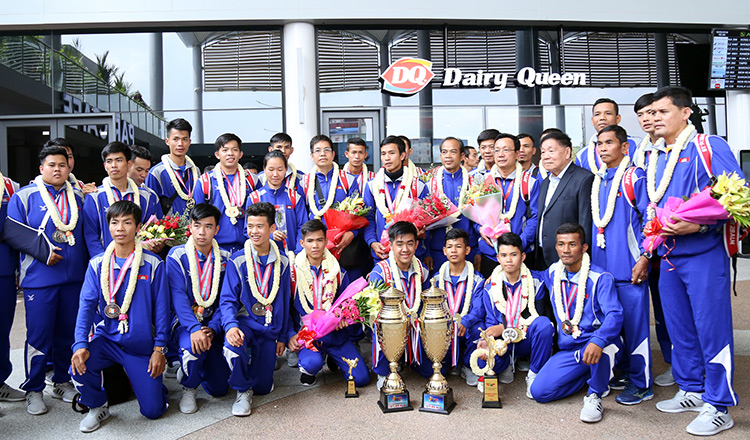 Their success was also celebrated by the Ministry of Education, Youth, and Sports who posted; “Congratulations ITF Cambodia winners of medals in Mongolia, reads the statement. “Winning medals in Taekwondo is great pride for Cambodia on the international stage. It is proof that the ability of Cambodian players is as high as foreign players.”

A sub-decree announced in July, 2015, declared that the government would award cash prizes for silverware-winning athletes from a special fund to promote the nations sporting development. After capturing a total of 21 medals in Mongolia, the government will have considerable outlay in rewarding the kingdom’s newest taekwondo stars.

The athletes, their coaches, and ITF Cambodia officials will meet Prime Minister Hun Sen at the Peace Palace on the afternoon of May 22nd where their achievements will be recognised.

In December 2017, the government dished out more than $1.7 million in prizemoney to 211 medallists from the 29th 2017 Kuala Lumpur SEA Games, and other international sporting competitions.

The Cambodian Premier has made rewarding the kingdom’s sporting successes a feature of his recent leadership.

“The values and honour of the children are national pride, especially when they are awarded medals and our country’s flag [is raised] and national anthem [is played], the Prime Minister said during December’s awards ceremony at the Peace Palace in front of over 200 athletes and coaches.

“This is the most important value. And on the international stage, regardless of whether it is a big or small country, rich or poor country, we will do our best. We will continue to bring more gold to our country, especially in the SEA Games in 2023 here in Cambodia.”

What’s on the cards for the Premier League’s top six?