A total of 13 villagers have died and nearly 300 have been hospitalised since last Thursday, when people from two villages in Kantuot commune first began falling ill.

Mom Kham, chief of Thmey commune, said yesterday that 51 people from two villages in his commune were sent to the local health centre and the provincial referral hospital for treatment after claiming to be poisoned after drinking water that came from Prek Ter stream.

“Twenty-nine villagers from Pha’ea village and 22 villagers from Treap village were sent for treatment at Thmey commune health centre and Kratie provincial referral hospital,” he said, adding he did not know the cause of their sickness.

“I don’t dare to speculate on how they got poisoned because expert officials are working to determine the truth,” he said.

Phlel Chey, 54, a Bunong indigenous villager from Pha’ea village who received treated at the provincial referral hospital, said he was poisoned by herbicides and pesticides present in Prek Ter stream.

“I suspect that I was poisoned from herbicides and pesticides because I drank water from Prek Ter stream,” he said, adding that most people got sick because they drank water that originated from the stream. 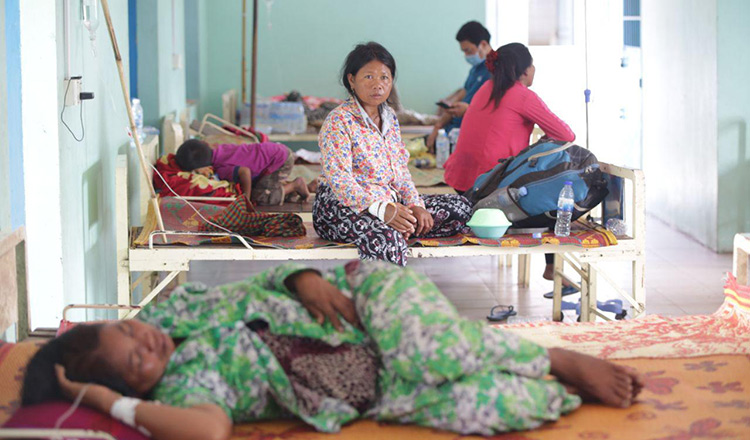 “My wife Phin Ham, who was 28, and I were poisoned and we were sent to provincial hospital but my wife died at the hospital after vomiting a lot,” he said, adding he was now left with three small children.

“I pity my three children, especially my youngest two-year-old daughter who always calls out for her mother.”

Keang Hong, director of the Kratie provincial referral hospital, said yesterday that only about 50 villagers were still receiving treatment there.

“Most of them have been allowed to return home because their heath has returned to normal. About 50 villagers are now being treated at this hospital,” he said.

Kratie provincial Governor Va Thorn declined to comment yesterday, saying he was tired of talking about this case.

The Health Ministry issued a statement on Tuesday, saying results from laboratory testing showed that the sample of water was contaminated by herbicides and pesticides that had run off into Prek Ter and O’Koki streams.

The statement said 13 villagers have died and 293 people have been hospitalised, including 69 children under the age of 13. Only 58 of the 293 people appear to have been poisoned from the contaminated water.

“Most of the people got sick because they drank rice wine but some drank tainted water from Prek Ter stream,” the statement said.

Chhneang Sovatha, director of the provincial health department, said on Tuesday that after being examined, most victims were found to have been poisoned from methanol.

Meanwhile, 14 people were also hospitalised in Mondulkiri province last night after drinking contaminated water, according to the provincial governor.