Prime Minister Hun Sen yesterday appealed to all authorities to prepare for flooding and rescue villagers when natural disasters occur.

Speaking at the 155th anniversary of the World Red Cross, Mr Hun Sen said that this year’s weather forecasts predicted there will be heavy flooding across the country.

“Due to weather forecasts, I would like to appeal to all authorities to prepare for flooding,” he said, noting that heavy floods could lead to a need to rescue victims affected by the deluge.

Mr Hun Sen said that floods would be handled by the National Committee for Disaster Management, authorities and the Cambodian Red Cross.

He also called on the Cambodian Red Cross to be well prepared to help affected families.

“The government has prepared some budget and food to cope with the issue,” Mr Hun Sen said. “If flooding does not happen, we will keep it for next year.” 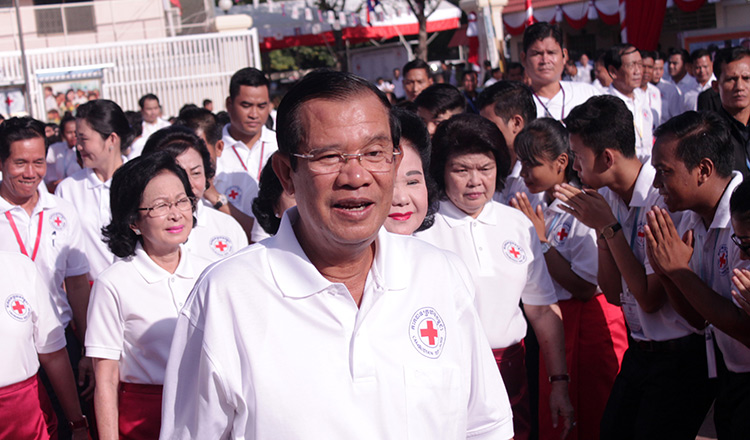 According to a statement from Minister of Water Resources Lim Kean Hor last month, Cambodia will be affected by El Nino and La Nina. This will cause heavy rainfall and possible floods.

Mr Kean Hor added that the level of the Chaktomuk confluence − where the Mekong, Tonle Sap and Bassac rivers converge in Phnom Penh − could reach 10.05 metres, which would cause heavy floods.

Last week, an education department official said that some schools in Banteay Meanchey province were affected by floods, causing students in two districts to miss classes.

A third person also died and three others were injured in Svay Rieng province and dozens of homes were damaged by storms in Pailin, Banteay Meanchey, Svay Rieng and Battambang provinces.

Flooding hit 16 provinces, leading to 17 deaths and the evacuation of 1,734 people, the report added.

At least 14,341 houses were affected by flooding, with 3,456 hectares of rice crops and 355 hectares of other crops damaged as well.