Kratie provincial authorities yesterday distributed clean water to villages where at least 11 people have died and more than 100 others have been hospitalised since Thursday after drinking tainted water from the Prek Ter canal and rice fields in Chetr Borei district’s Kantuot commune.

Provincial Governor Va Thorn said yesterday that so far 11 people have died and more than 120 others have been hospitalised after they drank water suspected of being contaminated with insecticides.

“Eleven people have died so far, of whom four are men, and 121 other people, including children and elderly people, are receiving treatment at the referral hospital and provincial hospital. About eight who were in serious condition were sent to Calmette Hospital in Phnom Penh,” he said.

“I just came back from the village. We sent health officials and armed forces to guard and help the people in the villages where many people are sick and have died.”

Mr Thorn said that he also ordered the delivery of two fire trucks of water and two trucks of fresh water to be distributed to villagers.

Police and local authorities have also used loudspeakers to inform villagers to stop using or drinking water that they took from the canal, he said.

“We banned them from using water from a canal in the village that we preliminarily suspect was contaminated by insecticides which farmers used to kill weeds in their rice fields. It then flowed into the canal when it rained,” he said.

Mr Thorn added that residents from two villages – Sre Norn and Alorch – have used water from the canal for a long time, but have never experienced any serious problems.

“We are waiting for the result from the laboratory in Phnom Penh where our health officials sent the sample,” he said. “We stopped them from using the water in the canal for a while already and we may dig a pond for them instead of using water from the canal again.”

Phon Phea, Kantuot commune police chief, said that the situation had improved slightly as no new residents had fallen ill from yesterday morning until about 4pm.

“We are using loudspeakers to broadcast in the villages to inform villagers to stop using water from the canal and not to use the rest of the water that they took to use at home. We have clean and fresh water to distribute to our villagers to use instead,” he said.

Mr Phea said the water could not have been poisoned by mining because there were no mining operations in the area. 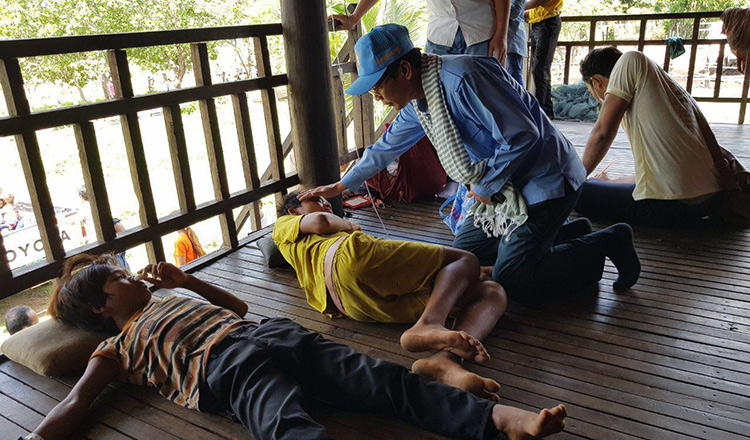 “From what I know, there’s a place where people are mining in another commune that is far from here, but the villagers there have not had any problems. So, I think it’s not the reason why our people have died and are sick,” he said.

The first person started to feel sick and died on the way to the health centre on Thursday and four more people fell ill and died the following day.

“They got sick and died too fast. Some of them just had a headache, felt dizzy, vomited and had difficulty breathing. Some people died on the way to hospital and some died at the hospital,” Mr Phea said. “It is a strange disease that we have never met before. They died so quickly.”

Or Vandin, spokeswoman for the Health Ministry, said yesterday that the ministry’s working group was investigating the case.