Cambodia expects that crop yields of rice, corn and beans will be better than average this year, according to the prediction of the royal oxen in the annual Royal Ploughing Ceremony held yesterday in Svay Rieng province.

The ceremony this year was presided over by King Norodom Sihamoni and other high-ranking officials who performed the prediction ceremony following ancient customs and announced the beginning of the rainy season.

In the Royal Ploughing Ceremony, the Brahmin priest and astrologer places seven different agricultural products in bowls, which the royal oxen choose from after ploughing three rounds on ceremonial ground.

The products include rice, corn, sesame seeds, green beans, grass, water, and wine. The consumption of each has a different meaning. 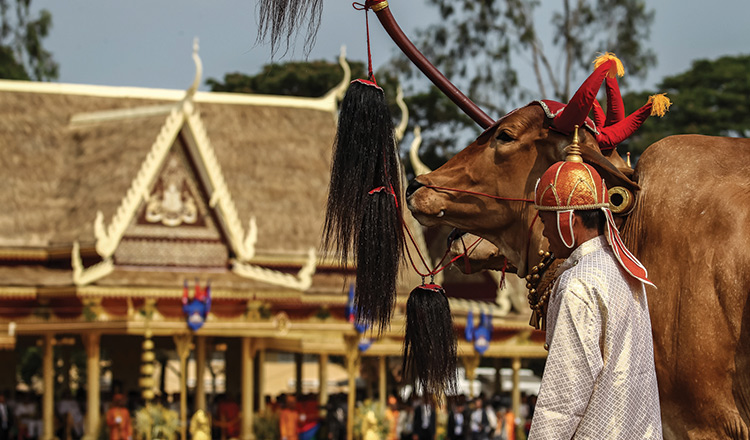 “For the growing season in 2018, the yields of rice, corn and beans will be good,” he announced.

“All the predictions are not 100 percent right, but it encourages farmers to work harder to cultivate more crops,” he said. “When farmers know the prediction that yields will be good, the farmers who abandoned their fields or did not cultivate crops last year will return to cultivate.” 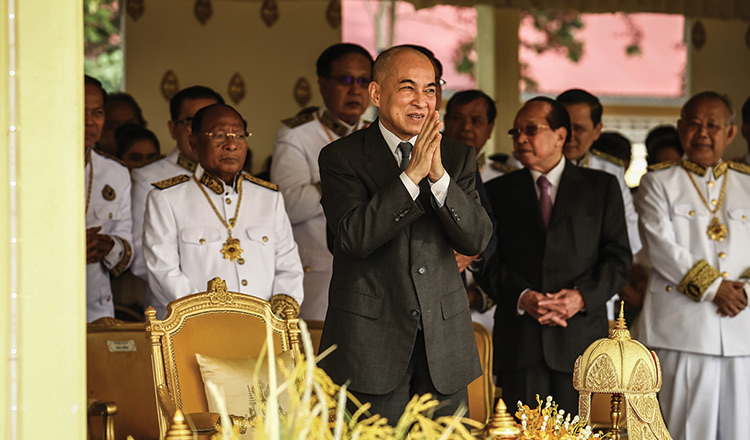 Mr Vanhan said that in 2017, the total output of paddy rice both in the dry and rainy seasons was about 10 million tonnes.

He added that despite the prediction from the ceremony, farmers should be able to choose the type of land and crops to cultivate.

Khieu Saron, 38, living in Svay Rieng province’s Romeas Hek district, said that she and other villagers, who are farmers, strongly believed in the prediction of the royal oxen.

“According to what I’ve noticed, in years when fewer yields are predicted, my rice yield is less because there are always pests , and sometimes there is a lack of water for the rice to grow,” she said. “In contrast, when the prediction is good, every farmer is able to grow well and get good yields.”

Yang Saing Koma, an agricultural expert and former president of the Cambodian Centre for Study and Development in Agriculture, said in the past that farmers should not rely solely on the climate and must have their own strategies to cope with climate problems.

He said Cambodian farmers in the past have often been faced with market crises, such as when after harvesting they had no market to sell or had to sell at cheaper prices.

“If farmers want to farm, they need to have a clear strategy to cope with the weather problem,” he said.

Board wants engineering on university curriculum